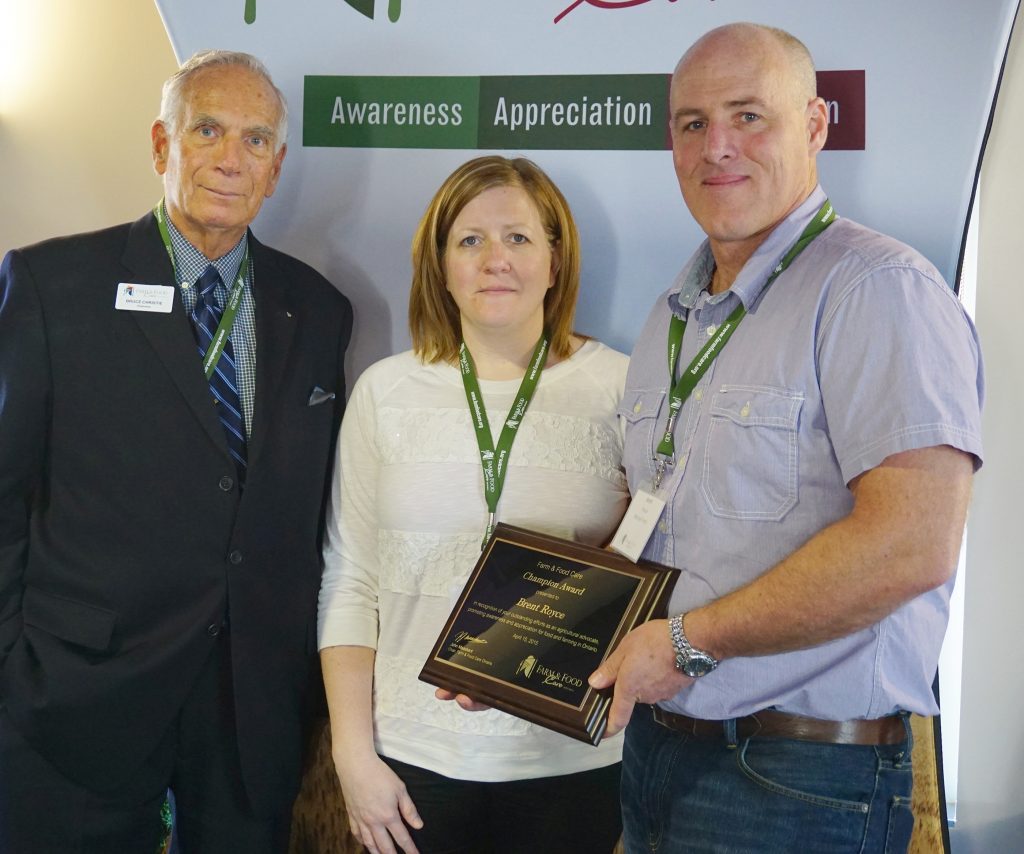 April 15, 2015 – Brent Royce of Listowel has been named the 2015 recipient of the Farm & Food Care Champion Award. The award was presented at Farm & Food Care’s annual meeting on April 15 by Bruce Christie, a Farm & Food Care board member. Royce was nominated for the award by Turkey Farmers of Ontario (TFO) and the Ontario Federation of Agriculture.

Royce grows crops and raises turkeys on his family farm and has been involved in farming for his entire life. Royce is a strong advocate for agriculture, using every opportunity available to him to talk about farming with non-farming Canadians. He was among the first to sign up for Farm & Food Care’s Speak Up ambassador training, and has since become a regular interviewee by many Canadian (both rural and urban) media sources. Royce also actively engages the public through social media using Twitter.

Since 2011 he has posted over 4,500 tweets about the day-to-day workings of his farm, and has engaged audiences with several blog posts. Royce and his family also hosted a television crew to film their farm for a virtual turkey farm tour which is now housed at www.virtualfarmtours.ca.

Royce is also involved with both the Innovative Farmers’ Association of Ontario and the Perth County Soil and Crop Improvement Association. In its nomination, Turkey Farmers of Ontario described Royce as “a passionate turkey farmer and great agricultural advocate.” His industry involvement and public outreach, said TFO General Manager Janet Schlitt, makes him an ideal candidate for the recognition.

Bruce Christie, chair of the Farm & Food Care Foundation, describes Royce as a worthy candidate for the award.

“Ontario agriculture needs strong spokespeople to talk about food and farming,” says Christie. “Mr. Royce uses every opportunity to do just that whether it’s engaging through social media or talking with consumers one on one.”

The award was originally created in 1999 by the Ontario Farm Animal Council (OFAC) to recognize individuals, organizations and businesses. With the amalgamation of OFAC and AGCare in 2012, the award was renamed and is presented annually to a worthy agricultural advocate.