New research provides insight into why it happens and how to improve its management. 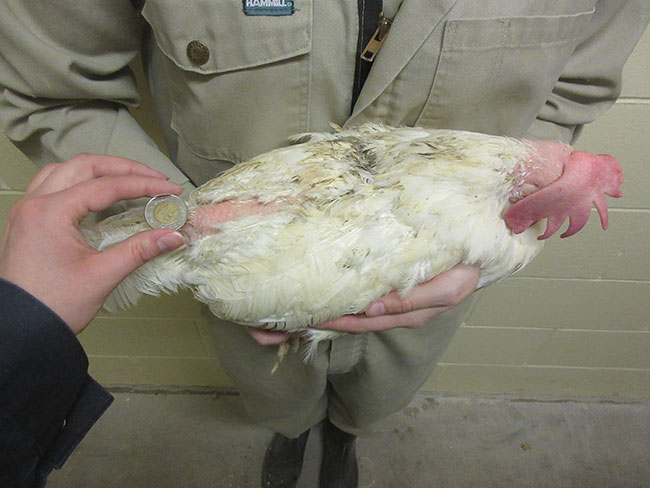 As more Canadian egg producers continue to adopt enriched and cage-free layer housing, how farmers can optimize welfare of hens in these systems is coming into the spotlight.

Postdoctoral researcher Nienke van Staaveren and associate professor Alexandra Harlander in the department of Animal Biosciences at the University of Guelph have published landmark initial studies on what factors affect the extent of feather damage (FD) from feather pecking in these housing systems. The work was part of a project funded by the Egg Farmers of Canada.

The scientists note that while more research is required, some insights for producers can be gleaned from these studies in terms of how FD can be minimized.

Loss of feather cover is a serious welfare matter that can eventually progress to injuries and mortality. Reduced feather cover also makes it harder for birds to maintain their body temperature and balance. Additionally, FD increases production costs due to increased mortality, reduced egg production and more.

Experts generally believe that feather pecking is a redirected foraging/feeding behaviour caused by the stress of living in a barren environment. But nutrition, genetic and barn management factors can all play a role in its extent. “The climate, feeding and other management practices in alternative housing systems here in North America can also differ from those in Europe,” van Staaveren adds. “Though numerous studies have been conducted in Europe, we believe our studies are the first large-scale ones in North America.”

Notably, the flocks surveyed in this study had been placed on-farm between October 2016 and December 2017, a period where Canadian egg farms were undergoing many changes relating to a new code of practice.

Cage-free systems
Scientists have established in previous studies that feather pecking behaviour is initiated by a small percentage of birds in any flock and then the behaviour spreads. In the large flocks housed in cage-free systems, FD can therefore be very extensive.

In their cage-free housing study, van Staaveren and Harlander received completed surveys from 39 farms with cage-free systems (having sent out surveys to many more) – 17 single-tier systems and 22 multi-tier aviaries. To fill out the survey, farmers visually assessed 50 birds in a flock for FD using a simple scoring scale and answered questions related to housing and management.

On average, about a quarter of the observed cage-free birds exhibited some form of FD, either moderate or severe, but van Staaveren says this is likely an underestimation of the prevalence of FD typically exhibited on egg farms in Canada. “It’s because some of the surveyed flocks were relatively young, and research has consistently shown that FD increases as birds age. We found similar results where FD increased by about one per cent for each week that the flock aged, which can impact a large number of birds.”

Flock age aside, van Staaveren and Harlander found two other factors strongly associated with FD in cage-free housing: Floor type and frequency of manure removal. This is no surprise. Feather pecking stems from stress, and birds with more forage/litter substrate on the floor and better air quality are likely to be less stressed.

Specifically, more FD was found in flocks that have all-wire or all-slatted floors. But van Staaveren and Harlander note that these floors were installed before the most recent version of The Code of Practice for the Care and Handling of Pullets and Laying Hens came out, which requires part of the floor to be litter (at least 15 per cent in single-tier systems and 33 per cent in multi-tier). “So, all-wire or all-slatted floors are being phased out,” Harlander says. “It is necessary from a welfare perspective to provide litter substrate for natural foraging behaviour to be expressed, which is the vast majority of natural hen activity each day.”

Researchers haven’t investigated manure removal as a factor in FD much, van Staaveren notes. “In single-tier housing with all wire or slatted floors, manure removal is only possible in between flocks, but in multi-tier aviaries (and enriched cages), manure belts make it possible to have more frequent manure removal,” she explains. “More research is needed, but these results may encourage farmers in general to think about the impact of better air quality and cleanliness on bird behaviour.” 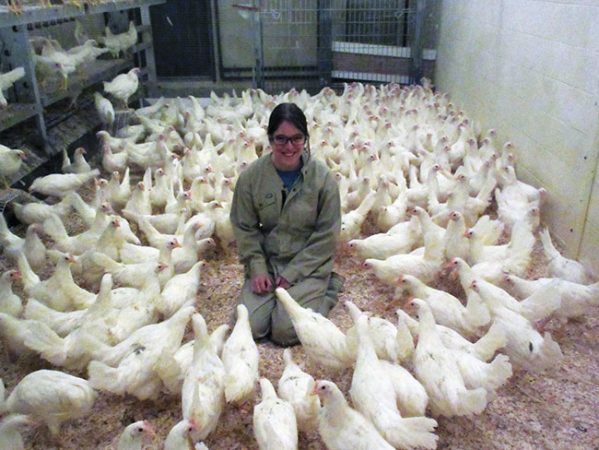 Van Staaveren and Harlander originally wanted to see if there were differences in FD among layer strains. However, in the survey results, there was no uniform strain representation. Nor was there enough flocks of several strains to allow for a good comparison.

“We, therefore, divided it into white and brown-feathered birds and found that FD was higher in brown-feathered flocks,” van Staaveren explains. “This follows results of other studies. We know that birds tend to be attracted to peck further where there is a contrast between brown feathers and areas of white feathers where brown feathers have already been removed.”

In addition to flock age and feather colour, the researchers found midnight feeding and lack of a scratch area were associated with increased FD in enriched housing systems.

Regarding scratch areas, section 2.5.4 of the code of practice requires that after April 1, 2017, “Hens must be provided with a minimum of 612.9 cm2 for each 25 birds.” Again, the flocks surveyed in this study were placed between October 2016 and December 2017, and some producers were still in the process of meeting the code. However, the result from this study of finding more FD in flocks without a scratch area does support the requirement in the code for scratch areas.

Regarding midnight feeding practices, where the lights are turned on and rest is disturbed, Harlander notes that this practice has also been shown to induce stress in rodents. She adds that “if we ourselves are woken up in the middle of the night with the lights turned on, we are generally grumpy the next day. It would seem that hens that have undisturbed nightly rest may be less likely to peck at other birds because they are less stressed and more rested. All kinds of frustrations lead to feather pecking. We think the value of undisturbed rest for hens should not be underestimated and should be studied further.”

Midnight feeding may also contribute to FD in another way, van Staaveren and Harlander note. The practice creates an environment where there is a mix of resting and active birds, and likely increases the chance of resting birds becoming victims of the feather pecking of active birds during that time.

Other research also has determined that the use of dark brooders reduces feather pecking during rearing and into lay. These curtained, box-like heated structures simulate the conditions chicks experience with their brooding hen mother. Experts believe that they are effective in separating active and inactive chicks, allowing resting chicks to avoid pecking from active ones.

Overall, van Staaveren and Harlander found a large amount of FD variation among flocks in both alternative housing systems. While further research is needed, they believe this result indicates that management really matters.

“It’s important to monitor FD, no matter what housing system is used,” van Staaveren says. “Farmers can try different things such as ceasing midnight feedings and see how much FD is reduced compared to previous flocks, for example.”

Key take-aways on feather damage in enriched and cage-free housing
Feather pecking is a multifactorial issue that likely stems from stress, and can happen in all housing systems.

No matter the housing system: