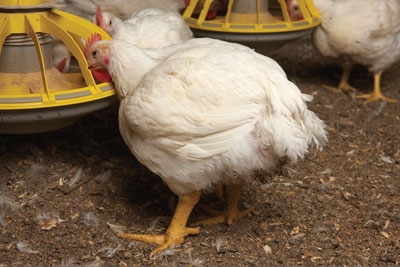 The dry growing conditions of early summer 2012 across some parts of Canada and the United States have already presented challenges for Canadian poultry feed-makers – and those challenges are certain to continue or mount.

“The drought has already impacted feed ingredient and feed prices,” notes Dr. David Trott, a poultry nutritionist at Wallenstein Feed & Supply Ltd. in Wallenstein, Ont. “However, our feed formulations have not changed much to this point (late August), because most ingredient prices have increased by similar percentages.” Over the last few years, Trott has noticed that low nutrient-dense feed formulations have occasionally been more profitable than the traditional high-density corn-soybean meal formulations, but the current price and availability of ingredients typically used in low-density formulas do not make it wise to move in that direction right now.

Lower corn yields across some parts of Ontario and the United States will mean boosted corn prices, and the higher demand for other feed components means that their costs will increase as well. “Usually, the cost of alternative ingredients goes up when corn prices go up,” notes Martine Bourgeois, director of poultry nutrition and development for ShurGain in Quebec and the Atlantic provinces. “What will happen across the country will be different because each region has different issues. We may still use mostly corn and pay the higher price. But we’ll also likely try to use local barley and wheat as well, and look for available byproducts.”

Bourgeois points out, however, that high-quality barley will mostly go to the brewers and high-quality wheat will go for human consumption. “So grain not accepted for those markets will be in demand,” she says, “and even it will be costly. We will have to wait to see about grain quality when the harvest is over.”

“We’re always looking at alternative ingredients, at good value for nutrient content,” notes Dr. Jim Blackman, the poultry nutritionist at New Life Mills, which has three mill sites in Ontario. “We’re already seeing price differentials between grain corn and wheat, wheat byproducts and corn milling byproducts, and we expect costs to increase further. We routinely look at many alternative ingredients, from corn DDGS and bakery byproduct meal to protein from the rendering industry, mill byproducts and so on. Certain industries such as breakfast cereal production might have off-spec material at times as well,” Blackman adds, “We may rely more on enzymes this year. Synthetic amino acid use may also increase.”

Optimizing poultry feed formulations at Belisle Nutrition’s St. Mathias, Que., mill over the coming months will also mean looking at alternative ingredients, says nutritionist (Maritime region) Jeff Walton. “Enzymes will need to be optimized to their fullest, and we may have to consider using more than one enzyme,” he notes. “We will review all amino acid levels in ingredients and be sure safety margins are cost-effective for each ingredient.”

The poultry feed formulations at Wetaskiwin Co-op Association Ltd. in Wetaskiwin, Alta., are wheat-based, and even though wheat yields are expected to be average or better than average in most areas of the Canadian Prairies this fall, its poultry nutritionist notes that higher corn prices will push wheat prices upward. “We’re having a good crop year, but how much of the wheat gets downgraded to feed is yet to be seen,” says Dr. Nancy Fischer. “The availability of grain ingredients will impact how much we have to play with our enzyme and synthetic amino acid levels. We do use some DDGS from wheat, and some from corn, but how much more will come into the rations will depend on changes in other ingredient prices and availability.”

She says many farmers will be storing large amounts of grain while prices keep increasing and will only sell if prices drop. “We must watch for good quality at a good price,” says Fischer. “If we’re going to be using other byproducts that we don’t routinely use, we also have to make sure we have storage space for it all and that quality is consistent.” Wetaskiwin uses soybean meal (mostly from the United States) in its starter feeds, but Fischer says if pricing or availability of that is a problem, they can use canola meal.

Meanwhile, poultry feed production in the Fraser Valley of British Columbia will face some unique challenges, but the location also offers good flexibility in terms of ingredient sourcing.  “We have no grain production here, and get it all from the northwest U.S. (corn) or the Prairies (wheat),” explains Marvin Friesen, CEO of Abbotsford, B.C.-based Clearbrook Grain and Milling. Like Fischer, Friesen expects that, despite an anticipated average or above-average Prairie wheat harvest, drought-stricken corn will affect wheat pricing. In anticipation, Clearbrook will also look at using ethanol production byproducts.

He also agrees that on-farm storage of grain will be a bigger factor than ever in aggravating pricing pressures. “There will also be some price effects on wheat due to the changes in the Canadian Wheat Board,” he says, “but having said all that, we’ll probably use mostly wheat.”

“However, wheat quality is likely going to be very good, and prices will be high. There is also more demand for food-grade wheat than ever coming from Asia with a growing population and growing middle class.”

Corn and wheat in rations
Trott from Wallenstein Feed & Supply Ltd. notes that in recent years, wheat has been used to a greater extent instead of corn at Ontario feed mills. “In the fall of 2011, wheat was priced significantly less than corn and most feed formulations took advantage of this ‘wheat window,’” he explains. “Some wheat has continued to be used in many formulas as a pellet binder, to increase production throughput, and to dilute vomitoxin from the 2011 corn crop.” He expects that in the coming year, whenever there is at least a six- to eight-week “wheat window” anticipated, wheat will replace corn in many feed formulations.

He has also noticed another trend, which ties in with higher ingredient prices and greater use of wheat, of formulating feed to minimum amino acid levels rather than crude protein. “More synthetic amino acids will be needed,” he says. “Tryptophan could be the next one used in formulations in addition to lysine, methionine and threonine.”

Enzymes, Trott adds, are essential for transitioning from corn to wheat. “Without the appropriate enzymes, changing from corn to wheat formulations has a detrimental effect on gut viscosity and health,” he notes. “However, there is currently enough corn and soybeans in Ontario for feed manufacturing. The drought has not affected this province to the extent it has the U.S. Midwest.”

Drought-stressed corn will have low bushel weight, Trott says, but on a weight basis it should have nearly the same feeding value as non-stressed corn. “To properly evaluate the nutritional value of the 2012 corn crop, protein and amino acids measurements will have to be done,” he explains. “Corn energy levels can be predicted based on proximate analysis of protein, fat, fibre and starch. However, the most reliable information on energy levels in complete feed will come from layer farms – if feed has a lower energy content, chickens will eat more of it and this is most noticeable on layer farms.”

Trott also points out that, going into the fall and winter, it’s important for producers to consider that colder barn temperatures will also have an effect on feed intake. “Therefore, it can take more time to determine if there is a problem with feed energy content,” he says. “Once new crop corn is used, good communication between farmers and feed mills on feed intake and barn temperature is very helpful for giving corn an appropriate nutritional value.” Trott points out that if 2012 corn is low-energy, then either supplemental fat will be added to formulations, or the low-density formulations may become more profitable. “The crude protein and amino acids of DDGS will also be determined so that it is valued appropriately,” he says. “If it is low in protein or energy, then less of it will be used.”

However, he does not anticipate any feed changes occurring that will negatively affect animal health or production. “If there are problems with ingredient quality, then appropriate changes will be made,” Trott says.

“For example, during the past year, corn has been segregated and used based on vomitoxin levels. DDGS was limited more than usual and wheat was used more than usual. Some feeds also used more enzymes and binding agents to further reduce mycotoxin levels. Fortunately, the combination of these strategies sufficiently reduced vomitoxin in complete feed without too much cost.”

Thoughts on toxins
“Although it is difficult to say at this point [late August], the drier conditions in parts of Ontario and the U.S. may result in less vomitoxin issues, but fumonisins challenges may go up,” says Dr. Swamy Haladi, the global technical manager of the “Mycotoxin Management Team” at Alltech Canada in Guelph, Ont. “The challenges in Midwest USA and Eastern Canada will be similar this year.”

Trott notes that use of DDGS (processed from last year’s harvest) by his company has been lower this year due to its very high vomitoxin level, but this year’s should be much higher quality. He therefore may be able to achieve some savings from using higher levels of DDGS this year, but the cost of this higher-quality material is also hard to predict.

“Similarly, in comparison to last year, the new crop wheat has very low levels of vomitoxin, which makes it a high-quality ingredient available for the coming year,” he notes. Fischer says it hasn’t been a wet year on the Prairies and no one is anticipating worse-than-usual mycotoxin problems.

For producers who make their own feed, testing of ingredients will be key, both for toxins and for overall nutrient profile. “Seek out your provincial ag ministry staff for possible alternative ingredient ideas,” Blackman suggests. Fischer notes that many Albertan producers mix their wheat with feed; therefore, they always need to keep on top of wheat quality and consistency. “If they have to buy wheat in multiple batches from different sources, they will have to test it all carefully,” she notes.

Trott agrees that a consistent supply of quality ingredients is very important. He adds, “Like feed mills, producers with on-farm mills can also take advantage of opportunities to use wheat instead of corn, but again, it’s important use the correct enzymes.”