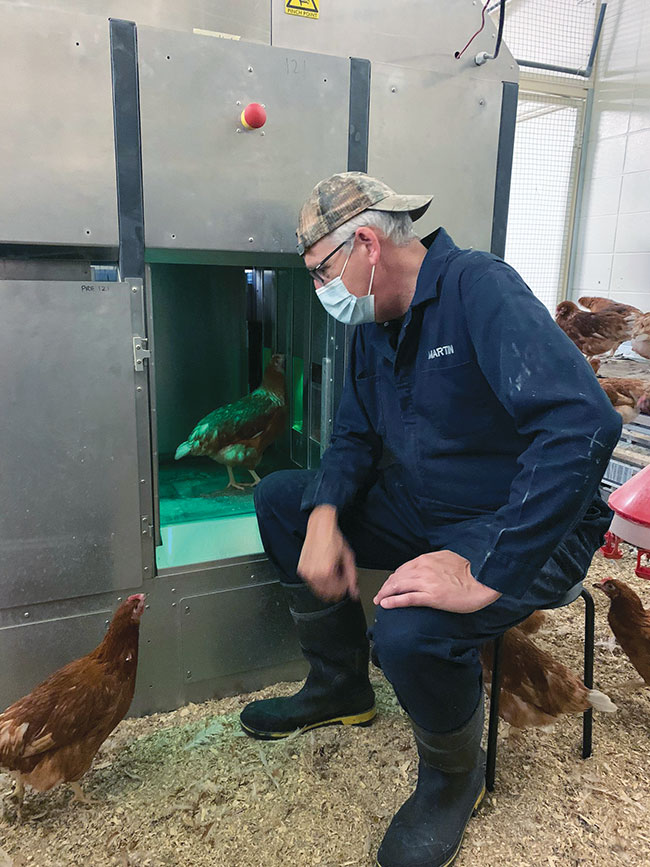 Martin Zuidhof monitors a bird about to feed in the precision feeding system he designed. PHOTO CREDIT: Martin Zuidhof

For the past two decades, Martin Zuidhof has been searching for the best approach for growing a uniform flock of broiler breeders. He’s discovered that offering birds many small meals a day may be the better way.

Zuidhof is a professor with the Agriculture, Food and Science Department of the University of Alberta. He’s in charge of poultry systems modeling and precision feeding in the faculty of Agricultural, Life and Environmental Sciences.

“We did some research in the early 2000s that showed a real shift in the energy priorities of broiler breeder hens when they switch from their growth phase to egg production,” says Zuidhof. “It was such a strong shift that I thought if we can get a uniform flock through the growth phase, we’ll get a very uniform flock entry into lay and that will make the flock easier to manage.”

Broiler breeder flocks are notoriously challenging when it comes to flock management. Raising a uniform group of birds that are of a sufficient body weight and body condition to go into lay together takes timing, patience and as it turns out, great attention to feeding regimes.

Feeding what they need
Zuidhof’s work is based on an entirely new approach to feeding. His precision feeding system is designed to deliver the right feed to the right bird at the right time, based on a programmed growth rate trajectory. The system eliminates competition around the feeder and delivers the amount of feed that a bird of a certain weight needs to reach its target body weight in the desired amount of time.

Over the last 10 years, Zuidhof has researched, tweaked and patented his system – the only precision feeding system in the world for poultry. The system consists of feeding stations that individual RFID-tagged birds are taught to enter. Once inside, a bird is identified and weighed. If it is under the target body weight, feed is dispensed. If its body weight is on target or higher, no feed is offered and the bird is “nudged” out of the station.

While the system is not yet ready for commercial use, Zuidhof has been conducting trials over the past five years. The researcher’s work has provided some very surprising results and opened up new opportunities for where he sees the feeding system going next.

Looking for the best body weight
Some of his early findings with female broiler breeders on precision feeding fundamentally changed his approach with the system. Birds were fed to various body weight targets, some lighter and some heavier than the average. Lighting was also a variable in the early trials.

In one treatment group where birds were raised to lower body weights with suboptimal lighting, an astounding 38 per cent of birds did not come into lay. The birds reached their target body weight but were not in adequate body condition. The response was completely unexpected. “I have never seen birds not come into lay,” says Zuidhof. “This early work was unprecedented, and the precision feeding system uncovered the fact that leaner birds didn’t have enough reserves to come into lay.”

Those early results continue to guide the next steps for Zuidhof, his team and the precision feeding system. It’s important to note that those heavier body weights that delivered a better transition to lay, don’t necessarily translate into more feed per chick.

“As long as birds had enough fat reserves, we could get them into lay with four to five per cent less feed using the precision feeding, than on conventional feeding programs,” says Zuidhof. “That was one of the results that really convinced me that body condition is a huge priority for birds to start laying.”

The benefits of a bigger bird
Zuidhof is about to start a new project with Aviagen, building on the knowledge gained in earlier research. Using precision feeding, they’ll compare various body weight targets – up to 20 per cent more than current recommendations – to find the optimum for broiler breeder females that will raise a healthy, uniform flock with enough body condition to come into lay.

He expects to learn a lot about the interaction between feeding levels, body fat, body weight and reproductive efficiency in heavier birds. For Zuidhof, there is no question that the target body weight for broiler breeders needs to be adjusted up. He’ll be looking for ways to accommodate and accomplish that with precision feeding.

Zuidhof and other researchers in this area are also finding that if the broiler breeder is fed better, the offspring do better, which could bring potential benefits down the line for broilers.

The precision feeding system may also hold some promise with layers, and he is starting some trials here too.

A paradigm shift
The precision feeding system is still in its infancy and no commercial units are currently available, but Zuidhof sees tremendous benefits for this paradigm shift in how chickens are fed.

He cites several benefits to the system from biological efficiency, reducing costs of production, reducing environmental impact, and welfare benefits. Acknowledging that these will be expensive units, Zuidhof expects primary breeders focused on male broiler breeders will be the place to start. He’s also had some interested hatching egg producers.

“As an industry, we used to have very consistent feed intake for broiler breeder production and the variation was all in the body weight of the birds. Now, we can produce a very consistent body weight with precision feeding and the variation is in the bird’s feed intake. That really highlights the focus from thinking about how much to feed, to what is the body weight going to be. With precision feeding, we do all that work ahead of time, program it into the system and you don’t have to think about it for the life of the flock,” says Zuidhof.