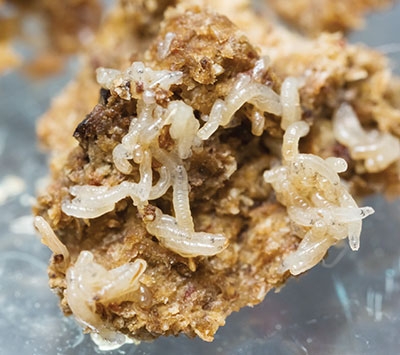 Vancouver-based Enterra Feed Corporation is not only unique to Canada; it is attempting to resolve two problems with a single solution by using food waste to create feed protein derived from insects.  They describe it as up-cycling.

By using a food source that is naturally eaten by poultry, Enterra is tackling two major, global problems – wasted food and a growing demand for affordable protein sources.

The sharp increase in pre-consumer food waste over the last 50 years is due in large part to increasing consumption of perishable fruits and vegetables and stricter food quality requirements. This is happening at the same time as fish stocks and crop lands are shrinking and as demand for soy and other plant proteins is growing, creating volatile feed supplies and prices for poultry farmers.

The farm and food sector is continuously seeking ways to make their practices more environmentally and economically sustainable.  This is where insect-feed fits in.

According to the company website, Enterra’s  patent-pending hatchery process uses a local beneficial insect to recover nutrients from traceable feedstock.  “We operate an organic, zero-waste system to provide a sustainable supply of high quality nutrients for food production at a stable price, and that also reduces food waste disposal costs for businesses and municipalities.”

This is the way it works.

Enterra takes fruit and vegetable waste from grocers and food processors — including Overwaitea Food Group and Sun Processing — combines it with a small amount of fish trim and waste bread and feeds it to the larvae of the black soldier fly. This common and benign fly is used because it is not a vector for disease and because the female flies are prolific- producing up to 900 larvae eggs during their seven day lifespan.

Known for their voracious appetite, the larvae consume each feeding in just a few hours, so the waste food never has time to decompose and breed pathogens.

The largely automated,  enclosed hatching facility can take in 100 tonnes of pre-consumer food waste per day or 36,500 tonnes per year.

This produces approximately 5,400 tonnes of larvae, 2,700 tonnes of fertilizer and can recover nearly 20,000 tonnes per year of clean water from the fruit and vegetable feedstock.

After two weeks when they are at their prime, the larvae are cleaned, cooked, dried and ground into meal. The meal is about 60 per cent protein, comparable to soy feed, and, according to the company, suitable for both fish or poultry feed. The larvae castings and spent brood flies are being used as fertilizer by local farmers.

The company calls it “Renewable Food for Animals and Plants™”.

Breeding trials conducted by the EU initiative PROteINSECT have found that one hectare of land could produce at least 150 tons of insect protein per year. By comparison, soy planted over the same area yielded just under a ton of protein and is more resource intensive to grow.  And a 2013 report by the   Food and Agriculture Organization of the UN  suggests that feeding trials with fish and poultry showed that the animals fed insect-feed outperformed those raised on traditional diets.

TRIAL PHASE
In September, Enterra announced that it had received additional investor funding to help complete its 56,000-square-foot commercial pilot facility in Langley B.C., expand production and begin selling feed on a commercial scale. This makes Enterra the only large scale commercial producer in Canada although there are many in the research, pilot and start-up stages here in Canada and globally.

Company CEO Brad Marchant says “we have been testing our products with poultry for about two years now — both in Canada and the U.S.  The most recent field testing is being conducted at the University of Saskatchewan as well as an organic poultry farm in Oregon, with very encouraging results and positive response from the farm operators.”

As the company prepares to ramp up commercial production, it has filed for Canadian Food Inspection Agency (CFIA) approval to sell its feed products in Canada and is awaiting organic certification for its fertilizer product in Canada.  Marchant reports that Enterra has “been working with CFIA for about two and half years now, to register the product as a novel feed ingredient for poultry and aquaculture.” Adding, “We understand that this is a normal timeline for approval of a novel feed ingredient.”

CURRENT AVAILABILITY
Currently, the products are being sold in Washington, Oregon and Idaho where the firm has received product approvals. The company is awaiting approval in several other U.S. states.  At the same time, Enterra is working on FDA registration so they can sell to all of the U.S. market rather than just certain states.

When it comes to price, Marchant says it is price competitive with common protein sources such as soy and fish meals. “Based on the nutritional content and digestibility we are priced between premium fish meal and poultry meal.  In some cases, where the advantages of local, consistent supply of a natural protein product are desired, there is a premium paid.”

The company is receiving inquiries from poultry producers and Marchant says, “there seems to be pent up demand for the product as insect larvae are a natural feed source for poultry, and our larvae are grown from traceable feedstock sources. It is really more a case of regulations catching up with product demand.”

If all goes according to plan the company may open hatcheries in Toronto, Seattle or San Francisco.

Although 1/3 of the world’s population eats insects as a regular food source it will be a challenge to get North Americans to adopt an insect diet.   The next best thing is to use those insects to feed animals we will readily eat. And that poultry will too.