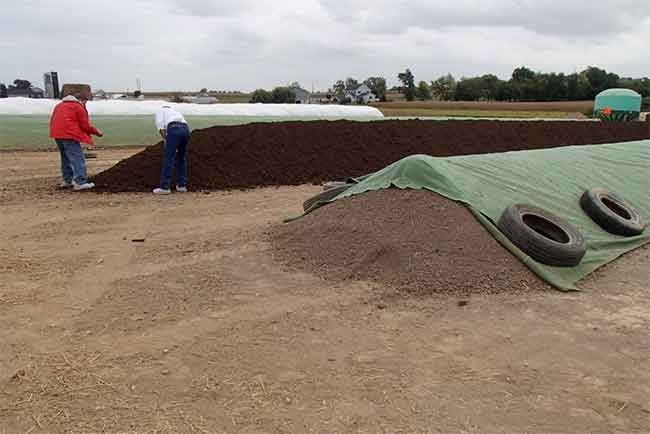 Two Symposium participants inspect a recently-turned compost windrow during a tour on Monday, Sept. 28, 2015. Compost windrows are turned to redistribute moisture and oxygen throughout the mixture in order to maintain a consistent temperature.

“We wanted our participants to think about creating systems that work effectively and quickly to manage mass animal mortality events,” said Dale Rozeboom, Ph.D., Michigan State University professor and extension specialist and Symposium Chair. “Gaps can exist in many areas – from depopulation, disposal and decontamination to administration of response, funding availability and communication between national, state and local government agencies.”

Keynote speaker Tim Goldsmith, DVM, MPH, DACVPM, University of Minnesota College of Veterinary Medicine assistant professor and co-director of the Veterinary Public Health and Preventative Medicine Residency Program, explained the
importance of understanding risk in planning for and responding to catastrophic animal disease and how meetings like the Symposium are crucial for providing the tools needed to manage risk.

“Risks associated with catastrophic animal disease go beyond the health of the animal – it affects people, communities, and industries,” Goldsmith said. “Zero risk is not possible and we shouldn’t strive for zero, but, we need to look at the risk management possibilities out there for activities with significant risk in order to lower those risks to an acceptable level for all stakeholders involved in the management of a disease event.”

Tim Rueter, Ph.D., Livestock Research Branch of Alberta Agriculture and Forestry, spoke about managing high-risk pathogens through composting. Another plenary speaker, Patrick Webb, DVM, director of swine health programs at the National Pork Board, explained lessons learned in the swine industry and its recent experience with an outbreak of Porcine Epidemic Diarrhea Virus. Webb described response strategies and methods used for managing mortality and morbidity during an emerging disease outbreak significantly impacting swine production and the effects of the disease on U.S. pork producers.

Attendees also visited the Southeast Agricultural Research and Extension Center in Landisville, Pennsylvania. Demonstrations were hosted by experts and showed emergency windrow composting, carcass reduction, portable vehicle wash systems, wastewater treatment systems and humane euthanasia methods for livestock and poultry. The demonstration of techniques and challenges of foam euthanasia of poultry was particularly relevant, as many of the participants have been actively involved in response to the recent Highly Pathogenic Avian Influenza (HPAI) outbreak in the U.S. flock.

“Immediately, I had planned to compost the birds,” Van Oort said. “We had dabbled in composting a bit before but not with 7.3 million birds – more like seven. We had to develop a cookbook and become resourceful . . . There were many lessons learned throughout this crisis and it’s certainly something that we hope to not have to deal with again.”

In order to understand the issues and to apply research opportunities and lessons learned from the 2015 HPAI outbreak response, the Symposium’s emergency exercise focused on response to a notional HPAI outbreak. Through breakout sessions and participating in facilitated scenario discussions, participants analyzed the notional outbreak on multiple levels (single farm, multiple farms, state, nationally and internationally) and identified issues and research opportunities related to depopulation, disposal, cleaning and decontamination and business continuity plans for the management of realistic issues that may occur during an outbreak.

Symposium planning committee members Edward Malek, Ontario Operational Specialist for Animal Health, Canadian Food Inspection Agency, and Duncan Worsfold, Statewide Specialist in Animal Emergency Preparedness, Agriculture Services and Biosecurity for the Department of Economic Development, Jobs, Transport & Resources of Echuca, Victoria, Australia, served as moderators for the exercise. The two envisioned that this emergency exercise would not only allow the participants to understand lessons learned, but also better prepare attendees to gather information and concepts for the development of collaborative discussions that may apply should an outbreak like this happen in their area in the future.

The Symposium’s focus extended beyond the U.S. borders through an international panel of experts who convened to discuss their perspectives and experiences on animal mortality management. This session included a plenary address from Heekwon Ahn, Ph.D., associate professor in the Department of Animal Biosystems Science at Chungnam National University in South Korea, who discussed his experiences and the response of the South Korean government during the 2011 South Korea Foot and Mouth Disease outbreak. The panel included representatives from: Vietnam, the Republic of Georgia, Australia, South Korea, Tunisia, the United Kingdom, Canada and Nigeria.

Though the Symposium has concluded, the group’s work continues. Over the next year, the planning committee will produce a white paper for the U.S. Department of Homeland Security (DHS) and continue to collaborate with participants in order to advance the preparedness of the industry for a mass animal mortality event.

The Symposium was hosted by Penn State Extension. To learn more about the Symposium, go to http://animalmortmgmt.org.