Forty years ago Canada was celebrating its 100th birthday and the whole country was abuzz with Expo ’67 in Montreal.
In 1967, Bill Fleming put everything on the line and started a modest feed mill. 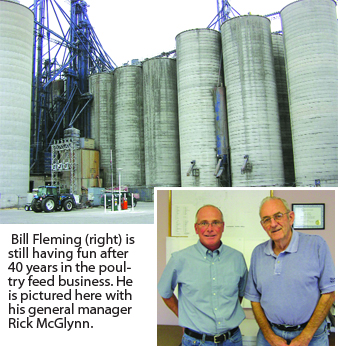 Forty years ago Canada was celebrating its 100th birthday and the whole country was abuzz with Expo ’67 in Montreal.

While Expo, and even the baseball team named after the event, are now pleasant memories, something was happening hundreds of kilometres away in Clinton, Ont. that has become bigger and better with each passing year.

In 1967, Bill Fleming put everything on the line and started a modest feed mill.

Now the feed mill is the dominant feature on the eastern side of the small town just east of Goderich and Lake Huron.
Fleming didn’t have grandiose ambitions when he started. He was managing an old feed mill in the centre of town that was sinking fast. Despite the problems with that company he thought the feed business still had potential.

“I had a pretty good feel for the industry,” he said.

After asking around he decided he could make a go of it by supplying feed to the area’s growing poultry industry.

Initially, he bought his grain locally from a corn industry that was spreading north utilizing newer varieties and importing soybeans from Toledo, Ohio. As the soybean belt moved north, his source of supply moved north and closer to home.
He survived and thrived during the early 1970s when farmers across North America were looking for “beans in the teens” or for soybean prices to jump to $13, $14 or $15 a bushel and corn prices to be pulled up as well.

His grain buying skills served him well back then and at the age of 77 he continues to utilize that knack for buying grain at the feed mill.

At first, Fleming Feed Mill was selling 20 to 30 tonnes of feed a week. Now it sells 2,500 tonnes a week. The company has two lines producing poultry feed that turn out 30 tonnes an hour.

At first, the company’s market was local and Fleming wore virtually all the hats including salesman. Now the company
has a staff of 25 and three full-time salesmen who cover virtually all of Southwestern Ontario.

The market now stretches east to Guelph, southeast to Port Colborne in Niagara Region and south to Lake Erie.

To work in the growing market the facility also had to grow. Over the years a series of large elevators to store grain were added to the feed mill and the facility can now store 40,000 tonnes.

Being focused on the poultry industry allows the company to service a very large area McGlynn said.

If the company was selling to the hog industry the service area would be much smaller because the volumes aren’t there.

On the broiler side it sells to producers who deliver to independent abattoirs and processors.

“Our sales reps work closely with the independent processors,” he said. The industry is extremely competitive and the mill fights for every producer it can get.

To do this, the company hits and exceeds the highest standards. It has been HACCP certified for years and now uses even higher standards set by Feed Assure.

“Quality control is everything,” McGlynn said.

The company contracts with an independent nutritional control expert and all the ingredients are thoroughly tested, he said.

McGlynn said the DDG is thoroughly tested and the company is constantly taking samples, which are assayed to determine the properties of the product.

While concerns have been expressed about DDG consistency in the U.S., McGlynn said the situation in Ontario is different because only two ethanol plants are up and running compared to hundreds in the U.S.

The result is a DDG consistency in Ontario that is lacking in U.S. product.

“We are receiving a very consistent product,” he said. McGlynn said Fleming Feed Mill works closely with the ethanol plant to ensure there is a good relationship.

The company also limits the DDG component to a maximum of five per cent in its feed.

Fleming said a lot has changed in the last 40 years. The poultry industry has grown and the old smaller feed mills
have closed.

But a lot hasn’t changed. Quality product and working with farmers was important 40 years ago and they are still the keys to success today.

Another key is enjoying what you do.

Before he headed back to his office to do some more grain buying, Fleming said the grain business is pretty exciting these days. Prices are bouncing. “We’re going to see some wild prices,” he said.