Houseflies can be a dangerous insect to bird health; fly management is essential

Houseflies can be a dangerous insect to bird health; fly management is essential for protecting against disease

Avian influenza (AI) is currently of major concern since the disease caused the death of countless wild birds and hundreds of millions of chicken. It has a huge impact on the economic situation of poultry farmers and can even threaten their health. Recently, in the EU a budget of 1.9 billion euros has been allocated for the prevention of the disease.

Houseflies can produce huge economic and sanitary problems, especially in modern farm animal business. As an example, the annual damage in Georgia (3.3 million cattle and 27 million poultry) caused by houseflies alone was calculated to be around 2.4 million USD per year.1 The major damage in livestock is caused by the transmission of various diseases. Among them as one of the most threatening diseases not only for the animals but also for human beings is avian influenza (AI).2 Other diseases transmitted by flies are tuberculosis,3 coccidosis,4 cholera,5  helminthiasis,6 PRRS,7 and approximately 100 further diseases.8

Therefore, the housefly Musca domestica is definitively one of the most
dangerous insects. Millions of humans and countless animals are suffering and even dying from diseases transmitted by flies. They continuously fly between clean, hygienic domains in houses and farms and critical areas such as feces, waste, and carcasses. This is the way flies become mechanical vectors for several infectious bacterial, fungal,protozoal and viral diseases.

Fly control programs can reduce the risk of infection. Treatment schedules are available in the fly brochures of Novartis Animal Health, as well as recommendations for fly monitoring and other measures to improve efficacy of such programs.

OUTBREAKS OF AVIAN INFLUENZA
The strain (H5N1) currently spreading from Asia to Europe is not only highly pathogenic for poultry, but has the potential to infect humans, and a number of fatal cases linked to backyard poultry have been reported.

The virus was first identified in 1996 in China. Since then millions of birds and 109 people (World Health Organization (WHO)) have died. Independent from this serious H5N1 epidemic, several outbreaks of AI occurred in the past. Between 1959 and 2001, a total of 18 primary outbreaks of highly pathogenic AI in poultry were recorded. Millions of birds were killed each time to stop the spread of this virus, always resulting in immense economic losses for the farmers and national economy.

For example, 30 million birds were killed to stop the spread of this virus (virus isolate H7N7) in the Netherlands in 2003. In Italy 14 million chicken were killed in 2000 (H7N1) and in the mid-90s the avian influenza A subtype H9N2 raged in many countries all over the world such as the United States, Germany, South Africa, Iran and Korea.

FLIES AND AVIAN INFLUENZA
In the scientific literature the connection between the AI virus and houseflies as transmitter is reported several times:

• Houseflies seem to be one of the predominant vectors that can transmit AI in poultry farms. An outbreak of AI (H5N2) in Lancaster County, Pennsylvania, USA, in 1983-84 lead to the death of countless birds. Up to 90 per cent of the flocks died. Transmission of the AI virus was suspected to occur in several ways. Apart from the direct contact between the birds and contaminated mechanical vectors such as man, one of the major transmission routes seemed to be insects, especially houseflies. Fifteen different species, mainly flies and beetles, were collected in 324 pools (each with 10-60 insects of one species). Among them were 72 pools only with Musca domestica as the dominant insect and 49 with two other fly species samples.2

• Flies (121 samples of three species): In more than one third of the adult Musca samples, the virus of avian influenza could be identified. Also 1/3 of samples of less abundant fly species (Ophyra and Coproica) were positive.

• Beetles and other insects: In the remaining 203 species specific samples, only two further insect samples (one of litter beetle Alphitobius diaperinus and one of hide beetle Dermestes maculates) were positive. No one of the other species sample was AI virus positive.

• An H5N1 bird flu strain was found in blow flies caught in 2004 near a poultry farm in Kyoto in western Japan that had seen an outbreak of the virus in the previous months.9

• The AI virus was isolated from houseflies in chicken houses.10

These results show the potential of flies in general and Musca domestica in particular to carry avian influenza viruses!


An integrated farm fly control should always be an important tool to reduce the threat of AI in poultry farms and to avoid the economic disaster caused by such outbreaks. It is part of the general recommendations to prevent the spread and introduction of AI virus. Based on the three key principles of biosecurity: isolation, traffic control and sanitation, a series of recommendations can be made to prevent the spread of AI between poultry premises by flies:

ISOLATION
The mechanical transmission of AI has to be avoided. Be aware that flies can easily fly distances of several kilometres.

TRAFFIC CONTROL
The spread of AI often follows the movement of people and equipment. Flies can be present in feed trucks, during transport of poultry from the hatchery or to the slaughterhouse and on and in cars of visitors. In this way, flies can be easily transported from one farm to the other.

SANITATION
The removal of manure destroys the breeding sites of the flies.

POPULATION AN 'ICEBERG'
The fly population is like an iceberg. The visible part, the adult flies, are the top representing approximately 20 per cent of the total population. They are causing the problems. But the bigger part, 80 per cent of the population (eggs, larvae, pupae) is hidden in the manure, dung, spoiled fodder and other suitable places for development of the larvae. This continuously supplies new flies.

The treatment of the adult flies alone addresses only a small part of the problem and can’t solve it satisfactorily. It is essential to start the fight by using larvicides in conjunction with an adulticide treatment scheme. 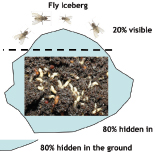 USE OF LARVICIDES AND ADULTICIDES
Larvicides target the hidden majority of the fly population. They usually interfere with the hormone system of the insect larvae (e.g., methoprene), with the chitin synthesis (e.g., lufenuron) or interfere with the moulting process (cyromazine). This ensures the selectivity of the larvicides. Compounds like cyromazine (e.g., Neporex®) are even more selective since they kill only the larvae of flies. Beneficial insects like parasitic wasps or beetles –  but also mites feeding on eggs, larvae and pupae of flies – are not affected. These modes of action lead not to an immediate death of the larvae but kill the larvae at the moulting stages or when they develop into adults at the pupal stage. Larvicides have no direct effect on adult flies and are thus summarized as “Insect Growth Regulators” or IGRs.

*Editor's note: Please note that the products mentioned above are not registered in Canada; these are products currently used and available in Europe.  Please consult with your local dealer/supplier for assistance with determining a larvicide or similar product that is registered for use in Canada.*

Larvicides are applied to the breeding sites of the fly larvae either in granular form, as a spray or poured on the manure. Spillage areas under feeding troughs, moist areas beneath drinking troughs, around pillars and posts are the most critical areas as well as edges and anywhere else manure accumulates.

Adulticides are used  to control the adult flies. The majority of the insecticides in current use against flies act on molecular targets in the insect nervous system. There are several well-established compounds out of different chemical classes (e.g., carbamates, pyrethroids, neo-nicotinoids, spinosyns). The main targets are nicotinic acetylcholine receptors, GABA receptors, glutamate receptors, cholinesterases and sodium channels.

The adulticides are available in different forms:

• As sugar containing baits mixed with an insecticide, sugar and some further attractive substance such as the fly pheromone tricosene and a yellow or red dye. The products are designed as ready-to-use, “attract-and-kill” granular baits. The flies are attracted by colour and tricosene, consume the sugar and thus the insecticide. The products mainly act as stomach poison.

• Due to the sugar matrix the baits can also be dissolved in water to be painted on pillars, posts, window frames, milk pipes or as spots on the walls where flies normally tend to gather.

• Very popular is the use of surface sprays which provide a long-lasting toxic surface. They are applied where the flies prefer to rest (e.g., on walls, posts and ceilings). The products act as contact poison.

RESISTANCES
The great potential of flies to develop resistances always has to be considered by using chemical means.

The alternating use of insecticides from different insecticidal classes with different mode of action (e.g., pyrethroids and spinosyns) in a monthly manner is highly recommended. This rotation management prevents the development of resistances (Table 1).

Additionally the parallel use of adulticides and larvicides is of great importance. Since the molecular targets of IGRs (larvicides) are always different from those of adulticides it also helps to prevent the development of resistances.