Food safety’s a tale for the phages

Century-old technology may be the solution to modern resistance issues. 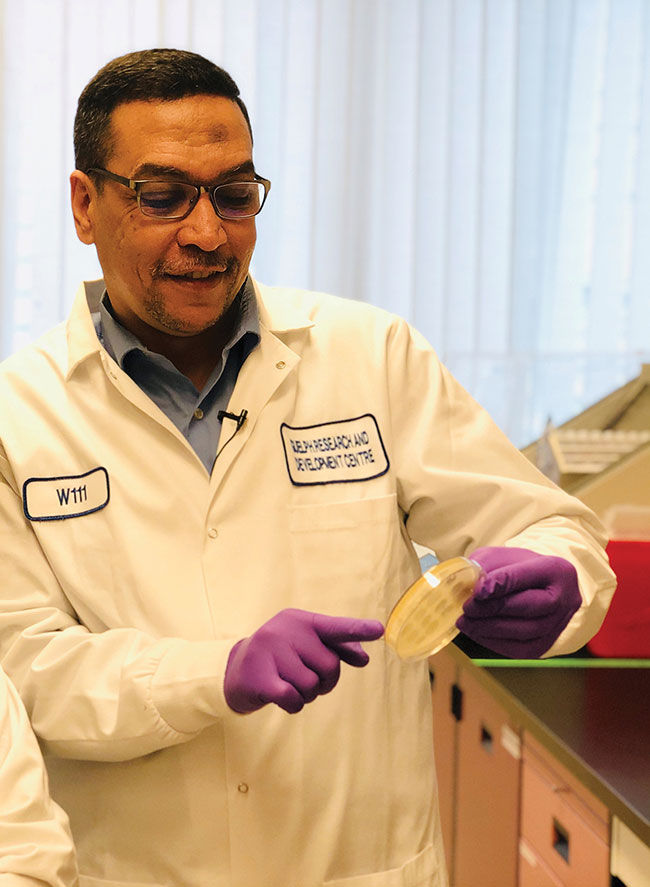 In the modern fight against antimicrobial resistance, one Canadian researcher is working with a promising new technology from an unlikely era: the past.

“Phages are an old antibacterial tool that are coming back as a new tool,” says Anany. “This green technology presents a novel antimicrobial option during processing and at other points across the food supply chain to enhance food safety.”

“Now that the industry faces development of antimicrobial resistance and tolerance to sanitizers, we need a different solution,” Anany says. “The use of phage-based products on foods is accepted and approved by several health agencies around the world, including the United States and Canada.”

Anany’s most recent work focuses on finding ways to incorporate phages during poultry carcass processing to control Salmonella and Campylobacter contamination. He sees potential in adding phages to the absorbent pads found under raw poultry products, to allow phages to target or “eat” specific pathogens at their source.

Where there’s bacteria, there’s a phage
Both phages and bacteria are living organisms that have coexisted for billions of years. Anany’s early work focused on finding phages that can specifically infect foodborne poultry pathogens, and isolating them from their natural environment. Since Salmonella and Campylobacter commonly begin in the gut, he collected fecal samples from farms to “hunt” for phages against Salmonella and Campylobacter strains associated with previous foodborne outbreaks and illness.

“Phages and their pathogens coexist, so it’s very important to hunt for the phages in the environment where we expect to find the pathogen,” says Anany.

Once he isolated dozens of phages, he used genome sequencing to examine each phage for specific traits. Anany was looking for phages that offered a broad host range, low development of resistance, good stability, and an ability to kill bacteria in a short amount of time.

After isolating phages with the bacteria-fighting traits he was searching for, Anany combined selected phages to create a phage cocktail that would bind to different bacterial surface components to minimize the chance of resistance development. He tested the mixture in different concentrations on raw chicken and turkey skin that was inoculated with Salmonella, and found that over three days at various temperatures, the phage cocktail reduced bacteria counts without developing any phage-resistant mutants.

“The more we increased the phage count, the more we saw complete inhibition of the bacteria,” says Anany.

He notes that while the team had good success developing a phage cocktail for  Salmonella, they have faced delays in developing a similar mixture for  Campylobacter  due to the COVID-19 pandemic. He expects to use the same method to develop a viable cocktail against that pathogen in the coming months. 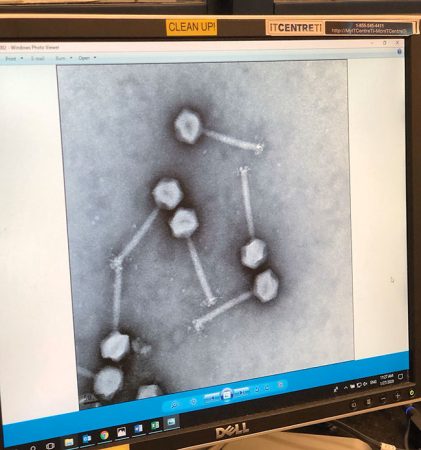 Bacteriophages or “phages” are naturally occurring, highly specific viruses that can be used as a novel antimicrobial option. PHOTO: Agriculture and Agri-Food Canada

Commercial use
While phages are not currently used in poultry production in Canada, Anany sees potential to use them as a processing aide once his phage cocktails are produced on a larger scale. First, his team is finding ways to incorporate phages where they will not be deactivated when exposed to sanitation practices such as chemical disinfectants normally used in poultry processing environment.

“Phages are living organisms that would be destroyed by chemical and physical antimicrobial agents, so it’s important to understand at what point in the process we would use them and how we apply them,” says Anany.

The estimated cost of phage applications for poultry is one to four cents per pound, compared with 10 to 30 cents per pound for high pressure processing (HPP). Anany suggest that although it’s unlikely phages alone would replace the currently used antimicrobial technologies, it is envisioned to be used as part of a hurdle technology along with other antimicrobial approaches to enhance safety throughout the poultry supply chain.

“Phages have minimal effects on quality and sensory properties of food. We think if we wash the carcass with the phage before and after chilling step during processing, and also add it to the package, it might enhance the safety of raw poultry products over its shelf life,” says Anany. “Even if bacteria survive the treatment, I expect it will not be as virulent or pathogenic as it was clearly demonstrated in many cases that development of phage resistance has a negative impact on virulence fitness of several bacteria.”

Next steps
Anany is adding his phage cocktail to the absorbent pad underneath raw product to allow for phages to be released over the shelf life of the product. Eventually he plans to produce the pads on a larger scale to test them in an industrial setting, combining phage cocktails to allow for control of both Salmonella  and Campylobacter.

“Antimicrobial resistance is a serious issue, and phages are an opportunity to use a natural technology that has no impact on the environment or humans,” says Anany. “There is potential to incorporate phage technology at all stages of the poultry supply chain to reduce contamination and growth of these two bacterial pathogens in poultry meat.”

Anany’s research is funded by the Canadian Poultry Research Council as part of the Poultry Science Cluster which is supported by Agriculture and Agri-Food Canada as part of the Canadian Agricultural Partnership, a federal-provincial-territorial initiative. Additional in-kind contributions have been provided by Maple Leaf Foods and Exceldor Foods.