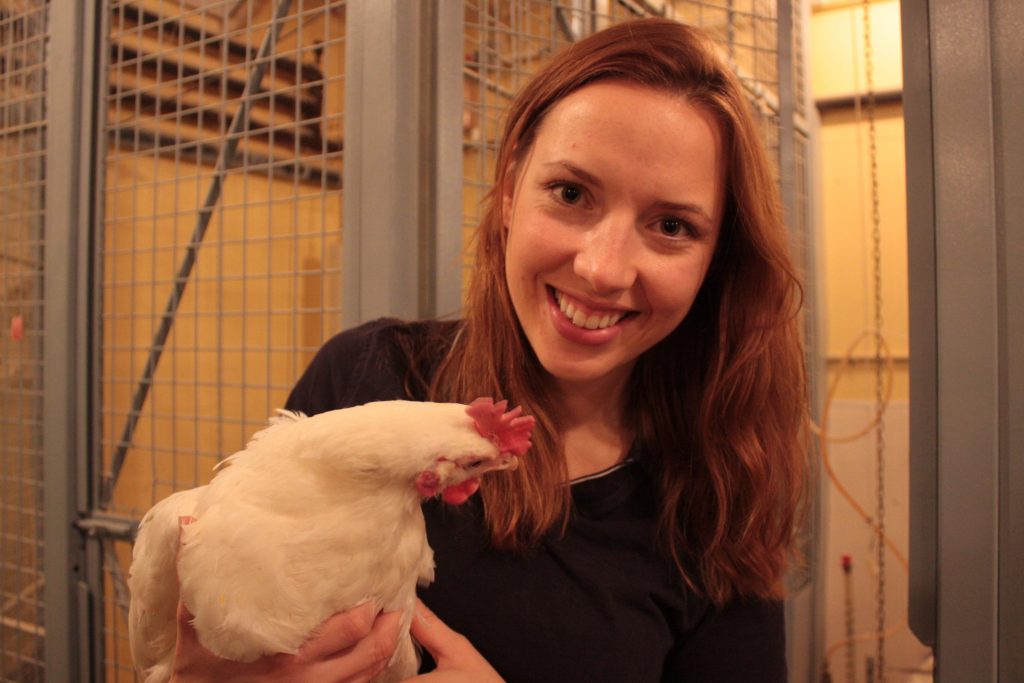 Dr. Krysta Morrissey, a postdoctoral researcher with the department of animal biosciences at the University of Guelph.

Feather pecking is not an act of aggression but repetitive pecking that is thought to be a result of stress, according to Dr. Krysta Morrissey, a postdoctoral researcher with the department of animal biosciences at the University of Guelph. “It can cause pain and injury and is an animal welfare concern.”

In Morrissey’s first doctoral study, she investigated how various items might deter injurious pecking among hens housed in enriched 80-hen cages. She placed two pecking mats, eight hanging ropes and two blunting boards, which are used to dull the beak, in each cage.

While the presence of extra enrichments did decrease injurious pecking behaviour, the overall feather damage of these birds were not different from the control group, and number of deaths was similar. Morrissey posited that because the ropes had cauterized ends, that made it difficult for the hens to pull them apart and so they might have ignored the ropes after initially investigating them. She also thinks the that the number of enrichments per hen may not have been sufficient.

In the second study, she again added enrichments but at a higher ratio and in alternate designs. The rope ends were left un-cauterized, and blunting boards were placed in the feed troughs where hens would come in contact with the boards during feeding. Morrissey also supplemented the hens’ diets with oat hulls in order to increase the time spent feeding. She hypothesized that the longer the hens spent feeding, the less time they would participate in injurious pecking. And indeed, these hens had less feather damage compared to hens in the control conditions.

In a later study conducted last year, Morrissey housed hens individually with blunting boards or cuttlebones, which are used by exotic birds such as parrots to dull their beaks. There was a numerical reduction in beak length for the hens housed with cuttlebones, though the differences did not reach statistical significance.

Most of the hens readily used the cuttlebone and Morrissey believes that finding a substrate that attracts hens while dulling the beak tip may prove to be beneficial, though more research is still needed.

“The enrichments I used in my projects showed some encouraging potential to significantly reduce injurious pecking as well as feather damage,” she says. “However, these may not be the only type of effective enrichments. Including objects that increase exploratory pecking and foraging-like behaviours are beneficial, and I would encourage producers to try a range of different objects and replace them as necessary.”

She notes that hens might quickly lose interest in certain enrichments, whereas others may maintain interest over longer periods of time and may differ from flock-to-flock.

Beyond enrichments
Beak trimming has been pointed to as a solution for feather pecking, but Morrissey notes that it does not address the underlying cause of injurious pecking, which is frustration and stress because no suitable substrates are available for the expression of natural foraging behaviour. The updated layer code of practice does not ban beak trimming.

For its part, reducing light intensity has been found to be effective at reducing injurious pecking. While Morrissey says it is a go-to management strategy when pecking outbreaks occur, again, it does not solve the underlying cause of frustration and stress.

As to whether, based on her own research and that of others, she would recommend the enriched cages currently on the market over free-run barn housing systems in terms of reducing feather pecking, Morrissey notes, “In general, injurious pecking is easier to manage in smaller groups in enriched cages, but prevalence of injurious pecking is associated with a wide range of risk factors, not just housing type, and therefore can be managed in free-run barns under certain circumstances.”

It is anyone’s guess whether most of the layer hen housing in Canada will be free-run barn in the coming decades. That’s what Loblaws, McDonald’s and other major companies have committed to sourcing, even though some research has found that injurious feather pecking and things like air quality may be much worse in free-run housing than in enriched cages.

Morrissey says, “I think the answer is more research. We should aim to improve on-farm behaviour and welfare regardless of the housing system used. I think all systems have room to improve and we should work toward a sustainable solution that is best for the hens, consumers, retailers as well as industry groups.”

Breeding is another possible strategy for reduced feather pecking. Researchers have found both major genes for feather pecking and specific markers for severe feather pecking behaviour on several chromosomes. Morrissey says she believes the genetics companies are already trying to incorporate behaviour into their breeding models.

For older housing systems, the code’s Transitional Requirements state that previously built enriched cages must have at least 24.8 cm2 per 25 birds of a flooring surface for foraging. For single-tier barn/free-run systems that are fully slatted, or where less than 15 per cent of useable space is litter, a solid surface area of at least 1.5 m2 for litter or substrate for dust bathing must be provided for each 1,000 hens and at least one foraging site for each 1,500 hens. In multi-tier systems, at least 33 per cent of the usable space must be litter, except up to 24 weeks of age it may be reduced to a minimum of 15 per cent.