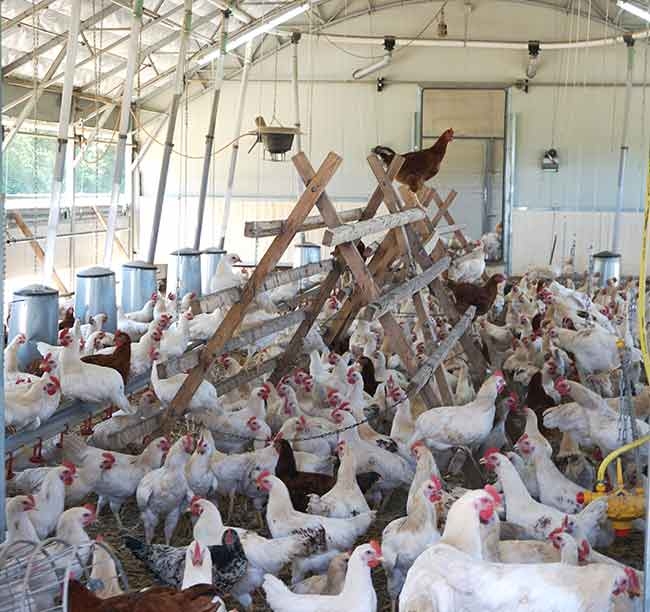 Some farmers in Germany have built an alternative market for male chicks known as the Bruderhahn Initiative. One farmer, Christine Bremer, uses mobile broiler barns to raise the males.

What to do with the males of a species when the females are all that are needed is an issue various agricultural sectors grapple with.

In poultry, the question of what happens to male chicks when only females lay eggs continues to beg a satisfactory answer. Although cull is the current widespread solution, research is underway into alternatives, such as work by Dr. Michael Ngadi at McGill University (see page 24 this issue)   Egg sexing research is also underway in Germany, supported by a national animal welfare initiative that aims to ultimately phase out culling of male chicks altogether. In the German state of Lower Saxony, a trailblazer in animal welfare regulation in that country, the practice is slated to be banned by the end of 2017.

Some farmers in Germany have built an alternative market for their male chicks, under the banner of the “Bruderhahn Initiative” – which literally translates into English as “the brother rooster initiative”.

The concept, explained Christine Bremer of Bauck-Hof Klein Suestedt, located in the Lunenburg Heath about 100 kilometres south of the city of Hamburg, involves raising the male chicks 18 to 22 weeks of age and selling them for meat the way broilers are.

Because their genetics are focused on egg and not meat production, raising the males for consumption is an expensive venture. “The males are very active and we need 5.5 kilograms of feed for one kilogram of gain, which is not a good conversion,” Bremer told international agricultural journalists touring her farm this past summer, adding this means her farm needs a subsidy of 7.50 to 10 Euros per “brother” to make the economics work.

Unlike most farms, though, Bauck-Hof Klein Suestedt was able to get that money from the market place – but through egg sales instead of a premium on the meat, which is dark and has a taste similar to pheasant.

Every egg sold from Bremer’s hens sells for four cents more than other eggs, and those funds, collected through the “Bruderhahn Initiative”, go back to the participating farmers to pay for the costs of raising and marketing the males for meat.

“If a hen lays 250 eggs and we get four cents more per egg, we can pay for the “brother”,” she said. “Our trader who buys our eggs communicated this to the organic shops where our eggs are sold. In 2013, all eggs were increased by four cents and a label was added to explain why – and we had no loss of customers.”

Unsure of whether consumers would be interested in the darker, more flavourful meat, Bremer’s first customer was actually a baby food processor.  “We weren’t sure people would buy this meat but gradually people start asking for it,” she said, adding that due to her farm’s rural location and resulting unreliable internet infrastructure, their marketing is done at point of sale as opposed to through social media.

“As farmers, we need the help of traders and retailers to sell our products, and if our trader had said no, we couldn’t have done this,” Bremer said. “What customers are paying for is to not kill the bird at birth and that this animal is worth keeping alive longer.”

The male layer for meat program is part of Bauck-Hof Klein Suestedt’s overall approach to agriculture. The operation is the second oldest organic farm in Germany, having farmed in this manner since 1932. More specifically, it’s one of Germany’s 2,000 certified Demeter farms.

Demeter is the brand for products stemming from biodynamic agriculture and is well recognized by German consumers, which Bremer says has been helpful in supporting the marketing efforts around meat from the male layers.

Bremer installed her first mobile poultry housing 13 years ago, and now has six mobile layer barns and four mobile broiler barns on her farm that are regularly moved to new locations on the fields and permit birds to roam and express natural behaviours.

“We use genetics that grow slower and the birds can choose whether they want to be inside or out,” she says, adding that farmers who build mobile poultry housing can have 40 per cent of their costs covered by the European Union.

Under the leadership of state Minister of Agriculture Christian Meyer, Lower Saxony has doubled state support for organic production from 137 Euros per hectare in 2013 to 273 Euros by the end of 2016. Subsidies for converting conventional farms into organic production have also increased, from 262 Euros to 403 Euros per hectare during that same time.

Meyer, who represents the Green Party, is a proponent of organic agriculture and has also introduced some of the strictest animal welfare regulations in the country since he took office in 2013, including banning beak trimming of laying hens by the end of 2016, and phasing out caged egg production completely by 2025.

“The supermarkets dictate and they are very strong. For example, although Lower Saxony is ending beak trimming, we can’t stop imports unless the retailers are supportive,” Meyer said, adding that retailers are supporting cage-free egg production by not selling eggs from hens in cages in countries like Poland and the Ukraine.

The state has also committed to reducing antibiotic use in agriculture by 50 per cent in five years, resulting in farmers having to notify the government each time they purchase antibiotics for livestock use.

Lower Saxony is one of Germany’s livestock powerhouses, home to 18 million laying hens that produce about half of the country’s eggs.