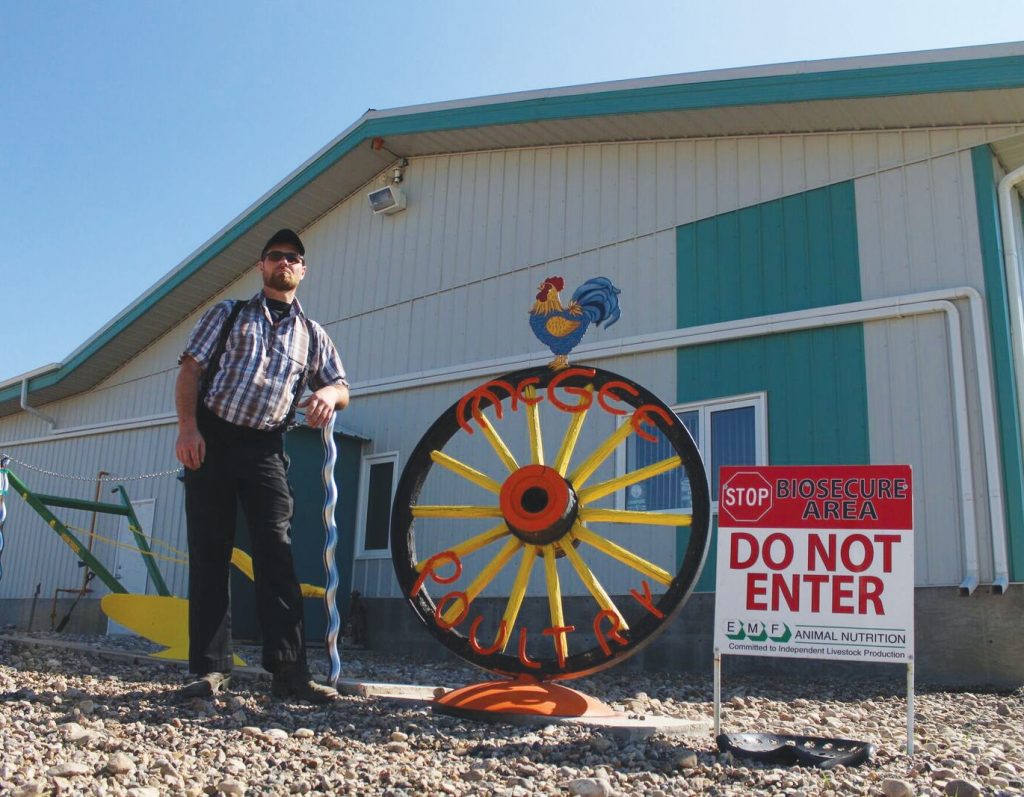 Jerry Mandel (above) and his father John have been successful with integrating crop and poultry units.

In 2014, Canadian farmers produced more than 595 million dozen eggs per year and had eight straight years of sales growth. According to a recent study by Egg Farmers of Canada, it takes 69 per cent less water and half the amount of feed today to produce a dozen eggs, while hens are producing nearly 50 per cent more and are living longer than they did 50 years ago.

Layer operations across the U.S. and Canada are progressing, and this fact is evident when visiting the layer operation at McGee Colony, recognized by Star Egg Company in 2015 with a first place finish in Saskatchewan for reaching the dozen eggs per bird and cost per dozen eggs quota.

As of 2014, Agriculture and Agri-Food Canada (AAFC) listed the average Canadian flock size at 20,192 hens; however, Canadian egg farms can range from a few hundred to more than 400,000 hens. The average laying hen produces approximately 305 eggs per year (25.4 dozen). The Bovan standard is 353 eggs per hen housed at 78 weeks.

The flock of 16,200 Bovan White managed by Jerry Mandel and his father John Mandel boasted a production of 370 eggs per hen housed, with 106 grams of feed intake per hen per day at 78 weeks, in 2015. The number of eggs produced was above the Bovan standard, while the feed intake per hen per day was below the Bovan standard. Jerry and John emphasize that they had great help in earning the plaque from Star Egg Company that was presented to them at the Saskatchewan Egg Producers annual meeting.

“Part of making this program work is good teamwork, with everyone making sure the hens get the best nutrition, health and management care,” said Jerry.

McGee Colony, located near Rosetown, Saskatchewan, is named after the site of the old village of McGee. The poultry barn and associated equipment are fairly new and well-maintained. Even so, there are challenges that need to be met.

The flock is an integral part of the colony. The feed is produced on-farm in a computerized mill, and the grains are grown specifically for use by the flock. Being located in the Rosetown area means wheat is the cereal of choice, not corn. By milling their wheat, McGee Colony was able to change to a larger screen (a 1-inch screen) with several advantages:

McGee’s rations do not contain meat meal, so their nutritionist at EMF Nutrition pays close attention to the osmotic balance of the ration, which also helps to reduce the fecal moisture. The inclusion of a yucca plant extract technology helps to reduce ammonia in the barn while also lowering the amount of ventilation required in the winter to remove ammonia, thus allowing for ease of maintaining daytime temperatures at 20 degrees Celsius and nighttime temperatures at 22 degrees Celsius in the winter.

The manure, which is removed to the storage room at the end of the barn, has heated air from the barn drawn over it as it is exhausted from the barn. This also helps to further dry the manure. The dry manure is then removed from the storage area and allowed to cure before it is applied as fertilizer on the fields.  From this process, less nitrogen escapes from dry manure. The less the nitrogen escapes from the manure and the better bound the nitrogen is, the higher the nitrogen content is in the manure that is applied to the fields.

McGee Colony also includes an enzyme technology in their rations to increase the digestibility of plant-based ingredients, thus reducing the need for supplemental phosphorus and decreasing the phosphorus levels in the manure. By lowering manure phosphorus and increasing nitrogen, McGee Colony can minimize the land required to accept the phosphorus while maximizing the amount of nitrogen applied from the manure. This nutrient management plan helps to reduce the nitrogen fertilizer required to meet the needs for next year’s crop.

McGee Colony has also implemented some of the programs other successful layer operations have shared within the industry. Dave Coburn of Coburn Farms spoke about its “Best Flock Ever” (Canadian Poultry, April 2012), and mentioned including the Alltech Poultry Pak® program in addition to the use of large particle sizes to stimulate the gizzard. Both of these methods were implemented in the Coburn Farms program to improve gut health and ultimately egg production.   McGee Colony has also incorporated both of these programs to maximize their eggs per quota and feed efficiency. With these programs in place, in addition to improving soil management and yield with effective soil nutrient management, McGee Colony is successfully building a sustainable agricultural program.

“The eggshells are better, even with the older 70 week birds, and we have less eggshell cracks than before,” said Jerry. “The birds are keeping their feathers longer and they always appear to be active.”