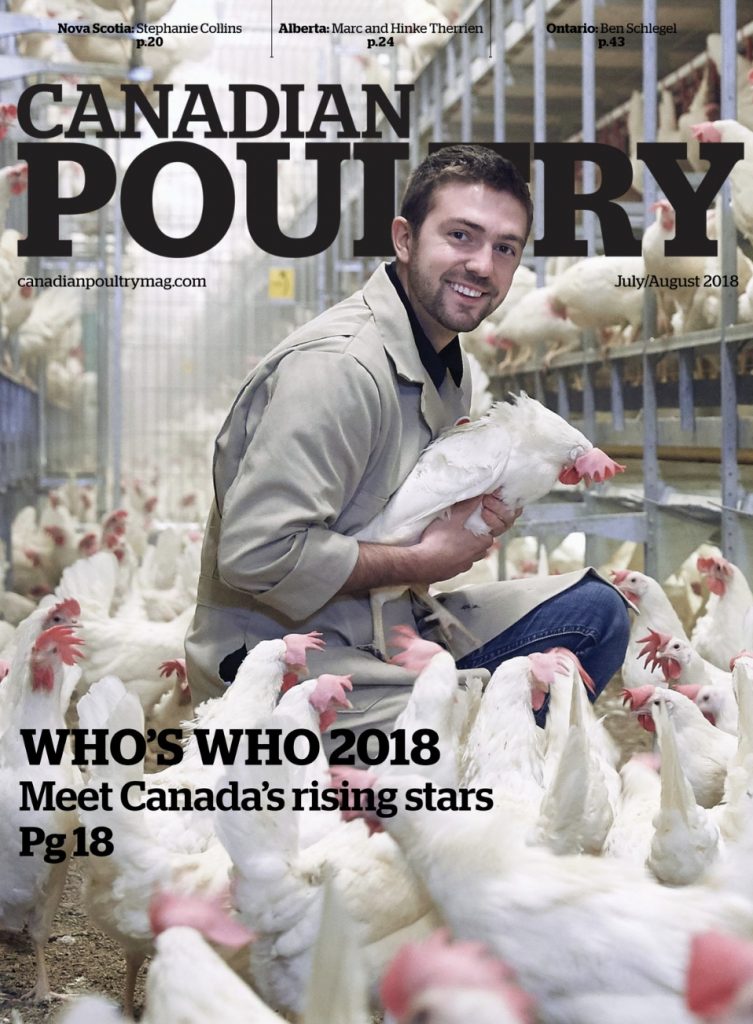 It’s that time of year again where we celebrate industry leaders from across the country. Indeed, our annual Who’s Who issue is back. This time we’ve added a few new twists. For one, we gave the issue a theme. Our first premise is “Rising Poultry Stars” and each year after we’ll be giving the issue a different focus.

Also, for the first time we requested that you the reader tell us whom you’d like to see profiled. You definitely delivered. We were thrilled to receive nominations from coast to coast for nominees that spanned all aspects of poultry. From geneticists to nutritionists to producers to engineers, this year’s line up covers a broad range of fields. We were so impressed with the calibre of nominees that we’ll be showcasing more profiles in issues throughout the calendar year.

On the egg side, there was a common thread running through the discussions I had with young producers. They all credited Egg Farmers of Canada (EFC) for its guidance. In particular, they raved about the national young farmer program.

Every year each provincial board selects a promising young egg farmer to participate in the program. Then over 12 months the upstarts attend four events across the country, where they network with other young producers and complete a series of 12 training modules. Thus far about 50 farmers have gone through the program, which is in its fifth year.

I talked to several past participants while working on  this issue and they all said the opportunity was invaluable. “It was a really good experience,” says David Lefebvre, a producer and engineer from Quebec. “We had the opportunity to meet all these people from the Maritimes to the west coast.”

Nova Scotia producer Blake Jennings, whose profile will run in a future issue, concurs. “Everybody farms a little differently,” says Jennings, who hosted some fellow participants at his wind-powered farm. “There are so many different aspects you could learn just from talking to people across the country.”

It all began in 2012, EFC was planning to celebrate 40 years of the supply managementsystem in Canada. In trying to reach some of the people involved with establishing it, the organization found that many had either passed away or were unavailable. “We realized we were at risk of losing part of our history,” CEO Tim Lambert says. “Because it’s been so successful in Canada we thought it was a really important opportunity to share our story with the next generation.”

That’s when Lambert first proposed a young farmer program. The idea later evolved into a more comprehensive offering aimed at empowering young farmers to be leaders both on the barn and in their communities. Participants learn about issues like the industry’s background, supply managemenand international trade. They’re also taught skills such as leadership, communications and government lobbying – abilities they put to the test at EFC’s annual breakfast on Parliament Hill.

Jennings’ father Glen notes the biggest payoff for his son was the communications aspect. Namely, learning how to speak with confidence. “Where I’ve seen that blossom is he’s come home and gone to Sobeys on the cropping side and doubled our sales of pumpkins and squash just from the skill level he’s learned from that program,” he observes.

For Lambert, seeing program participants fills him with optimism. “The future of our industry is in good hands,” he says. Now, other poultry and livestock sectors have inquired about adopting the program for their industries. What’s more, EFC helped the International Egg Commission start a young farmer program globally. “When I look back now it seems like such an obvious thing to have done,” Lambert says of the program’s success.