From the Editor: Keep educating by going virtual 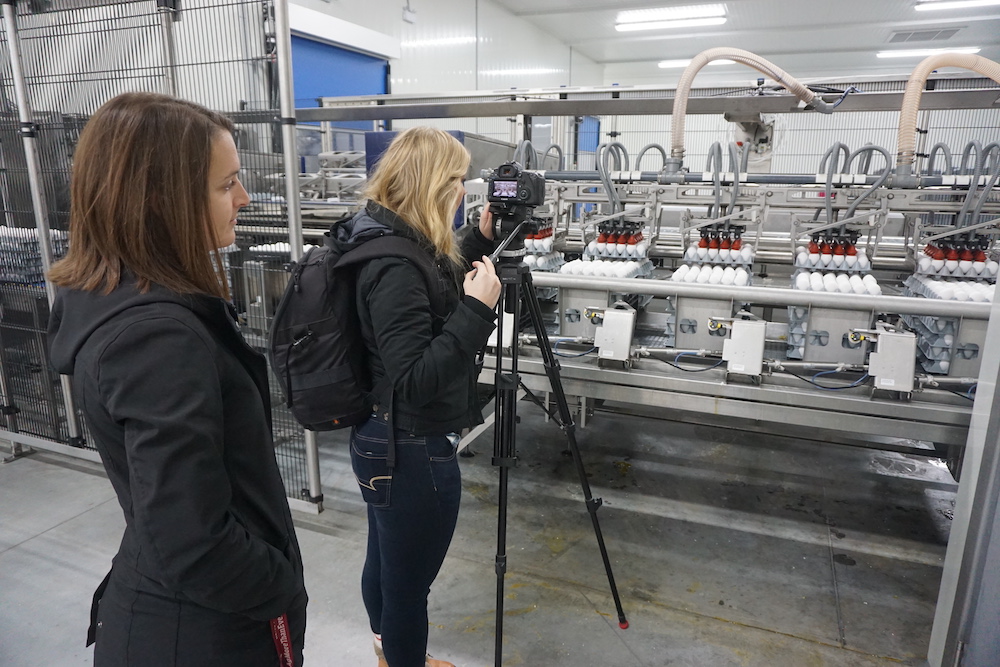 Farm & Food Care Ontario hosts many virtual tours, including this one at a Gray Ridge Eggs processing plant in Listowel, Ont.

As we slowly move beyond COVID-19 restrictions, one thing some people in agriculture have been  eager to restart is hosting and attending barn tours. They can be invaluable tools for educating both students and decision-makers. This, in turn, can help shape public opinion and influence government policies.

But the current avian influenza outbreak has delayed those plans for the foreseeable future – at least in poultry. Still, there’s a trend that ramped up during the pandemic that could expand the reach of these events tenfold without the biosecurity hassles – virtual field trips.

I spoke with two poultry producers, as well as an industry executive, who’ve become so adept at hosting these events that they have them down to an art. Here, they share their best practices in case other producers want to digitally showcase their barns in the name of industry advocacy.

It could be something producers organize themselves or a collaboration with an industry organization.

The first question would-be hosts need to answer is whether to make it a live or pre-recorded event. To Tiffany Martinka, a chicken producer from northeast Saskatchewan, real time is the way to go.

“If possible, I highly recommend doing it live because it allows you to interact and
engage with the audience,” says Martinka, who in one event took 100 classrooms on a tour of her barn to educate students about chicken production. “If I can engage with them and have them asking questions, it gives them a much richer experience.”

Of course, it also depends on the quality of a barn’s Wi-Fi. Everyone I consulted underscored the importance of doing a dry run to test the strength of the facility’s internet connection throughout the barn and note any ‘dead spots’ where it’s weaker.

Kelly Daynard, executive direction of Farm and Food Care Ontario, did just that when organizing a virtual tour of a layer barn. It proved to be a wise precaution. “It was a beautiful barn, but we absolutely could not get a Wi-Fi signal,” Daynard says. Thus, the producer pre-recorded a tour of her barn. And during the live broadcast, the farmer was there to answer questions as attendees watched the recording.

Asking people beforehand what they hope to gain from the tour is another good idea. When Martinka hosted an event for parliamentary secretaries, for example, she knew they were more interested in sustainability and the environmental impact of livestock production. Thus, she planned the event accordingly. “So, knowing your audience is really important,” she says.

In terms of equipment, it’s possible to host a quality event on a shoestring budget. Harley Siemens, an egg farmer from Rosenort, Man., had an employee follow him with an iPhone mounted on a gimbal, which is a handheld accessory that ensures the device is level during videos. Gimbals  go for about $130. He also used a Bluetooth headset ($50) with a mic attached for quality audio.

For producers looking to get started with hosting virtually barn tours, Martinka recommends starting small. She first hosted one classroom with help from a friend to assess what works and what doesn’t. “That’s a great way to get feedback and practice,” she says.

Daynard advises virtual hosts to shoot in landscape to show more of the facility. She also says to be mindful of lighting and shadows. Additionally, she says to keep the event to about 20 to 30 minutes. “We find that’s the maximum attention span people have with these events.”

Everyone I spoke to vows to continue hosting virtual tours even when the pandemic and the latest avian influenza outbreak are behind us.

For one, they provide greater reach than in-person events.  Cost is also a barrier for classes to attend in person. Biosecurity will always be a concern. Lastly, Siemens says virtual is  just as rewarding as in person. “I just love talking about what I do.”