Features Producers Profiles although it took more than 20 years for Etsell to fullfil his dream of being a farmer. B.C. just the dreamer. In the case of Abbotsford neither the dream nor the dreamer died Poultry Production They say a dream never dies turkey grower Garnet Etsell

He took the long way into turkey farming 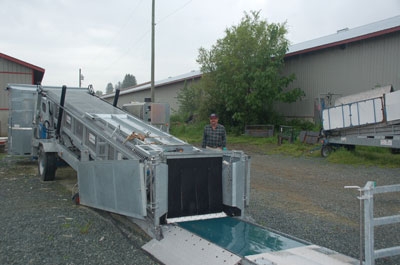 After the avian influenza outbreak getting catching crews was nearly impossible, so Etsell bought some catching equipment from Italy to do it himself. He also catches about half the turkeys in the province for processor Lilydale.

They say a dream never dies, just the dreamer. In the case of Abbotsford, B.C., turkey grower Garnet Etsell, neither the dream nor the dreamer died, although it took more than 20 years for Etsell to fullfil his dream of being a farmer.

Originally a city boy, Etsell spent his late teenage years on a Chilliwack, B.C., blueberry farm his parents purchased when he was 15. Although they “paid for my university,” berries didn’t interest him. Ironically, his wife Debbie, whom he met in the blueberry fields, is now executive director of the B.C. Blueberry Council.

Of more interest was his uncle’s hobby/sheep farm, which “convinced me I wanted to be in agriculture.”

He began by “learning about feed conversion” at Alberta’s Olds College. That wasn’t promising, as the conversion rate for beef “didn’t make a lot of sense,” and he didn’t like hogs, which had a better rate. Despite that, he continued his education in agriculture, earning a bachelor of science in agriculture from the University of British Columbia in 1977, following up with a two-month milker training course at Fraser Valley College in Chilliwack. A short stint as a dairy herdsman “convinced me farm wages would never get me a farm.”

So back to university he went, earning a business degree in accounting. After articling as a chartered accountant with Deloitte-Touche in Vancouver, he moved to the small McKnight Johnson chartered accounting office in Chilliwack “because they had an agricultural clientele and it offered a better chance to be in ownership and/or management.”

He also bought a small sheep farm in Chilliwack, but it never amounted to much. “I never worked so hard for so little,” he recalls.
When McKnight Johnson started merging, first with Peat Marwick, then eventually KPMP, Etsell realized an ownership opportunity was slipping through his grasp. It was time to make a change.

“I still wanted to farm. I was interested in ranching or dairying but I still didn’t have enough capital.”

Then two things happened almost simultaneously that helped him on his way. One, he left public practice to take up a position with Clearbrook Grain & Milling (CG&M), becoming the chief financial officer of an agri-business encompassing 21 poultry farms, two hatcheries and a feed mill. Two, Chilliwack District expropriated his small sheep farm, giving him “a bit of capital.”

Over the next few years, he built up that capital through several real estate development projects initiated by CG&M. The company also exposed him to poultry, a sector he hadn’t previously considered.

“I didn’t like eggs, and turkeys interested me more than chicken,” so when the Friesen family (who own CG&M) decided to divest one of its turkey farms, Etsell bought it.

“We wouldn’t have been able to get into farming without the help and support of the Friesen family. I knew nothing about turkey when I started and they were great at helping us.”

After farming for about five years and slowly scaling back from CG&M, he saw an abandoned 67-acre farm with lots of potential.

“I merged my turkey quota with that of Ray Nickel (who also owns organic and conventional egg farms and was a CG&M fieldman at the time), bought the property and started Coligny Hill Farms with a new three-stage turkey barn.”

Recently, Etsell bought out Nickel’s interest after his sons, Andrew and Nathan, wanted to get involved in the farm and “Ray didn’t want to be partners with my kids.”

Rather than expand the turkey operation, Etsell actually reduced his quota holding to diversify his farm.

He first diversified into catching. Getting catching crews has always been difficult but after avian influenza, it became almost impossible.

“We would end up having to help catch the turkeys, which I didn’t particularly like. I thought there had to be a better way,” Etsell says.

At the same time, Lilydale, which processes most of the turkeys grown in B.C., wanted to change its handling system. So Etsell bought some catching equipment from Italy and now loads out about half of Lilydale’s turkeys.

Run by his son Andrew, the catching crew numbers only four people, compared to the 12 or more it takes to catch turkeys by hand.

“One reason we moved to the type of catching system we have is for biosecurity. We have less people, and hot water pressure to wash our machines after every farm and disinfect them if necessary. It reduces the risk.”

Andrew is also completing a horticulture degree and, to accommodate those interests, Etsell is planting two acres of grape vines this year.

“We’re getting vines from both the Okanagan and France. We’re planting two acres this summer, will plant another four acres next year and plan to add another four after that for a total of 10 acres. Then we’ll decide if we just want to sell the grapes or put in our own winery.”

With Nathan looking after the turkeys, it has given Etsell time to get very active in industry organizations.

“When I get involved in something, I want to jump in with both feet,” he explains. Within a year of buying his turkey farm, Etsell became a director of the growers association.

“When you get involved, you learn how industry works and how government and industry interact and that’s fascinating.”

A year later, he ran for the B.C. Turkey Marketing Board, but lost. He now calls that loss a blessing in disguise.

“Marketing boards are mostly regulators and I don’t think I would have liked that. I like discussing policy.”

Instead, he became a B.C. representative to the Canadian Federation of Agriculture (CFA), being elected second vice-president in 2008. Although he is no longer a vice-president, he remains on the CFA executive council.

When Nickel, who had been the poultry rep on the B.C. Agriculture Council, stepped down from that position a few years ago to concentrate on his growing farming enterprise, Etsell stepped in. He quickly moved up the ranks, being elected president in 2010.

“What I’ve enjoyed about sitting on these committees is how thankful I am to be in a commodity which has a mechanism to generate a reasonable return.

“If we didn’t have supply management, we would do what all farmers do: Put in a little more to compensate for lower margins, which would drop prices even further until the whole sector is losing money.”

He notes the recent collapse and recovery of the turkey industry is an example of the benefit of supply management.

“We cut back production for one year and now we’re back. Unlike other commodities, we didn’t really lose that much.”

However, he warns his fellow producers not to become complacent.

“Supply management has to be responsible in how it responds to the marketplace. We have to supply the product it wants at a reasonable price. Price is still consumers’ number 1 concern.”