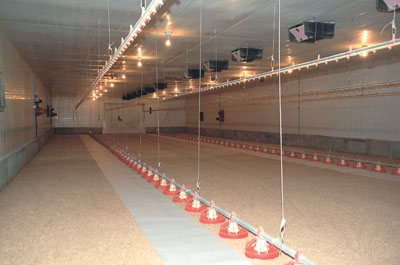 The complete absence of brooders is the first thing noticed in Richard Yntema’s chicken barn. The barn is heated and cooled using geothermal energy. Along the walls are the (red) heat exchange units and side vents. There is also a row of vents along the ceiling.

The first thing you notice when you step into Richard Yntema’s chicken barn in Enderby, B.C., is the complete absence of brooders. That’s because it relies on geothermal heating and cooling.

“The concept of extracting heat from the earth and putting it back into the earth for storage always fascinated me,” Yntema explains.

It’s a fascination he shares with few other chicken growers, as Yntema’s barn is one of only a handful in Canada to utilize the concept. Yntema says one of the other growers, located in Alberta, does not like his own system, but both he and Jim Croken of Okanagan Geothermal, who designed and built Yntema’s system, blame that on poor design and installation.

“It all comes down to design,” Croken says. “The biggest problem is that there are no standards for the industry. A lot of people doing geothermal either don’t have the expertise or try to cut corners and that gives us all a bad name.”

It is no surprise some people try to cut corners as geothermal systems have a high capital cost. Yntema readily admits his facility cost “seven times” that of a conventional barn. That is not just because of the geothermal system but also because he splurged on every other aspect of the barn, which in itself cost “three times” as much as a wood-frame barn to build.

“You get what you pay for,” he says simply.

Instead of wood frame walls, Yntema’s barn has eight-inch walls, composed of two inches of styrofoam and 5.5 inches of concrete in a plastic liner.

“The walls and floors are mouse-proof and have a 25-year warranty as long as you don’t back into them,” he notes.
The piping for the geothermal system is embedded in both the floor and the walls. Each can be run independently and used to either add heat or extract it from the barn. That ability to both add and remove heat is what separates geothermal from conventional in-floor heating systems.

Yntema heats the barn to 38 C for the day-old chicks, then gradually reduces the temperature over the five weeks the chicken are in the barn. That means switching to a cooling mode for at least the last quarter of the cycle, as by then the birds are generating more heat than they require. At the end of the cycle, the floor temperature is down to 18 and the barn temperature is at 21.

“The temperature is uniform throughout. Even on day 1, the chicks are spread throughout the barn, as there’s no cold spot anywhere,” Yntema notes.
He still has a few vents but their only purpose is to “bring in enough fresh air for life support. We don’t ventilate at all for the first two weeks.”

“There is a huge difference in geothermal cooling. Other farmers are pushing cool air into the barn; we are sucking heat out,” Croken explains.

The system does require different management than a conventional heating/cooling system. There is no instant heat or instant cooling as conventional farmers can achieve these effects by either turning on the gas or turning on the tunnel ventilation. Instead, Yntema starts the system 10 days in advance of receiving chicks so it is up to the required temperature when they arrive, then keeps his eye on weather forecasts and adjusts the system to ensure the barn will maintain the required temperature even with dramatic increases or decreases in the outside temperature. This is helped by the fact the heavily insulated, white-sided barn takes much longer to lose its heat or its coolness, as the case may be, than a typical barn – one reason Yntema experiences few, if any, losses during a heat wave.

The geothermal system, which is also used to run the coolers in Yntema’s on-farm game meat processing plant, includes four heat exchangers that extract or dispel heat through piping buried in 26 250-foot trenches spread around the 50-acre property. The heat recovery units have an automatic wash cycle that sprays water onto the unit for 1.5 minutes every hour they are in use to ensure the intakes do not clog. Although the initial costs were high, Yntema is convinced of the system’s value.

“You get happier chickens, you use less energy, less bedding and less feed, you do less maintenance and cleanout is much quicker.

My heating costs are the same in summer and winter. My costs are actually higher in the summer when I have to pull more heat out,” he states.

Because the in-floor heating keeps the litter dry, there is no ammonia in the barn and the chicken develop no breast blisters.

Although dry litter may result in slightly more dust, Yntema insists, “I would pick dust over ammonia any day.”

Yntema’s barn is only 125 by 40 feet and houses only 6-7,000 birds, which his wife received on the new entrant program. However, he sees no reason the system would not work equally well in a barn “five times as big.”

Nor does he regret his decision.

“I have run 16 batches of chickens through the barn and maintenance is practically non-existent. It still takes me just three hours to clean out the barn and the floor still has no stains on it. If I would get more quota, I would build another barn just like this because I know it works. I’ll still have something in 15 years when other farmers will be looking at rebuilding.”