Getting ahead of early chick mortality 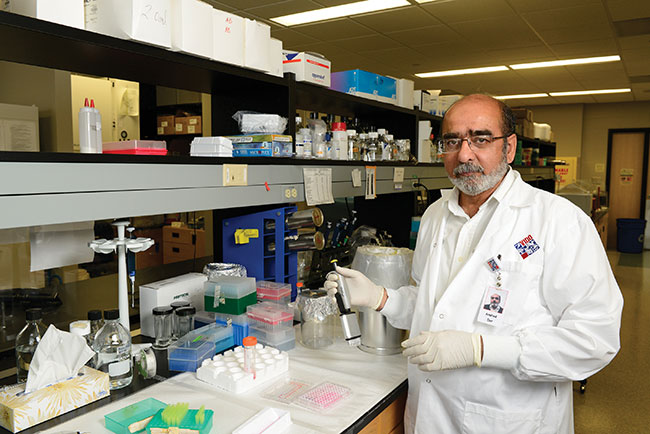 Arshud Dar’s research has led to the development of a non-antibiotic that may be a potential candidate for the control of yolk sac infection.

Bacterial infection leading to early chick mortality in poultry flocks is a common concern on Canadian poultry farms. To manage risk, producers commonly use preventative antibiotics to ward off infections before they start. But with public health experts around the world expressing serious concerns about rising rates of antibiotic resistance in animals as well as humans, there is growing demand for antibiotic alternatives.

Arshud Dar, research scientist with VIDO-InterVac at the University of Saskatchewan, is leading research into effective, safe and economical non-antibiotics that allow for the prevention of microbial infection in neonatal chicks. His research has led to the development a non-antibiotic that may be a potential candidate for the control of yolk sac infection (YSI), one of the biggest contributors to early chick mortality.

“Yolk sac infection is the most frequent cause of early chick mortality, leading to death in the first two weeks post-hatch and poor carcass quality in the birds that survive,” Dar says. “When we began researching non-antibiotic alternatives, we first had to identify and characterize the bacterial pathogens associated with yolk sac infection in broilers.”

Dar’s team worked with more than 600 field samples from Saskatchewan broiler operations to narrow in on two avian pathogenic E.coli strains that were responsible for more than 90 per cent of the YSI cases studied. Next, his team developed an infection model in the lab to experimentally reproduce the disease.

The team identified and selected four innate immune stimulants. They applied each stimulant in ovo (directly to the amniotic sac) of 18-day embryos.

“We wanted to apply these in ovo because it would be much easier and cost effective for the producer to administer in a hatchery setting, and would require less labour,” Dar says.

Of the four innate immune stimulants researchers tested in these studies, in ovo administration of three of the stimulants tested showed promising results. One immune stimulant – known as CpG ODN – showed the highest protection activity against YSI, and Dar says it may serve as a potential candidate for replacement of antibiotics.

Now, as part of a Poultry Science Cluster 3 project, Dar’s team is continuing its work, with an eye toward determining optimal dosage, and combining other innate immune stimulants that may make the dose more effective. The team is also working to determine the potential for interference with other in ovo treatments such as the Marek’s disease vaccine.

“It is possible that, with ongoing research, in ovo administration of CpG ODN alone or in combination with other innate immune stimulants could eventually become a routine hatchery practice to control YSI, and significantly improve disease resistance, growth rates and vaccine responses in young chickens without antibiotics,” Dar says. “Reduction of antibiotics is a very big issue. These studies will benefit not only farmers but human health as well.”

This research on non-antibiotic control of bacterial infection was funded by the Canadian Poultry Research Council as part of the Poultry Science Cluster, which is supported by Agriculture and Agri-Food Canada as part of Growing Forward 2 and the Canadian Agricultural Partnership, a federal-provincial-territorial initiative. Additional funding was provided by Chicken Farmers of Saskatchewan and the Agriculture Development Fund of Saskatchewan.