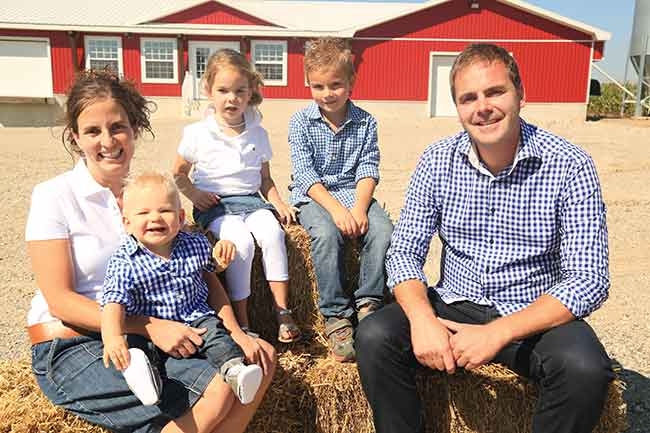 Getting into the chicken industry under the Chicken Farmers of Ontario (CFO) New Entrant Program is a long-term commitment, but for Jamie and Melissa English of Alliston, it was exactly the opportunity they wanted.

Both Jamie and Melissa had grown up on a family farm. Their parents relied heavily on outside jobs for income. Melissa’s parents ran a cow-calf operation and worked for the Ministry of Transportation Ontario; Jamie’s parents farmed potatoes and grains before moving into the logistics industry. For these farm kids, their challenge was to find a way to get back into farming and they found it through the New Entrant Program.

It was 2012 when the young couple first heard about the program. They started researching the industry, talking to farmers to find out what was involved. “We wanted to make sure this was what we actually wanted to do… what the industry was like.”

Under the program formula, new farmers were required to buy 4,000 units of quota and borrow the other 10,000 units from the CFO to meet the minimum production requirement of 14,000 units. The market sets the quota price, making it difficult to predict the eventual total investment. Between five and fifteen years the 10,000 units are paid back to the CFO under a timed schedule.

The application process involves presenting a business plan to an industry panel of financial and farming experts that evaluates the application and makes recommendations to the CFO Board of Directors. Successful applicants have up to 18 months from the date of approval to execute their business plans.

The next step was to get a business plan together. The application was handed in on the 31st of October and the green light was given in March 2014. Jamie and Melissa were very excited to be one of two farms chosen and soon began construction on their new facility. “There was a lot of red tape with setbacks and also with Nutrient Management, so those were a few challenges,” said Jamie. They knew they only had one chance to build, going with a 16,500 square foot barn, large enough to capture future growth but small enough to manage costs.

Jamie really focused on the equipment because that’s where he felt he’d get good payback. They went with a system of what he called ‘back-end brooding’ – where the birds were kept to a smaller area for the first 10 days so that the humidity and temperature could be controlled. He added extra drinkers to give the birds a really good start and extra heaters help to keep the temperature even.

Their first transition crop was in October 2014 and Jamie admitted they “had a bit of a learning curve.” That first flock had five percent mortality but they met their weight targets; their second flock had 3.2 percent mortality and their weights were a little over, held back a day on the processing end. These first two flocks seeded the barn with good bacteria to help the next flock to fight disease naturally; their next flock will be meet full RWA (Raised Without Antibiotics) criteria.

Jamie gives thanks to the many farmers and other people in the industry that continue to give them a lot of help and advice and leadership. “A lot of people were very open; local farmers helped out immensely.”

Overall Jamie is a huge fan of the quota system, knowing that he’s building something that he can pass down to their children. “We’d be crazy if we ever had the chance to lose it and didn’t make sure we did everything we could to hang onto it.”

As Jamie prepares for his next flock, he continues to work off farm as well, but for his family, “it’s good to get back to where our roots are and into something we’re passionate about. For that we’re really fortunate to be part of this program – it’s helped us to get into something that we really wanted to do.”

The story was similar for Joannette and Jim Van Hemert, only for them it was a new adventure as egg farmers.

Jim Van Hemert is a Ridgetown graduate and obtained his B.Sc. in Ag. Business at the University of Guelph before taking positions as an account manager at TD Canada Trust, then RBC, but his real passion was in farming. He grew up on a poultry farm in the Fraser Valley of British Columbia. His wife Joannette grew up in Norwich and shares a similar strong financial background – the McMaster graduate obtained her CA designation in 2010.

They combined their business savvy to analyze several different options to get into farming, deciding in 2011 to buy a turkey breeder operation in Ingersoll. Not long after moving in, Jim began growing turkey poults at a rented property in Thorndale, bringing them in as day olds, growing them until they became mature breeding stock before transferring them to the Ingersoll farm.

It was around the same time that they started asking questions about the New Entrant Quota Loan Pool (NEQLP) program. It was an opportunity to diversify their operation from being solely reliant on a contract with Maple Leaf Foods as well as enabling them to take advantage of the benefits of supply management: reduced price risk, increased stability and long term sustainability. As for the business side of the equation, it was also a means of reinvesting cash flow into the company.

The Egg Farmers of Ontario NEQLP program, now in its fifth year, lends up to 10,000 units of quota split between two new entrants every year according to the needs of their business plan. The quota is lent on a 1:2 ratio, meaning that one unit must be purchased for every two units loaned. After 10 years, the quota is returned to the EFO in ten annual installments. Overall it is a 20-year commitment.

The application consisted of forms and a business plan – a 10-page written report  – that were both submitted in May 2012. It was a long wait until September to hear they were finalists and a one-hour interview would be arranged. The interview was successful; it was now November 2012. They had 18 months in which to begin production and there was a lot of work to be done. Where would they build a barn? What systems would they use? How large would the barn be? Would there be quota available to purchase?

Their original projections were for 12,500 hens. That quickly rose to 15,000. With that number in mind, details of the actual project started to surface, such as finding the right building contractors and deciding which equipment to install?

Due to disease transmission concerns with the turkey operation they needed to seek a new location for their 290’ x 30’ layer barn, finding a 70-acre property within a short drive of their farm where they could build. They decided that traditional cages would be the most cost effective and efficient system to install. The enriched cages represented additional costs without benefit, and free run was considered too labour intensive.

By July 2013, Bright Horizon Farms announced their open house in the paper. With some help from the industry that included Clarke, New Life, Burnbrae and McKinley Hatchery, their first flock arrived in the new red and white barns on July 16, 2013. Despite some trouble with cracked eggs, Joannette considered that first flock a success.

Looking back, Joannette sees the NEQLP program as an opportunity to farm with the stability that was lacking in the turkey breeding operation. Without it, they wouldn’t be layer farmers today.