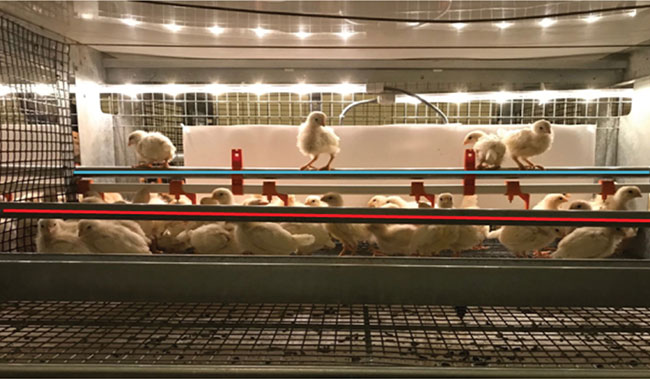 Research has already confirmed that laying hens headed for open-concept aviary systems perform better when they are raised in the same type of environment. But there are many different designs that offer different types of space where birds spend their first few weeks. So, how does aviary design make a difference to young pullets for the lifelong health of hens?

University of Guelph’s Tina Widowski and her MSc student Amanda Pufall recently took a closer look at the impact of different rearing environments on pullets. They compared locomotion and musculoskeletal development of pullets reared in three styles of aviaries on commercial farms across Canada.

“We know we need to rear birds differently when they are destined for aviaries. They need to learn to negotiate the new space with confidence and strong bones and muscles,” says Widowski, who is the Egg Farmers of Canada Chair in Poultry Welfare at the University of Guelph.

The on-farm research was conducted in 2018 and 2019 on 15 commercial poultry operations in Ontario and Alberta. Producers who were already using non-caged aviary systems were enlisted to be part of this practical research to build more knowledge to help producers.

“We wanted to see if all the rearing aviaries offered the same benefit for the birds, as we know the first few weeks are important for the young pullets to learn how to negotiate the aviary system, and build bone strength and overall physical fitness,” Widowski says.

Three styles for brooding
Participating farms included five flocks with each of the three aviary styles studied – varying in the amount of vertical and horizontal movement available to pullets during the brooding period. All styles included a closed confinement area where pullets spent the brooding period, before opening up to more space through the rest of the rearing period.

Style one was the most confined during brooding – birds were housed in compartments with perches and the least amount of vertical space available for movement. The brooding compartment in style two offered a taller space with more perches at different levels and a fixed height elevated platform at the back. Style three offered the most space and perches in both the brooding compartment and when the aviary was opened up. White and brown flocks were represented in the study.

Pufall made three visits to each farm – when birds were still in the brooding compartment, in the middle of the rearing period, and a final visit when pullets were 16 to 17 weeks of age. The researchers videotaped bird activity and analyzed it for all types of locomotion.

“We were looking to see if the different systems changed the amount of locomotion the birds were performing,” Widowski says. “We look at all types of locomotion – jumping up, jumping down, flying, walking, running, standing and sitting.”

At the second and third farm visits, the scientists examined muscles and bones for strength and size, post-mortem. 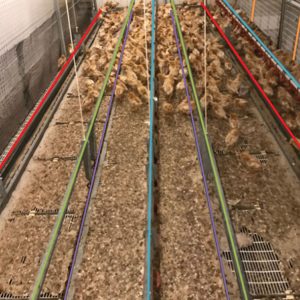 Each style involved a closed confinement area during the brooding period. Red lines are feeder perches. 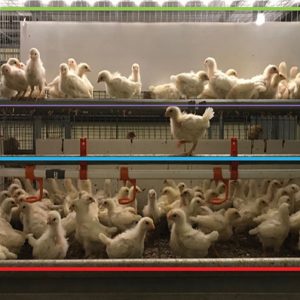 Motion and muscles
Not surprisingly, birds moved around the most in aviary systems with the least amount of confinement. “Birds in the most open concept style (three) moved more, doing more running, wing flapping and ‘aerial transitions’ with little flights using their wings to move between vertical levels,” Widowski says.  There were also significant differences between white and brown birds. White pullets performed more jumping and generally used their wings more to move between levels.”

When analyzing muscle and bone development, the differences in aviary styles showed up in leg strength but not in muscle weight. “We had hypothesized that giving birds more opportunity for exercise from day one would result in stronger leg bones, and we saw consistently larger and stronger leg bones in pullets raised in the most open concept style three, followed by style two.”

Pullets with the space to perform more vertical transitions had the strongest leg bones. “We know white strains tend to use vertical space better, and they had proportionally heavier pectoral muscles, lighter leg muscles and larger keels than brown strains,” Widowski says.

“These results indicate that the style of aviary and strain of pullet do impact locomotion and musculoskeletal characteristics, which may impact their long-term success in an adult aviary,” Pufall says.

On-farm research
A larger part of this pullet research includes comparing aviary-rearing systems in a lab setting. And while results from this commercial work can’t be statistically compared to ongoing lab research that Widowski has underway, she knows it’s important to look at pullet development in both settings. “The commercial setting involves thousands of birds, compared to a few hundred in a lab setting, and that probably impacts the interactions between birds,” Widowski says.

Field research also provides a critical link with commercial operations – the chance to share information and gather input and feedback from producers. “Working directly with producers was a wonderful experience and a great way to engage producers directly in research,” Pufall says. “They could see the differences first hand and understand how our research might be applicable directly to their farm.”