In influence of China and its potential impact

In order to evaluate China’s influence on the global poultry industry, we must first understand the economic position of China. 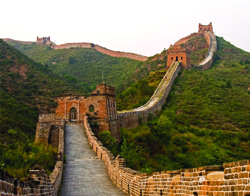 In order to evaluate China’s influence on the global poultry industry, we must first understand the economic position of China.  To better compare, I have included data in brackets for the other Asian giant, India.  China has a land mass of 9.6 (3.3) billion square kilometres and is home to just over 1.2 billion people (1.1).  Population growth is low at 0.6 per cent per annum, compared to a global average of just over one percent and 1.4 per cent for India.  The annual GDP for China expressed in $US/PPP is 6,800 compared to 3,300 for India.

Some predictions indicate that China will grow from 3 per cent of the global GDP in 2005 to 17 per cent in the year 2030.  This increase will be at the expense of Japan and the EU who will both have little or no population growth.

In 2005, the amount of income spent on food was 36.9 per cent, and this is expected to fall to around 20 per cent over the next two decades.1 In absolute terms it is forecast to grow from 175 billion dollars to 683 billion, a growth of over 500 billion dollars.  No wonder the world is looking at China as an investment opportunity but also as a competitor, both for markets and for raw material supplies.

Historical Growth
We can separate the growth periods into two distinct periods the decade of the 90s and the current decade (see Table 1 ).  Due to the outbreaks of BSE, many countries experienced a fall in beef consumption in the period 1990 to 2000, so the growth in China was actually greater than the global total.  The participation of China in the growth of the hog and egg sectors was phenomenal.  For chicken the participation was much more modest although this was the largest growth of any country in the world.

In the current decade China has only contributed with 10 per cent of the growth in global consumption of poultry.  Outbreaks of avian influenza and SARS have contributed significantly to the slowing down in the sector.  In each of the beef, pork and egg sectors China has continued to dominate global growth leading all three segments.

However over the period of 15 years from 1990 to 2005 chicken increased its market share from 12 per cent to 20 per cent of the meat consumption while pork dropped from 80 to 63 per cent. 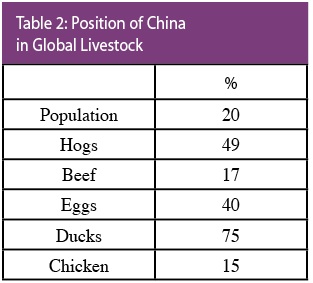 Table 2 shows the position of China in 2006 compared to the global livestock position.  However, it is estimated that disease affecting hogs resulted in a loss of seven per cent of the total number of hogs.  This would reduce the global share of hogs to 46 per cent.  China also dominates both the egg and the duck sectors but chicken consumption is still well below world average.

Although accurate numbers are not available it does seem that the number of native birds is slightly higher than the Western broiler although in tonnage the position is reversed.  So from the perspective of western genetics companies, China is well behind Brazil, which will produce over five million broilers in 2008 compared to an estimated three million western broilers in China.

The big question mark over livestock production is the grain situation.  China is the second largest corn producer in the world with about 20 per cent, similar to its population.  The planted area is similar to that of the U.S. but yields are only just over a half.  Stocks of corn have been steadily eroded since 2001 and exports have all but ceased.  China has introduced a moratorium on the building of new ethanol plants.

For soybeans the situation is far more difficult, with China producing about seven per cent of the global production.  This has resulted in the imports of 15 per cent of global output.  This is obviously a strategic issue for the country and the press has indicated that China is actively encouraging its companies to buy land in South America.

A key factor in the surge in demand for soy is probably the increase in industrialized production as compared to backyard.  More complete feed is certainly being produced and this will use more soybean meal or full fat soy in the formulations.  This trend will certainly continue as food safety and disease issues are being addressed.

Production performance has to overcome many challenges.  There are extremes of climate ranging from 30 degrees below zero to 40 degrees above.  Often feed ingredient quality is not up to standards required by the modern birds.  A large number of small farms, 300,000 farms with less than 2000 birds each, make control difficult.  The tendency will be that the large integrators will slowly consolidate the industry and find solutions in the form of larger farms and consequently exercise more technical control over the broiler flocks.

A similar situation exists with processing plants.  It is estimated that there are about 1500 processing plants, of which more than half process 20,000 birds a day or less.  There are very few plants that have a daily production close to the average Brazilian plants of over 160,000 birds per day.  Again the monitoring of such a large number of plants is a difficult task and almost certainly contributes to the difficulties in the area of food safety.  The consolidation mentioned above should reduce by more than 60 per cent the number of small plants and the doubling of the number of large plants.  Both Chinese and foreign companies have projects to implement large complexes in the near future.

The need for this consolidation is also driven by the needs of the fast food sector.  In the year 2000 there were about 800 outlets of Kentucky Fried Chicken, McDonald’s and Dicos and by 2007 it is estimated that there were over 4,000.  It is fair to say that the rate of future growth is dependent on the availability of reliable supplies of good quality product.

In the past decade Chinese poultry exports have been under extreme pressure.  In the late  ’90s issues with residues resulted in a complete ban on EU imports from China, a situation that still exists although recent negotiation indicates that this ban will be lifted for cooked product.  Similar residue problems affected exports of raw poultry to Japan and reduced market share into Japan, even though logistic, 48 hours in many cases, gives China a significant competitive advantage.

Outbreaks of SARS further reduced raw exports and then in 2004 outbreaks of avian influenza in China and Thailand led to a complete ban on exports of raw product from the two countries.  By 2007 poultry imports into Japan were about 50/50 raw (90 per cent from Brazil) and cooked.  China held a dominant market share up to 2007 of 58 per cent of Japanese cooked imports. However, in the first three months of 2008, Thailand held a slight advantage.  This seems to be an immediate response to the food scares in Japan originating from Chinese imports late in 2007.

China, including Hong Kong, is now the worlds’ largest importer, although the large quantity of paws helps to achieve this position.  The U.S. has been the largest beneficiary of this easing of import restrictions with well over half of these imports followed by Brazil.  It is interesting to note that the three different products: leg quarters, wings and paws go to different geographical regions.

One might ask why China needs to import with the production capacity available?  In this respect China is in a similar position to the EU.  The EU has to import breast meat, as it would have a huge excess of leg meat and wings if it produced all its own breast meat.  China has the inverse situation in as much as if it increases production to cover leg and wing demand it will have an excess of breast that is impossible to sell under current market conditions.

The growth in consumption of any food product is a function of three factors:

As we saw in the introduction the forecast population growth is low at 0.6 per cent but as Table 3 demonstrates, income growth is still highl.  The figures are for 2006 and preliminary estimates for 2007 are over 11 per cent.

In this decade high GDP growth did not translate into a corresponding increase in poultry consumption.  However, in 2007 it is estimated that consumption grew by over five per cent.  Part of this was due to the problems with hogs, but it does indicate that the problems of avian influenza, although an ever present threat, now has less impact than when it first appeared.

The two main issues facing the industry for the future are food safety and the high price of grains.

The food safety issues will only significantly decrease, with the reduction in the number of small farms and processing plants.  There will almost certainly be a shift towards larger companies with a much larger market share than they have today.

The largest company in China today would occupy quite a low ranking in a Brazilian league table.  The presence of branding is very important as we saw during the AI crisis that the brand names at meat and fast food levels retained their volumes.

The price of grains is not just a China issue.  It is estimated that the global broiler industry has $28 billion US a year extra costs compared to 2006.  This is about a 35 per cent increase and much of this has not been able to be passed on to the consumer.  Large losses by U.S. public companies in the last quarter are testimony to this.  As there seems to be no solution in sight to the grain supply and demand, we can expect today’s price levels to be around for a minimum of five years.  Chicken, as the lowest cost of all the meats seems to be a beneficiary in the short term, but lower income consumers, of which there are many in China, could have difficultly in purchasing product.  When this has happened in other countries there has been a movement to smaller bird and/or cheaper cuts.

China is not seen to be a threat to the major exporters such as Brazil and the U.S.  Competition with Thailand to supply the cooked market in Japan will continue to be intense.  Improved food safety, actual and perceived, will again swing the pendulum in favour of China, due to the logistics benefit, with some Chinese ports only 48 hours distance from Japan.

As consumption resume higher growth, the balancing of domestic production and consumption of the chicken parts should result in increasing imports, especially from the U.S. and Brazil.

The demand for grains, especially soybeans will continue to outstrip meat growth as more backyard operations are eliminated.  This will keep pressure on the demand side and consequently prices.

Gordan Butland was a keynote speaker on this topic at the XXIII’s World Poultry Congress, Brisbane, Australia.