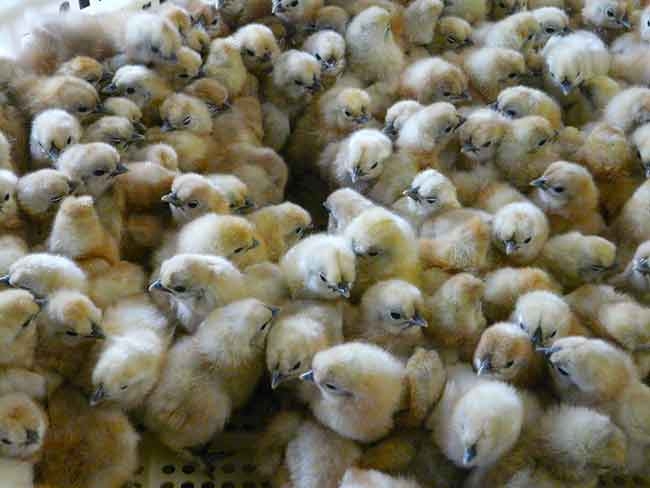 Lakeside Game Farm produces about 9000 chicks a week depending on the time of year, and recently purchased a new incubator to boost the hatch rate

The demographics of southern Ontario continue to change and evolve, offering new areas for market growth, states the Chicken Farmers of Ontario (CFO). CFO noted recently that the Chinese and South Asian population is now over 1.3 million in the Greater Toronto Area, and many of these folks really like fresh ‘head and feet on’ chicken. Production of these birds (Frey’s Dual Purpose “yellow” chickens and Silkie chickens) is currently 0.4 per cent of Ontario’s annual chicken production, and the market is estimated to be over 3.0 per cent. All this, says the CFO, demonstrates that the Ontario specialty breeds chicken market is a significant business growth opportunity.

Lakeside Game Farm is the largest provider of fresh ‘head and feet on’ Silkies into the Ontario market. Henry Ebert began marketing the black-skinned, dark-fleshed chickens on his game preserve about 20 years ago alongside ducks and geese, when someone made a request that he do so. His son Jim has taken over the business, officially buying it in 2010, but it was back in 2004 that Silkie production on the farm grew substantially. “We were stuck with some birds that someone ordered but didn’t pay for, and we found a market,” Jim says. “After that, we kept production at about 5000 and now it’s at 8000 birds a week.” He sought some contractors to supplement his production around 2004 and has three of them right now.

Silkies take longer to reach market weight than standard broilers – 11 to 12 weeks for roosters, and 13-14 weeks for female birds. Other than that, Ebert says production and health concerns are similar and he feeds an all-grain standard ration. He sends birds for processing two to four times a week, and has 14 groups of differently-aged birds in four different rooms in his brand new barn (each one at a different temperature) in order to keep up with fresh production flow. “I’m renovating my layer barn as well,” Ebert reports. “I supply myself and my contractors with chicks. It’s a unique operation in the poultry business, to do it all, start to finish.” Ebert does almost everything on the farm, from bird care to delivery of birds to the processing plant, with the help of two part-time employees.

CHALLENGES ALONG THE WAY
Ebert’s success is the result of working steadily for years to establish himself in the Silkie market, and he says he now has only one competitor in the province. However, that wasn’t always the case. Ebert observes that over the years, there were people who would jump into production after hearing there was money to be made, people who would create too much supply and then undercut each other. Everything changed last year though, when CFO began regulating Silkies under its Specialty Breeds Chicken program (see sidebar). “You need a permit now,” Ebert explains.

Lakeside Game Farm produces about 9000 chicks a week depending on the time of year, and recently purchased a new incubator to boost the hatch rate. “My incubators were 20 years old, so it was time,” he says. “I went with a multistage Jamesway unit, which was a big investment, but it’s paying for itself. The hatch rate has gone from 60 per cent to 80 per cent, and the chicks are doing five per cent better too. They’re just healthier and they’re fed the same day they’re hatched.”

Ebert sits on the CFO Specialty Breeds Chicken program committee, and says that members are trying to learn more about how fresh specialty markets work. “There’s a desire for producers like me to weigh each bird before it goes for processing, but I just can’t do that because it would be very time-consuming and it would delay me, as I have all sorts of orders coming in all the time, many of them last-minute,” he says. “I am very much in favour of continuing on with using an average weight per bird.”

Ebert says that because there are still many frozen specialty chickens being imported into Canada where a fresh product is very much desired, the market for Silkies will continue to grow. He believes using a permit system, as opposed to quota which is very expensive for new growers, is the best way to grow the market.

For his hard work, including optimizing the use of his new hatchery and his barn investments, Ebert just won a 2015 Premier’s Award for Agri-food Innovation Excellence. “It’s nice to win the money and get some recognition for hard work,” he says. “Before, you wanted Silkies to be a secret. You didn’t want to advertise, because someone would jump into the market and prices would go down. Now that’s not going to happen with the regulation in place. The stability is great and the barn inspections have been great for my contractors to improve production.”

SPECIALTY BREEDS CHICKEN PROGRAM
In September 2014, Chicken Farmers of Ontario (CFO) approved a new program to support increasing consumer demand for alternative breeds of chicken. The program also brings Ontario into alignment with the national Chicken Farmers of Canada specialty breeds policy. Two common breeds of specialty chicken are included, the Frey’s Special Dual Purpose “yellow” chickens and Silkies, both processed with head and feet left on. CFO’s director of communications and government relations Michael Edmonds says the new program was promoted through an advertising campaign and supported by a series of farmer information sessions throughout the province. “The response to the program and information sessions was strong, with significant numbers of interested farmers seeking information,” he notes. “Since the launch a year ago, the program has increased threefold in volume with 21 farmers now supplying the market with more than 50,000 Frey’s Dual Purpose (15 producers) and Silkie chickens (6 producers) per week.”

In order to further promote and support this emerging market, CFO has hired a specialist to work with retailers, processors and farmers to identify opportunities and ensure the supply management system adequately anticipates and supplies growing demand. “The program also places a major focus on compliance to CFO’s Animal Care and On Farm Food Safety Assurance programs,” Edmonds notes. “This focus on quality has resulted in significant investments, upgrades and improvements to the participating farm facilities, particularly in Silkie production. The program has been successful to date and so no significant changes are being considered at this point.”

THE SILKIE
Silkies are well known for their calm, friendly temperament and considered an ideal pet chicken. They are one of the most popular ornamental breeds. Hens are exceptionally broody and make good mothers, so they are commonly used to hatch the eggs of other breeds and species.

HISTORY
The Silkie’s most well-documented point of origin is ancient China, but other places such as India and Java have been named as possibilities. As early as the 7th century, traditional Chinese medicine has held that chicken soup made with Silkie meat is a curative food. The earliest surviving written account of Silkies comes from Marco Polo, who wrote in the 13th century during his Asian travels of a furry chicken. Silkies most likely made their way to the West via the Silk Road and by marine shipping trade. Once they became more common in the West, many myths were perpetuated about them. Early Dutch breeders told buyers they were the offspring of chickens and rabbits. The breed was recognized officially in North America in 1874.

APPEARANCE AND BODY
Silkies have an extra toe or two and poufy plumage, black skin, black bones and grayish-black meat (melanism). Melanism which extends beyond the skin into an animal’s connective tissue is a rare trait, and in chickens it is caused by a rare genetic mutation believed to have first appeared in Asia. In addition to the Silkie, several other breeds descended from Asian stock possess the mutation.

The Silkie got its name for the feel of its plumage. The feathers of a Silkie are furry and fluffy, feeling silk-like, because they lack functioning barbicels, which hold feathers on other bird species down. This lack of barbicels in its feathers also leaves the Silkie unable to fly.

The breed does not generally produce as much meat as conventional chickens. Silkies are often mistakenly called a bantam breed, and although they are considered bantams in some countries, the bantam Silkie is actually a separate variety. Almost all North American strains of the breed are bantam-sized, with the males weighing 1.8 kg and females weighing 1.4 kg. Jim Ebert’s birds (male and female) average about 1.45 kg.