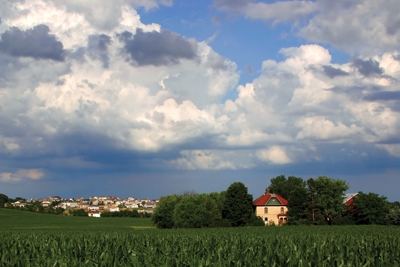 In many parts of Canada, urban encroachment into once-rural areas has been increasing rapidly for the last decade or so. While the loss of prime agricultural land to housing development is of concern, also significant are the burdens placed on agricultural operations from their new urban neighbours. These new neighbours, often ignorant and intolerant of farm practices, compete for resources such as energy, and could drive regulatory change, particularly with respect to odour and emissions.

Research that strives to understand the potential impacts poultry farming has on odour and emissions was presented at the Poultry Industry Council (PIC) Research Day, whose theme was Sustainability: Poultry and People Growing Together.

The presentation given by Dr. Bill Van Heyst from the School of Engineering, University of Guelph, outlined his and his research team’s current work on measuring emissions from broiler facilities and the dispersion of these emissions into the surrounding environment.

Air Quality
Van Heyst noted that air pollution has been linked to cardiac and pulmonary disease in humans, and that the Canadian agriculture sector accounts for upwards of 85 per cent of all human-made emissions of ammonia. Ammonia is a precursor gas of fine particulate aerosols (known as particulate matter (PM)). Both ammonia and PM are precursors of smog, making them of particular concern to Environment Canada, along with CO2 and methane. Ammonia, CO2, methane and PM10 (particulate matter with a diameter of 10 µm) are classified as toxic under the Canadian Environmental Protection Act (CEPA), and thus “the government can place restrictions and/or regulations on their emission levels,” said Van Heyst.

Currently, not all pollutants have a set limit for exposure, but the current Canada-wide standard for PM10 is 30 µm, based on a 24-hour averaging time.

Van Heyst and his research team used the University of Guelph’s Arkell research farm, which houses swine and poultry and is located just southeast of the university, to try to determine what happens to atmospheric emissions from a typical broiler barn. This location was chosen because urban encroachment on this farm has been “significant” in the last two decades, and the “neighbours are not afraid to complain,” said Van Heyst.

Using the AERMOD atmospheric dispersion model, one of the regulatory models used by the Ontario Ministry of the Environment (MOE) to measure emissions from industrial sources, Van Heyst wanted to see if the PM10 standard would be breached.

In the model, Van Heyst and his team “inserted” a broiler barn where the swine facility is located at Arkell, and used PM10 as the pollutant. They input five years of MOE meteorological data and assumed that most of the facility was surrounded by cultivated land, except for the southwest quadrant, which had urban development. They used an emission factor of 8.9 kg/cycle of PM10, based on a case study with an average of 32.5 days to produce birds weighing 1.8 kg.

The model generates what’s called a wind rose, a graphic representation of how wind speed and direction is typically distributed at a particular location. The wind rose showed wind dispersion on a 5 km x 5 km grid.  They found that the broiler barn did not come close to reaching the 30-µm standard for PM10.  However, when the farm was intensified to include four identical barns, each 20 m apart, the dispersion of emissions was much wider, covering a much greater geographical distance from the barns. Although the largest concentration of PM10 remained on the farm property, the level of PM10 was now up 16 µm, almost twice the standard limit.

Van Heyst cautioned that his model has limitations – for example, he only used five years of meteorological data – and he used a constant emission factor for PM10. The latter is not really valid, he said, because as the birds grow, so do the PM10 emissions. Litter moisture and the season will also have an effect. It’s also not easy to accurately model the initial dispersion of the pollutants, he said. Currently, Van Heyst and his team are working on methods to more accurately measure particulate matter, taking all factors into account, including manure storage. When asked by an attendee at Research Day how barn design could possibly mitigate emissions through the type of exhaust system used, Van Heyst said that roof-top ventilation would be ideal, as it would decrease the dispersion area compared to tunnel or side fan ventilation.

Reduced Ammonia
But what if we could decrease the amount of ammonia being produced in the first place? That was a question tackled by Dr. Steve Leeson, a professor with the Department of Animal and Poultry Science at the University of Guelph.

Ammonia released into the atmosphere affects air quality, but lowering ventilation rates is detrimental to bird and farm staff health. So, Leeson tried to determine if the precursor for ammonia production in birds, crude protein (CP) in the diet, could be reduced without affecting bird performance. Initial (unpublished) research by Leeson and his research team determined that by decreasing CP by 0.4 to 1.2 per cent, ammonia output can be reduced by 0.8 to 0.9 g per bird.

But decreasing CP levels in the diet is not a black-and-white solution. CP is essential to maintain the current production levels industry has come to expect as standard.

He and his research team performed feeding trials that “phased” the inclusion of CP (starting with a high level, and then decreasing the CP level over time) in layers. They found it was possible to decrease ammonia output without significantly decreasing performance at an inclusion level as low as 14.5 per cent CP.

They examined the performance of Lohmann birds from 19 to 72 weeks of age, fed diets starting with 20.5 per cent CP, then decreasing two per cent each interval to a low of 10.5 per cent inclusion over the life of the bird. The lowest three CP inclusion level (14.5, 12.5 and 10.5 per cent) diets were supplemented with amino acids to maintain the birds’ level of performance throughout the trial. The amount of feed consumed and ventilation was the same for all levels studied.  The effect on ammonia production was “dramatic,” reducing it from 50 ppm at the highest inclusion level to 10 ppm at an inclusion level of 14.5 per cent CP.

Rate of lay was only significantly affected at the 12.5 and 10.5 per cent inclusion levels, unless two additional amino acids, valine and isoleucine, were supplemented. These amino acids are not as economically priced as the other amino acids supplemented, but if this were to change, Leeson said it would be possible to feed at these low rates of CP, which would further reduce ammonia output.

Overall, they calculated that by using a diet of 14.5 per cent CP, adequate performance could be sustained (although rate of lay was slightly lower than the current average of a commercially raised Lohmann bird), and ammonia efflux to the atmosphere could be reduced by 400 kg/100,000 layers per year.

Leeson also noted another important fact regarding ammonia emission – that as the amount of nitrogen in the diet increases, so does water intake by the birds. If we have to start paying more for water, or its use is restricted in the future, water will become an even more important driver to reduce ammonia, he said.

What about GHGs?
When considering what’s going into the air from a poultry operation, one must also consider the possible effect on climate change. That’s what Dr. Adrian Williams at the Centre for Environmental Risks and Futures at Cranfield University in the United Kingdom is trying to do. Research Day opened with a presentation on Cranfield’s work for the Department for Environment, Food and Rural Affairs (DEFRA) that examined the environmental impacts of 10 agricultural commodities (livestock and crop) using a Life Cycle Assessment (LCA). He presented the poultry portion of this work.

LCA is an objective process that evaluates the total environmental burden associated with a product, accounting for all inputs and outputs, from farm gate to processing, distribution, purchase and consumption.

The Cranfield study found poultry is the most “environmentally-friendly” of livestock sectors studied, having the lowest greenhouse gas (GHG) emissions, from primarily methane and CO2, due to increased feed efficiencies and rate of growth. The Cranfield study, however, also looked at global warming potential (GWP), which not only reflected the effect of methane and CO2, but also of eutrophication and acidification. These are both related to nitrogen of which poultry is a contributor via feed, manure, and fertilizer used on land to grow feed crops. GWP is also affected by the type of gases produced by energy consumption.

The study found that overall there was no significant difference in the GWP between the poultry systems examined (layers versus broilers, and organic versus conventional). However, feed was the dominant environmental “burden” due to the amount of land and fertilizer application required, and the resulting ammonia output.

However, an interesting finding in the study was that the energy required to raise organic poultry and eggs was increased by 30 and 15 per cent, respectively, compared to conventional systems. This was in contrast to other livestock systems, where a decreased use in energy was observed for organic systems. Williams noted that, although less energy is required to make organic feeds, the poorer bird performance and subsequent increase in feed consumption offset any energy gains.