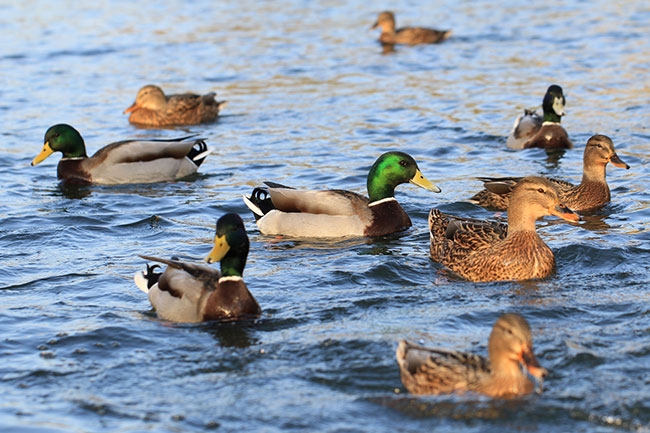 USDA scientists have been studying avian flu viruses to determine which birds are most susceptible to them. Mallard ducks are highly vulnerable to the virus. They are not visibly sick when they are infected, but they do emit viruses so can contribute to its spread.

The H5 bird flu viruses crossing North America may be around for a while, avian influenza experts warn.

The nesting season, which will see wild birds converge on breeding grounds in Northern Canada and Alaska, could further spread the virus in wild bird populations, and produce a new wave of outbreaks in poultry operations when the birds fly south in the fall, they suggested in late April.

“So if the viruses weren’t there to begin with, there’s a good bet that these wild birds will migrate north and bring those viruses there again, and then potentially see a second wave of reintroduction,’’ said Dr. Tom DeLiberto, assistant director of the national wildlife research centre of the U.S. Department of Agriculture’s animal and plant health inspection service.

It’s not completely clear what route the highly pathogenic H5 viruses took to get to North America, though the suspicion is that infected wild birds brought this family of Asian bird flu viruses to North America, perhaps through northern Russia and Alaska.

The first spotted was an H5N8, a virus which emerged in China a few years ago. It later swapped genes with North American bird flu viruses, creating H5N2 and H5N1 hybrids.

The H5N2 virus was first seen in British Columbia’s Fraser Valley last December, where it triggered a large outbreak across a number of poultry operations. Since then the virus has been found in multiple U.S. states and (at press time) three Ontario poultry farms, two housing turkeys and one broiler breeders.  All the farms are located in Oxford County and prompted the Canadian Food Inspection Agency to impose two separate control zones within the county.

USDA scientists have been studying these viruses to determine which birds are most susceptible to them. Dr. David Swayne, director of the southeast poultry research laboratory at Athens, Ga., said wild mallard ducks are highly vulnerable to the virus. They are not visibly sick when they are infected, he said, but they do emit viruses so can contribute to its spread.

Other birds — non-aquatic birds like hawks, falcons and eagles — appear also to be vulnerable, but in them infection is fatal, said DeLiberto.

These viruses have been found in birds in three of North America’s four flyways — the Pacific, the Central and the Mississippi flyways. The only unaffected flyway so far is the Atlantic, but experts appear to feel the virus’s appearance there is only a matter of time.

These viruses are descendents of the Asian H5N1 bird flu virus that has killed millions of poultry in Southeast Asia, Egypt and places in between since late 2003.

As well at least 784 people in 16 countries are known to have been infected with H5N1 viruses since 2003 and 429 of them have died. There have been no known human infections with the H5N2 virus to date.

H5N1 has caused major economic losses in Asia, and while H5N2 is clearly a threat to poultry operations in North America, experts are not predicting the same level of devastation here.

“I would not expect, even if we do see the virus returning in the fall, that we would see the kinds of problems that Southeast Asia has had,’’ said Dr. T.J. Myers, associate deputy administrator for veterinary services with the USDA animal and plant health inspection service.

He pointed to the fact that commercial poultry production in North America is different from poultry farming in Asia, and operations have extensive biosecurity measures in place.

That said, he acknowledged investigations are will underway to try to figure out how H5N2 has managed to make its way into commercial poultry operations in North America, despite the biosecurity precautions.

In Ontario, in an effort to prevent the virus from spreading during cooler weather, the Feather Board Command Centre (FBCC)  issued a warning in April to producers on the importance of minimizing the risk of introducing fecal material from wild birds into their poultry operations, particularly during planting season. The FBCC warned that tilling and planting equipment “cover every inch of fields that may have been contaminated by wild birds” and should be kept away from poultry barns and from driveways serving poultry premises.

The FBCC and the Ontario poultry marketing boards also advised producer members not to attend any meetings, which resulted in the cancellation of the London Poultry Show (this was scheduled to be held at the Western Fairgrounds April 22 and 23), and two events hosted by the Poultry Industry Council (PIC): Research Day (scheduled for May 6) and Health Day (scheduled for June 13), both of which were to be held in Guelph.