By Kimberly Sheppard Research Co-ordinator  May 2, 2012 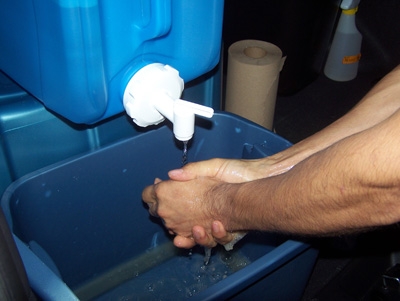 Hand sanitizing is extremely important to prevent the spread of pathogens — be it from person to person or from farm to farm.  But, are all sanitizing methods created equal? Are the convenient alcohol-based gels and wipes as good as (or better than) good old soap and water? Or are they best used in combination? This question is especially relevant to catching crew members, who can heavily contaminate their hands with organic material, then act as mechanical vectors spreading diseases between farms. Hand hygiene is also important to prevent zoonotic agent contamination such as Escherichia coli O157 and Salmonella enteritidis for which health consequences can be serious.

Many studies in human medicine tend to make hand rub with a disinfecting gel a standard for hand hygiene. However, few studies have tested the effectiveness of hand hygiene products on visibly contaminated hands. Dr. Jean-Pierre Vaillancourt and his research team at the University of Montreal have been evaluating the effectiveness of practical hand sanitization protocols: soap and water, degreasing cream, and hand wipes, all combined with alcohol-based hand gel. The use of alcohol-based gel alone was also evaluated. Thirty-two repetitions of each hand-washing protocol were done.

Reducing the level of hand contamination before using an alcohol-based gel seems important to ensure effective hand sanitation for highly and moderately contaminated hands. This can be done by using a degreasing cream or soap and water before applying an alcohol-based gel. However, based on the survey done during this study, catching crew members preferred using soap and warm water compared to a degreasing cream. For more information on this study, please visit www.poultryindustrycouncil.ca.

Enterococci are part of normal intestinal gut flora of animals and humans. Many studies have shown that enterococci from animal origin could represent an antimicrobial resistance genes reservoir for the human community. Little is known about the molecular antimicrobial resistance profiles from avian enterococci in Canada. Enterococci have numerous genetic elements that contribute to the dissemination of antimicrobial resistance traits that are mostly transferred by a highly efficient “pheromone-responsive” system. This system enables contact between donor cell and recipient cell during conjugation. In addition to reducing antimicrobial use, the poultry industry would benefit from new methods of prevention or reduction of spread of AMR.

Dr. Marie Archambault and her research team at the University of Montreal have been working toward providing evidence for the development of new tools to help the poultry industry prevent the emergence and spread of AMR. To this end, they have conducted a study to characterize the antimicrobial resistance determinants and investigate plasmid colocalization (presence of two substances in the same site) of tetracycline and macrolide genes in Enterococcus faecalis and Enterococcus faecium from broiler chicken and turkey flocks in Canada. This study also investigated new ways to reduce the transfer of antimicrobial resistance through interference in the pheromone-responsive conjugation. They hypothesized that the horizontal transfer of antimicrobial resistance in avian isolates of enterococci could be reduced using a polyclonal antiserum AS44-560.

One predominant multidrug-resistant phenotypic pattern was identified in both E. faecalis and E. faecium (bacitracin, erythromycin, tetracycline and tylosin). A significant reduction in the pheromone-responsive horizontal transfer of bacitracin resistance in E. faecalis could be achieved in vitro with a polyclonal anti-AS44-560.  Overall, results indicated that the intestinal enterococci of healthy poultry could be a reservoir for quinupristin-dalfopristin, bacitracin, tetracycline, and macrolide resistance genes. For more information on this study, please visit www.poultryindustrycouncil.ca.

It’s music to our ears when a producer tells us that he can’t wait for the next regional producer update, which we host with the Ontario Ministry of Agriculture, Food and Rural Affairs (OMAFRA) at various locations throughout Ontario.

The focus of the regional poultry producer updates is to bring producers and industry together to talk about current issues and provide a local forum for the exchange of information. Looking at attendance, we seem to have hit our stride with the last round of updates held in February. Thanks to all of our presenters who provided great information in a clear, concise manner peppered with real-life stories that we all could relate to.

Some highlights:
Crystal Mackay from Farm and Food Care Ontario spoke about the newly released poultry transport decision tree, “Should This Bird be Loaded?”, and why it was created and this led to a lively exchange of questions and answers.

Producers were able to pick up copies of the ”Should This Bird Be Loaded?” laminated information sheet, which is a quick reference guide that can be inserted in barn binders. A poster version of this guide (great for displaying on barn entrances), as well as a more detailed handbook were also available and were scooped up.

Bill Groot-Nibbelink, livestock regulatory affairs specialist with OMAFRA, gave an update on the pending deadline for certification of incinerators, and listed which companies are hoping to have their Environmental Technology Verification Program (ETV certificate) by March 27.

George Cornelissen shared his story of installing a geothermal unit (water furnace) on his property to heat his barns. George talked about the cost, installation and cost savings that he is now experiencing with this alternative heating system.

These days are run for producers and we rely on you for great ideas for speakers and topics.

We run regional think-tanks with producers to discuss what they would like to hear and all are welcome to attend. The more input into the planning sessions, the better the updates. So why not join us at one of those or if you have a topic you would like to share with others at a regional producer update please don’t hesitate to contact us for information on how to get it into the agenda. Phone the PIC at 519-837-0284 or e-mail pic@poultryindustrycouncil.ca.

The next round of updates will be held in November.