HatchCare in Canada: The update 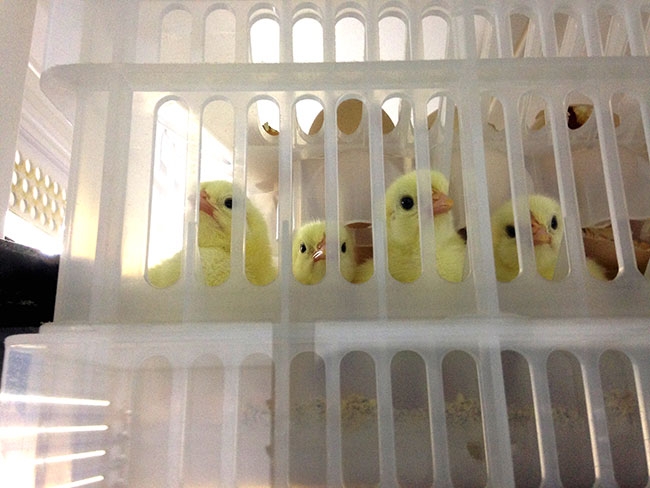 It’s been a year since Synergy Agri Group Ltd. (Synergy) in Port Williams, N.S. installed HatchCare – the first in Canada and the fourth company in the world to do so. And now, the company is currently producing 200,000 HatchCare broiler chicks a week.

HatchTech of the Netherlands developed its ‘HatchCare’ incubation and chick care system to better benefit chicks, the environment and poultry farmers. The company conducted years of testing on HatchCare before rolling it out to market in 2014. The total number of chicks now being reared under the system per year is over 680 million, in Australia, China, Europe, South America, the U.S. and Canada.

With HatchCare, the fertility of eggs is first checked using new lighting methods so that only 100 per cent viable embryos are incubated. Chicks are vaccinated while still in the egg.

In a standard hatchery, chicks are shipped after emergence and receive their first food and water after they settle in on the farm a day later. In the HatchCare system, chicks are immediately able to drink and feed, which  – several research studies have shown – results in higher body weight and breast meat yield. HatchTech also cites research findings showing HatchCare chicks to be 1 cm longer at hatch due to their incubation conditions.

HatchCare involves a unique and advanced handling system called HatchTraveller, where the chicks stay in small individual crates from hatching until delivery to the farm. The crates are then cleaned and disinfected for re-use. HatchTech representatives say this provides every chick with ongoing uniform conditions in terms of temperature, airflow and relative humidity. The highly energy-efficient HatchCare system also includes several features that enhance biosecurity, such as sealed incubators with filtered entry and exit air.

Synergy’s Experience
Doug Kaizer, Synergy’s chief financial officer, is very positive about their decision to go with HatchCare. “We were expecting improvements in chick health, mortality, weight gains and feed conversion, but we did not expect the large improvement in early farm brooding,” he notes. “The chicks arrive ready to grow. We use lower initial temperatures, put less feed out on paper and generally treat the chicks as if they are a couple of days older than their age. This has shown to be a tremendous help in the older barns, where it was harder to get the proper conditions for the day-old chicks.”

Kaizer says the system has also helped the company’s less-experienced barn managers. “The chicks aren’t as demanding, arrive with no hatchery infections and already have a built-in pattern for eating, drinking and resting,” he explains. “It has really levelled the playing field among different-aged facilities and experience levels of the farm operator.”

With HatchCare, Synergy has also been able to significantly lower antibiotic use. Before the installation, an average of over 20 per cent of flocks had to be treated due to issues from the breeder flock/hatchery. With HatchCare, to date that’s less than five per cent, and in most cases, Kaizer says, the reason for the treatment has been identified and the issue removed at the hatchery level. He adds that their HatchCare hatchery will be the key component in their move to RWA (raised without antibiotics) broiler production.

Biosecurity
In terms of biosecurity, Kaizer describes the system as “very” biosecure, partially because the entire setup – from egg delivery to chick delivery – takes place in areas isolated from each other, and because every process has built-in biosecurity aspects. “One of the best features is the ability to clean and disinfect after each batch of eggs and chicks are processed,” he says.

With respect to fluff filtering, Kaizer notes that within the HatchCare setup, their processing room (take-off room) is extremely clean and by using a special storage area, they have reduced the size of the hatchery. Kaizer says they are adding to HatchTraveller by designing their own transport trailer, which will enable chicks to have feed throughout delivery, regardless of time or distance to the farm. “All chicks stay in the same box where they are hatched and do not undergo any of the stresses in traditional hatcheries related to handling by humans or machines,” he says. “The goal is to have an almost seamless transition for the chick from hatch to barn under perfect conditions.”

On the energy efficiency front, Kaizer says it’s hard to make comparisons with their previous setup, as HatchCare systems are very automated and also require a lot of fresh air to maintain the perfect environment for the hatchlings. He believes they are just beginning to understand all the benefits of the system.

Continuous improvement
“Every aspect of the hatchery will see continued improvements over the next few months and years,” he notes. “We are working on specific incubation parameters for young and old breeder flocks as well as specific setups to enhance the hatchability and health of eggs kept over longer periods of time. Our hatching egg farms saw an immediate gain of four per cent hatchability, but we know that this can be improved by another two to three per cent with flock-specific incubation.”

“We are continuing to experiment and adjust growing procedures in the barn as well the feed inputs for the broiler rations,” Kaizer adds. “Basically, we are examining every single aspect from the hatching egg farm to live transport to the processing plant to see how things can be improved for the chicks with the HatchCare system. The possibilities are almost endless.”

Besides the initial cost of the system and needing to keep a good inventory of spare parts, the biggest drawback of the system in Kaizer’s view, is digesting the amount of information that’s becoming available and almost being overwhelmed by the number of future trials they want to do.

Facility tours
In the past year, Synergy has hosted a lot of interested people who want to look at HatchCare in action. This has included staff from hatchery companies all over North America, South America, Europe and Australia. “As we say to all who have toured our facility,” Kaizer notes, “This is not an easy or cheap hatchery, but it produces the best chicks for the broiler farmer. If your organization’s goals are focused on health, animal welfare and broiler performance, this system is for you. But if your goal is least-cost hatching, you are better to look at the traditional hatchery systems.” However, he believes anyone thinking of building a new hatchery has to consider animal welfare and be concerned with traditional hatchers that don’t allow newly-hatched chicks access to food and water for many hours or days. He says all personnel at Synergy firmly believe HatchCare is the future of hatching for both animal health and animal welfare reasons. “When this system was unveiled,” concludes Kaizer, “we actually stopped our hatchery construction and redesigned the entire project to allow for the HatchCare system. Looking back, this was the best decision our company has ever made.”

Return on investment
Asked about the return-on-investment timeline, Kaizer says that as an integrated system, when they add the profitability of the hatching egg farms and broiler farms to the hatchery profits, they are very satisfied with the rate of return. “Our customers [farmers and shareholders] not only benefit financially, but take great pride in knowing that the chicks they grow are the healthiest and most humanely-hatched chicks in North America,” he says. “There is no better return as a farmer than when you go home each day and can tell your ten year-old daughter that we hatch the healthiest, happiest chicks in the
entire world.”