Revolutionary care from day one 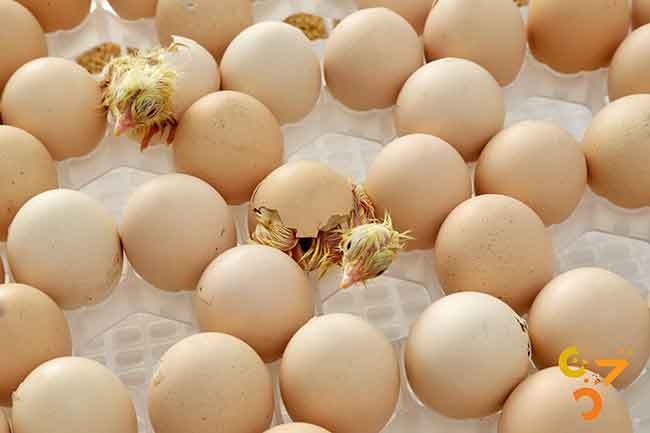 Improving hatchery conditions can result in a more robust chick

With all their automated controls, sensors and so much more, today’s hatcheries, packing houses, grading facilities and on-farm barns are quite high-tech. But HatchTech of the Netherlands has taken hatchery technology to a whole new level with its ‘HatchCare’ incubation and chick care system, to the benefit of chicks, the environment and poultry farmers. Synergy Agri Group (based in Port Williams, Nova Scotia) recently installed HatchCare – the first in Canada and the fourth company in the world to do so. Erik Helmink of HatchTech says the firm is currently producing 200 000 HatchCare broiler chicks a week.

Let’s look at how HatchCare is different by first briefly describing a standard hatchery, where chicks are shipped away after emergence and receive their first food and water after they settle in on the farm – a day later. With HatchCare, firstly the fertility of eggs is checked using new lighting methods so that only 100 per cent viable embryos are incubated. Chicks are vaccinated while still in the egg. Once hatched, chicks are immediately able to have a drink and a feed, which research has shown results in higher body weight and breast meat yield in male broilers. HatchTech also cites research findings showing HatchCare chicks to be one centimetre longer at hatch, which Helmink says is due to “laminair air flow.”

HatchCare also involves a unique and advanced handling system called HatchTraveller, where the chicks stay in small individual crates from hatching until delivery to the farm. The crates are then cleaned and disinfected for
re-use. Helmink says HatchTraveller gives every chick perfect, uniform conditions in terms of temperature, air flow and relative humidity, “like they stay in the hatcher.”

HatchCare also includes several features that enhance bio-security, such as sealed incubators with filtered entry and exit air. Over 95 per cent of fluff is removed from the air before it leaves the hatchery, eliminating the need for a fluff room and reducing the amount of space needed in a hatchery by about 20 per cent.

In terms of energy efficiency, the systems’ insulation levels are very high (Helmink says its insulation value is up to 70 per cent higher than traditional Styrofoam), and its direct-drive motors with sensor-controlled speeds use less power. Anodized water-filled aluminum radiators with very large surface areas reduce heat-up time during startup and cool effectively when needed.

Incubation conditions
Doug Korver has done research showing that incubation temperatures for egg embryos may need to be adjusted depending on the age of the broiler breeder flock and the strain of bird. We asked the professor in the department of Agricultural, Food & Nutritional Science at University of Alberta whether a system like HatchCare would be useful in making these adjustments, compared to previous hatchery system models or current competitor models.

“Single-stage incubation definitely makes it easier to manage conditions to more closely match the requirements for eggs from a particular breeder flock or age or egg size,” he replied. From that standpoint, Korver can’t say that the HatchTech system is any better or worse than any other single-stage incubator, but he notes that “potentially, the benefits of this system are that the chicks will have access to fed and water immediately after hatching. This would increase early intestinal development and potentially reduce stress and susceptibility to disease, while also increasing early growth rate. I think this is the biggest potential advantage of this system over other single-stage systems, and would be additive to the benefits over multi-stage incubation.”

Korver cautions however, that depending on how large the system is and how many different breeder flocks supply a HatchCare system, “some of the same issues regarding variation in egg size (and therefore optimum incubation conditions) might remain…Even with single-stage incubation…mixing different breeder flock ages and/or sizes of eggs can make it difficult to provide the optimum conditions for each egg.”

HatchCare is born
HatchCare was introduced after years of development in 2014. The total number of chicks being reared under the system per year is now at 682 million. However, by the spring of 2016, more installations will be up and running in Australia, China, some European and south American countries, as well as the U.S. and Canada. In one of their hatcheries, Probroed & Sloot in the Netherlands is running five HatchCare systems with a capacity of 90 000 chicks each. This totals about 650 000 HatchCare chicks a week (Probroed & Sloot calls them ProCare chicks). The firm will have installed five more HatchCare systems by February 2016, so the company will be able to deliver more than a million Hatchcare chicks a week from that point onward.

Probroed & Sloot’s Edwin Paardekooper says his company began working with HatchTech in 2008 as a partner to help develop the new system (known as Hatchbrood at that point). In 2013, they did the first tests with eggs hatching in a hatcher with feed and water. “They have a lot of knowledge and we have a lot of technical knowledge so we worked closely together,” Paardekooper explains. “Two things are important about the system. Vitality of the chick/reducing antibiotics and animal welfare. For the first is the advantage of early feeding. It means the chicks are growing sooner and they are about 15 per cent heavier at poult. The other factor of importance is the care of the chicks. As soon as they hatch, they are able to drink and eat and then they have a nap. They are so quiet, comfortable and satisfied. It is impressive to see.”

Although the energy savings provided with HatchCare are also welcome, Paardekooper says it’s the improved
performance of chicks that made leaders at his company so supportive of the system. “In this part of Europe, it’s important to reduce the use of antibiotics, and to have high standards for animal welfare,” he explains. “HatchCare chicks are stronger and healthier at first and in their life at the farms. They are so comfortable and this is what convinced me. My opinion is that we are starting with totally new chicks. Our farmers only want chicks reared with this system. These chicks are going to teach us a lot about what chicks need.”