Features Layers Production
How Much Space is Enough? 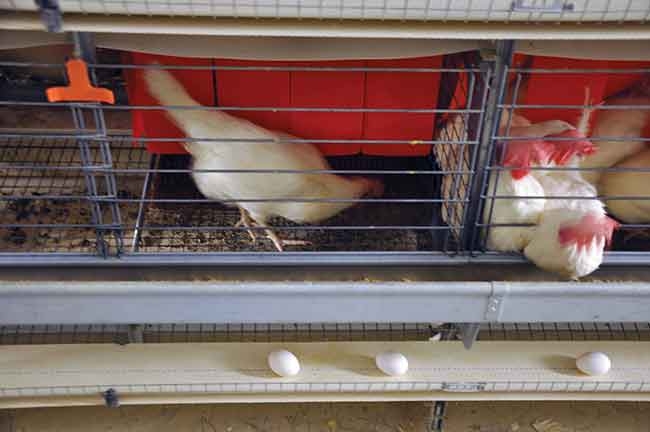 Dr. Tina Widowski concluded that while productivity and mortality were not influenced by space allowance, the differences in feather condition and foot health might be a reflection of compromised welfare of hens housed at the lower space allowance

Furnished cages support behaviours such as scratching, perching and nesting, but their design continues to evolve. Thirty years ago, the earliest models held fewer than 15 hens and allowed them access to dust baths or litter. These prototypes presented problems with hygiene and egg collection, with scratch mats now being the norm. The size of the furnished cages has changed too – some of the newest models now house groups as large as 100 hens.

How does the performance and welfare of the hens respond to higher stocking densities?

“This research is some of the first ever to assess the welfare of hens housed in large furnished cages of different sizes and space allowances using measures of production, health and body condition,” said Widowski. “At any given space allowance hens in these larger groups have more total space available to them and more ‘free space’ since they tend to cluster together at different times of day leaving some parts of the cage largely unoccupied.”

The cages were populated with 80 (high density) or 55 (low density) birds in the larger cages and 40 or 28 birds in the smaller cages. This allowed for a stocking space allowance of either 520 cm2 ( approximately 80 in2, high density) or 748 cm2 (approximately 116 in2, low density) per hen.  The European Union standard is 750 cm2/hen; a reference population in conventional cages was used for comparison at 465 cm2 (72 in2)/hen.

Furnishings included curtained nest boxes, claw shorteners, two linear feeders, nipple drinkers and a smooth plastic scratch mat where a small amount of feed (20g) was distributed several times per day. Perch allowances and nesting areas were proportionally sized for the cages and the hens were given feed and water ad libitum.

Egg quality was monitored continuously over the 50 weeks of the trial and egg quality was assessed every four weeks to provide an indication of shell strength. Hens were randomly selected for individual body weight measurements at 30, 50, 60 and 70 weeks of age, at which time they were also scored for overall cleanliness, feather condition, as well as keel, toe and foot damage health.  At the end of the trial 10 per cent of the birds were assessed post-mortem for bone strength.

Overall the results indicate that most measures of productivity were not affected by the parameters of the trial. Hen day egg production, egg weight and eggshell deformation were not affected by cage size while there was slightly greater egg deformity (weaker shells) at 57 weeks of age in low space allowance.

Mortality was lower in conventional cages than any of the furnished cages (4.6 per cent vs. 2.0 per cent), unaffected by cage size. The majority of mortality occurred early in the study, due to injury or entrapment, while both birds and researchers adjusted to the new systems.

Hens in large cages were the cleanest, possibly explained by cage design – the large cages were fitted with a wire partition over the scratch mat area that kept them from roosting and defecating there – or simply that higher density resulted in closer contact.

The only unexpected result was that hens in small furnished cages consumed significantly higher amounts of feed compared to large furnished cages, a result that Widowski explained may be due to the difficulty in gathering feed intake data and possibly greater feed wastage with this experimental design.

Widowski concluded that while productivity and mortality were not influenced by space allowance, the differences in feather condition and foot health might be a reflection of compromised welfare of hens housed at the lower space allowance. Given current research results of this study and a comparable research project at Michigan State University, she suggests a cage space allowance of at least 581 cm2 (90 in2) per hen would be considered appropriate for maintaining the physical measures of welfare quality specifically for the white laying hens used in this study.

This research was supported by OMAFRA and Egg Farmers of Canada with in-kind contribution of Farmer Automatic Cages from Clark AG Systems.