Hudson and Janzen Named to Ontario Agriculture Hall of Fame 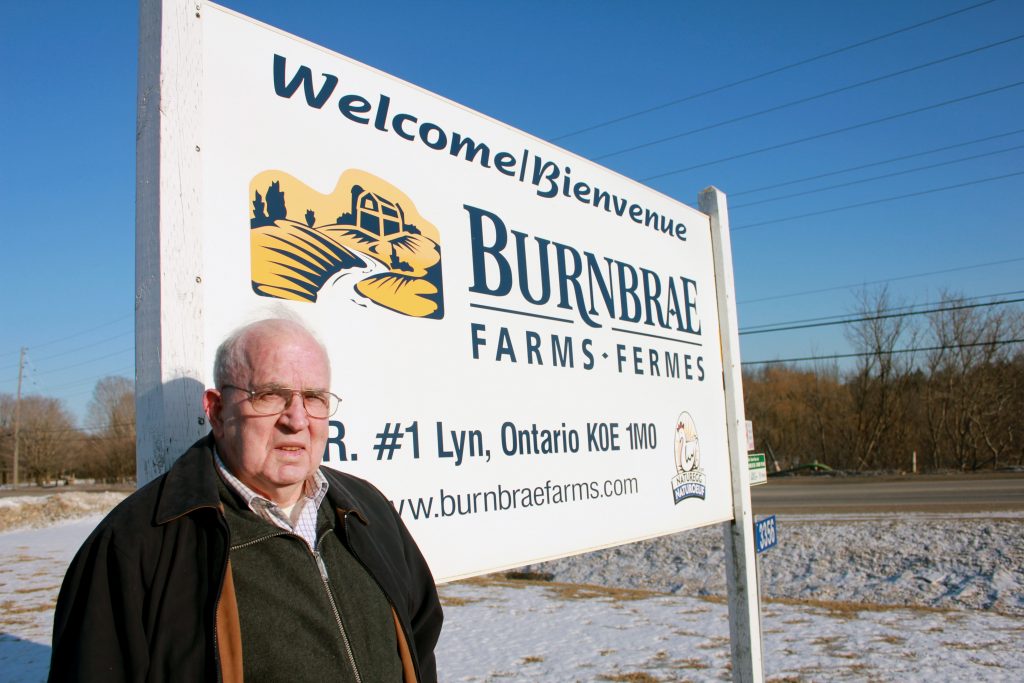 March 16, 2012 – Poultry pioneers Joe Hudson, CEO of Burnbrae Farms Ltd. and John E. Janzen, a champion for the creation of a marketing board for Ontario chicken, will be recognized for their contributions, along with three other inductees, at the Hall of Fame Gallery, Country Heritage Park in Milton, Ontario June 10, 2012.

Sponsored by the Egg Farmers of Ontario, Mr. Hudson has been at the helm of Canada’s largest integrated producer and marketer of egg and egg products for more than 60 years.

“Joe and his family are a truly remarkable example of a multi-generational farm family that have always been at the forefront of change in the egg industry,” says Carolynne Griffith, Chair, Egg Farmers of Ontario. “Starting with a small backyard flock as a school project and developing the business into what it is today is an outstanding accomplishment. To be recognized by the Ontario Agricultural Hall of Fame for his leadership, vision and commitment to the industry is well deserved.”

Hudson’s accomplishments are strong and significant in Ontario, and Canadian, agriculture. He’s been instrumental in planning and guiding Burnbrae Farms to its current position as a major influence in the Canadian egg industry. From the first laying barn built in Lyn, Ontario in 1952, to the establishment of layer hen, grading and breaking operations across Canada, Hudson has helped guide the family-owned and operated business to be recognized as the only company with vertically integrated egg operations throughout Canada.

“We are all truly proud of this special recognition and place in agricultural history that has been given to Dad,” says daughter Margaret Hudson, president, Burnbrae Farms. Margaret, along with her brother Ted, other family members and senior executives, manage all day-to-day operations of Burnbrae Farms. “Our father has carried on the strong family tradition that his grandfather set in motion when he came to Canada from Scotland in the late 1800s, and led the business through continuous improvements and vertical integration.”

For 31 years, Hudson served as a director of the Ontario Egg Producers (now Egg Farmers of Ontario). He has consistently supported egg-related research at the University of Guelph, and serves as chair of the Hudson-Burnbrae Foundation that provides financial support to education and charitable organizations in Eastern Ontario. In 2001, Hudson was a recipient of the Golden Pencil Award, and in 2007 he was inducted into the “We Care Hall of Fame” – these are two very prestigious awards in the Canadian food industry.

Sponsored by the Chicken Farmers of Ontario, John E. Janzen worked relentlessly throughout his career to transform the Ontario and Canadian chicken production and marketing system. His efforts improved the quality, marketability and profitability of chicken and identified new growth opportunities for the chicken industry.

By the late 1950’s Ontario’s chicken producers and processors faced devastating financial losses. Overconstruction, over-production and a total lack of collective planning brought the industry to a near collapse. Seeing these challenges, John joined the voluntary Ontario Broiler Growers Association to campaign for a marketing board to regulate Ontario production. He and others eventually convinced William Stewart to grant Ontario chicken producers the legal authority to become a self-regulated marketing body. In 1965 the Ontario Broiler Chicken Producers Marketing Board became a reality and John Janzen became its first Secretary Manager, a post he held for 23 years. Within the first year, the Board slowed production increases so they better matched consumer demand, and established a precedent of supply management for other commodities including turkey and eggs. John and the Board subsequently developed policies and regulatory procedures to ensure that all chicken producers were registered and allotted quarterly marketing crop quotas. They identified new growth opportunities including large restaurant chains such as Kentucky Fried Chicken.

Once supply management was established in Ontario, John Janzen and his Board realized that unless all the provinces implemented similar legislation, then Ontario’s system was at risk. Furthermore, they were aware of what was happening in the U.S. where chicken production was largely controlled by huge integrators such as feed manufacturers resulting in the demise of independent chicken farmers. For four years, John worked to sell the provincial marketing approach through the Canadian Broiler Council where he was the Secretary Treasurer. Once each of the provinces had established its own marketing board, then John and the Council encouraged Eugene Whelan to create a national agency to regulate inter-provincial movement and national chicken imports. In 1979, the Canadian Chicken Marketing Agency (now Chicken Farmers of Canada) was established. John Janzen was the interim Secretary Treasurer of the new Agency for the next year of transition.

John Janzen’s perseverance in the achievement of a supply managed approach to chicken production, which allowed a fair return to producers and top quality, affordable chicken to consumers, was a major contribution to both the Ontario and Canadian chicken industries and to the rural and provincial economies.