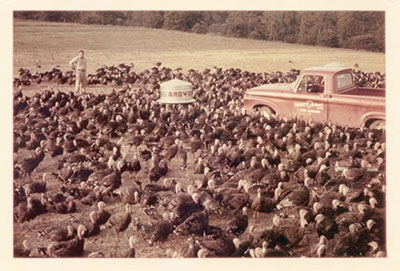 Bronze turkeys at the Shantz Farm, circa 1963. Hendrix Genetics

It was 1953, sixty years ago, when Earl Habel and Milo Shantz began raising turkeys in New Hamburg, Ont. That was when Queen Elizabeth II was crowned, Sir Edmund Hillary climbed Mount Everest, bread cost 16 cents a loaf and a gallon of milk was 94 cents.

By 1957 the farm had incorporated as Shantz Turkeys Ltd. In 1958, Earl Habel started his own growing business, leaving Milo, his brother Ross and their father,  Irvine, running the family operation. In 1966, Ralston Purina purchased the turkey breeding, growing and processing enterprise that by then consisted of three companies: Three Star Farms, Shantz Processing and Shantz Hatchery.

Hybrid Turkeys was a name that emerged in 1970 when the Shantz brothers bought back the breeding and growing enterprises. Ralston Purina retained the processing part of that turkey business which had been trading as Checkerboard Farms.

Ross Shantz, now 74, recalls the early days of the business, before further processing was introduced.

“Hybrid Turkeys entered into primary breeding and commercial growing of broiler type turkeys, as it was known at that time, seeing a consumer need when a local processor saw a market for year-round production of a five- to ten-pound table-ready whole bird.”

They needed to build a new turkey, but the genetics they needed for a smaller white bird with superior conformation that could be produced year-round were not available at that time.

Over the next 20 years, Hybrid Turkeys grew to be among the top three breeding companies in the world.

In 1981, Hybrid was sold to Euribrid, but the familiar Hybrid name continued. By the late 1980s Hybrid had become a major global player in turkey genetics with farms in Brazil and Hungary. Ross Shantz remained as president until 1986 and served on the board of directors until 1991.

Milo Shantz reached out beyond the turkey industry to actively promote the business community in St. Jacobs, Ont. He was recognized by Wilfrid Laurier University with an honorary doctorate of laws before he passed away in 2009.

In an address to employees at a 60th anniversary celebration held in June 2013, Dave Libertini, managing director of Hybrid Turkeys, predicted that the company’s future will be similar to the past, and will involve following the same strategy of listening to its customers and the market.

“As a survivor and with 60 years of wisdom, we also intend to look for new ways to deliver what the market wants and we will also look to influence the turkey sector so that it can grow and we can all prosper. The turkey business needs leaders and we think we can offer leadership.”

Ross Shantz also believes the secret of the success of Hybrid Turkeys over the last 60 years was listening to consumer market trends, as well as the needs of the company’s direct customers. He gratefully acknowledges the dedicated employees and consulting people they had worked with over the years.

“It is very humbling to see how an idea 60 years ago has turned into a major contributor to the poultry industry in the 21st century,” says Shantz. “Thanks, Hendrix Genetics and Hybrid employees for keeping the dream alive.”