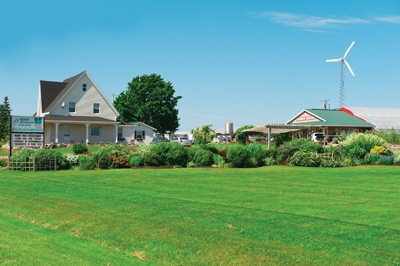 They have adopted farming practices that decreased their light, carbon and land management footprints, and in doing so have garnered national recognition as leaders in environmental farm practices.

As an example, they are using the manure from their 14,000-bird layer operation to fertilize their acres to grow corn.
The Simmonses also have entered the Alternative Land Use Services program and built berms and channels to control water runoff from their farms, which produce a diverse range of commodities, from eggs to sweet corn.

P.E.I. Power
They consider the constant wind on their Island home to be one of Prince Edward Island’s most valuable resources. Therefore, they bought a wind turbine in 2008 to provide green energy to the egg farm, garden centre, greenhouses and houses for their families.

Red Bridge Farms for egg production and Kool Breeze Farms for the garden centre and greenhouses, as well as their homes, were almost entirely self-sufficient in hydro during winter in the first few years, says Ian.

They needed only 720 kilowatts of purchased electricity from Dec. 15 to Jan. 14, and just 240 kilowatts from mid-November to Dec. 15 in 2008 and 2009, he says. Ian calculates that their first wind turbine should pay for itself within seven years, remarking, “since we now have a couple of years data collected; we can now see an approximate saving of $25 per day from our energy costs.”

He believes: “It is the cleanest energy you can produce. We have a lot of wind in P.E.I. and we should use our natural resources to the best of our ability.”

He hopes to add a second wind turbine to their farm later this year. “Hopefully, by December of 2012, we should be self-sufficient for power, or at least that is the goal,” he says. “We have expanded our operation over the past few years and need more power to meet our needs.”

A family affair
Ian and Doug are the third generation on the farmstead founded by their grandfather in 1900. They joined back in 1990 with their late father, Eldred, in a company they called Kool Breeze Farms. Their father was a mixed farmer with beef cattle, a few hens, hogs and crops.

They replaced the cattle with hogs, but in 2007 they stopped production and now concentrate on egg laying through Red Bridge Farms and their greenhouse operations at Kool Breeze Farms.

Although egg production provides a big contribution to their family enterprise, Ian Simmons admits that Kool Breeze Farms, with its 15 greenhouses, anchors their business.

The garden centre grew out of a small 12 foot x 16 foot greenhouse Ian started in the summer of 1986 to grow plants as a hobby, and it has continued to grow since then. Last year, they added a 15th greenhouse.

Doug, the older brother, started working full time on the farm in 1994, while Ian, 11 years later after managing a building supplies store, joined the farm full time in 1995.

The brothers have split up the work in their businesses in accordance with their talents and tastes. Ian handles administration, financial matters and marketing, while Doug oversees the daily farm work. Commenting on their business style, Ian observes: “We have a lot of discussions. Some people call them meetings.”

Their wives also are actively engaged in the farms; Doug’s wife, Christine, helps in the garden centre, while Ian’s wife, Tammy, does the bookkeeping. In addition to the Simmons families, Red Bridge and Kool Breeze Farms employ 12 people.

“Everybody is going to say I am crazy,” he laughs.

Supply and demand
The Simmons brothers plan to approach the future with the environment in mind. “People want a more green type of product,” says Ian.

Regarding the future of the Canadian egg industry, Ian thinks its biggest challenge could be the World trade Organization negotiations that threaten the Canadian supply management system.

“If that is lost; egg farmers will be asking the government for handouts like other non-supply managed commodities, which is something I don’t want to do.”

As members of the Prince Edward Island Federation of Agriculture and the Summerside Chamber of Commerce, Ian says that the business philosophy of Red Bridge and Kool Breeze Farms is to give back to the community on a regular basis.

Every fall, Ian, Doug, their families and their employees sponsor a free community scarecrow contest with the help of their local suppliers and the local Lions Club.

“Families want things they can do together without it costing a lot of money. The annual scarecrow contest gives them just that opportunity. They can also take part in the People’s Choice Awards and vote for their favourite scarecrow or see how a panel of judges rate the live scarecrows.”

In 2010, the Simmonses also teamed up with the Harbourfront Theatre to present a dramatic thriller in the Kool Breeze Farms cornfield as a fundraiser for the local theatre.

The brothers have been farming for decades, and show no sign of slowing down. Whatever they are doing, they are certainly setting the stage for many years of successful farming with family.