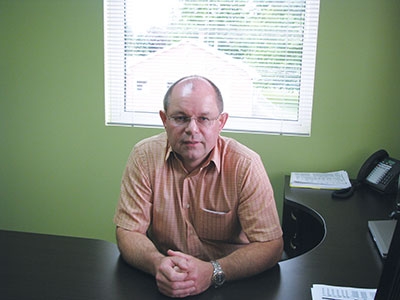 As one of the most senior leaders of the Nova Scotia poultry industry, Ian Blenkharn has been largely responsible for piloting the industry through some very stormy seas during the last five years.

In April 2007, when he was Chicken Farmers of Nova Scotia (CFNS) chairman, Blenkharn witnessed Maple Leaf Foods close its poultry processing plant in the Annapolis Valley.

Shortly thereafter, CFNS commissioned a study on the future of poultry processing in Nova Scotia, engaging Serecon Consulting of Alberta. The latter reported to CFNS in March 2008 that Nova Scotia needed only one processing plant, not two; and Blenkharn says that the report was derived from comprehensive consultations with farmers, feed mills and processors.

By that time, the second Nova Scotia poultry processor, ACA Cooperative, was struggling in financial heavy weather, reporting a loss of $6 million at its primary processing plant in New Minas and another $1.6-million loss at its Eastern Protein chicken wings and nuggets plant in nearby Kentville.

“Given that Willowdale Farms was a major supplier to ACA, I ran for the board. I was elected at their annual meeting and that same day I was elected chairman of the board of ACA,” he recalls.

After resigning as CFNS chairman, Blenkharn began picking up the pieces at ACA. “Through June, July and August, I took the lead in further investigating joint ventures with another processing plant . . . we talked to numerous processing plants across the country.”

In September 2008, the ACA organized a meeting of all Nova Scotia poultry farmers, those that shipped to ACA and those that didn’t, says Blenkharn. “What we proposed at that meeting was a 50/50 company with Maple Lodge Farms of Brampton, Ont., and Nova Scotia Poultry producers.”

The majority of poultry farmers at that meeting voted in favour of the strategy, he says, and a steering committee, later known as the Nova Scotia Poultry Industry Strategic Planning Committee was then formed.

The committee was composed of Nova Scotia chicken and turkey farmers who shipped to ACA (or, if they had previously shipped to Maple Leaf’s Canard facility, were currently shipping to Nadeau Poultry in Madawaska, N.B.).

The steering committee then worked with ACA and Maple Lodge to create Eden Valley Poultry Ltd., which was owned 50/50 by Maple Lodge Holdings and the poultry producers, ultimately known as United Poultry Producers Inc.

When the incumbent CEO of ACA left in November 2008, the co-operative’s directors asked Blenkharn to take over and he quickly looked at why ACA had previously lost so much money in those past few years.

He recalls, “With Maple Lodge we looked at the options to stop losses and make ACA profitable.”

In late January 2009, the ACA board concluded that Eastern Protein had to be closed permanently and the primary plant in New Minas needed to scale back its packing room operations as the cut and pack plant was old and inefficient.

After Blenkharn announced the ACA job cuts in June 2008, employee numbers fell from over 600 to just over 300.

“It was important to Maple Lodge as a potential 50 per cent partner as they wanted to see that a processing plant could be profitable and the work force supportive of a viable processing plant in the province,” he says.

In the fall of 2009, Blenkharn monitored ACA’s cash flow and decided that further changes were needed in New Minas. “On Dec. 1, 2009, I announced further layoffs at New Minas as the plant cut back its packing room operations and it became a very simplified kill and chill operation.”

He continues: “At that point 130 jobs were lost. That took us down to about 160 – but from that point forward, the co-op had good financial results.”

By the spring of 2010, ACA was making good, regular profits, says Blenkharn, and from that committee he chaired the United Poultry Producers – consisting of 82 Nova Scotia poultry producers and seven Prince Edward Island producers – on whose board he also became a director.

When it became evident in early 2010 that ACA could become sustainable, and knowing its poultry processing division would close when Eden Valley Poultry began operation, Blenkharn says that ACA’s board and management concluded it would be wise to convert the farmer-owned co-operative to an incorporated company, Atlantic Poultry Inc.

At this point, he notes, all of ACA’s divisions were still running – the primary processing plant, egg grading station, hatchery and feed mill.

ACA also had 50 per cent ownership of Country Ribbon in Newfoundland-Labrador, a poultry processor which also produced 100 per cent of chickens raised in the island province, two-thirds in its corporate barns and the remainder by contract producers.

Atlantic Poultry has its own corporate laying barns (which, along with its producer-shareholders, supplies eggs for grading). It also supplies fertile hatching eggs to hatcheries.

When the steering committee learned in November 2010 that Maple Leaf Foods planned to close its packing plant in Berwick, N.S., it negotiated a deal with Maple Leaf to buy the plant, as it was a better retrofit option than any of several remaining candidates for a plant location, including the former Eastern Protein facility, says Blenkharn.

The first attempt to draft a business plan for the new poultry processing joint venture did not attract enough support from Nova Scotia poultry farmers, so P.E.I. poultry producers were invited to support Eden Valley. With that, the second business plan now had enough support to convince chicken and turkey producers to commit their birds and investments to the new joint venture.

The Eden Valley joint partners took possession of the Maple Leaf plant on April 29, 2011, beginning renovations on May 1 and completing them on Oct. 3, 2012, opening as Eden Valley Poultry Ltd. On Oct. 5, 2012, a total of 100 employees transferred from Atlantic Poultry, which had closed its primary processing plant two days prior.

Blenkharn observes that there were 70 workers remaining at Atlantic Poultry, adding that the company “is now after more growth opportunities for the benefit of its shareholders.”

Last year, he resigned as one of the United Poultry Producers directors on the Eden Valley board, but after the new joint venture had a challenging startup through the fall of 2012 and into the spring of 2013, the Eden Valley board asked him back to take over as interim president, following the incumbent president’s departure in late November 2012.

It’s clear that Blenkharn, who graduated in 1986 from the Nova Scotia Agricultural College with a degree in agricultural economics, has the credentials and demonstrated experience to turn around a company in crisis.

After 15 years of banking experience in Alberta and the four Atlantic Provinces, he left banking and established an agricultural consulting firm doing financial planning and business plans for farmers. That lasted for about five years until 2003, when he was asked to run for the Chicken Farmers of Nova Scotia Board. Shortly after that, he was made its chairman.

Currently, Blenkharn is also president and CEO of Atlantic Poultry, as well as a partner and chief financial officer in Willowdale Farms with Dave and Mitch Fillmore producing broiler chickens, hatchery eggs and mink.