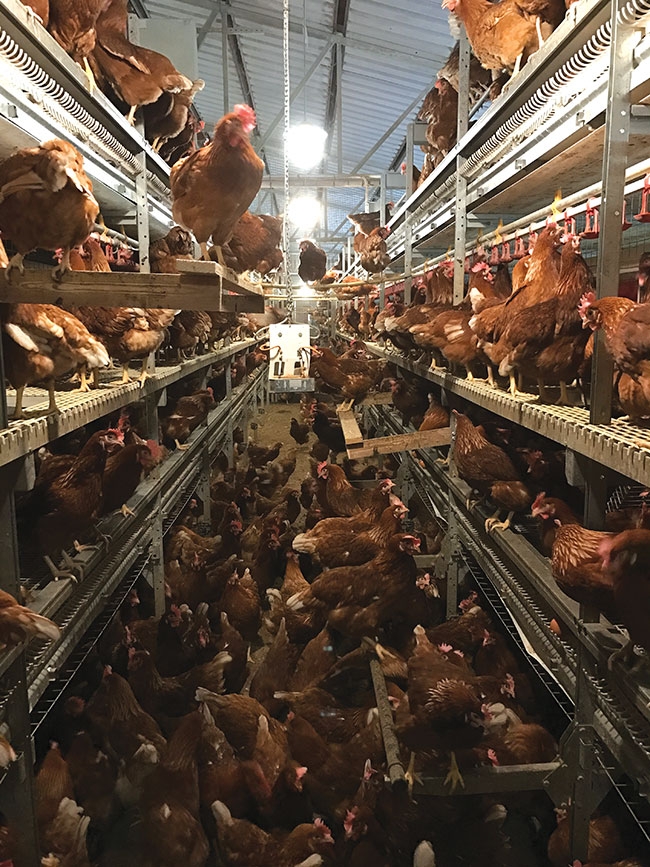 In aviary aisles, LEDs should be used in broad distribution to evenly light the floor. PHOTO: Hy-Line International

More poultry producers are switching to LED lights in their layer barns for the power savings, versatility, durability and brightness they offer in comparison to all other options. Lighting is important in broiler, turkey, pullet and layer production, but especially important in egg production these days because of the new systems hens are being housed in. It’s all about making sure, in these new housing set-ups, that egg laying in the nest boxes is maximized.

With that aim in mind, lighting goals for all the new layer housing systems options are similar – keep it even, keep the nest boxes fairly dark, and keep corners, walls and feed/water sources bright. But while these objectives apply for all types of lighting, installation of LEDs require some new thinking.

“As LEDs are being phased in, producers need assistance with figuring out what intensity on the controller is actually producing the illumination level desired,” notes Sarah Pelissero, a sales and service provider with McKinley Hatchery in St. Mary’s, Ont., who spends a great deal of time providing layer lighting consultation.

Something Pelissero says producers have to get used to with LEDs is new numbers. That is, the brightness that would have been provided with compact fluorescent lights at a controller reading of 100 per cent might be 50 or 60 lux, but the same controller reading with LED lights could provide 100 or 150 lux, depending on the bulb being used.

Producers should also keep in mind that because LEDs don’t draw as much power, lighting arrangements that may have used multiple controllers/slaves to provide enough power for incandescents may offer too much power for LEDs. “For example, a system with four rows of lights may have had two rows per controller/slave, whereas with LED bulbs, one slave/controller could be used, depending on the setup and power load,” Pelissero explains. “Having too much power going to the LEDs makes it difficult to dim the bulbs properly, as there is less resistance on the line. This can be managed with the help of a good electrician.”

Specifics for various housing systems
In terms of LED use in aviaries, Ian Rubinoff, technical services veterinarian with Hy-Line International, notes there are many different system brands that are all constructed a little differently.

He says most aviaries have at least four different sub-environments that must be considered in regards to lighting. In the aisles, LEDs should be used in broad distribution to evenly light the floor. Underneath the system, consistent lighting is also important to prevent laying. He adds some producers find using a colour spectrum different than the rest of the house is effective in keeping hens from laying there. Sufficient light is also important in feed and water line areas, especially at the beginning of the flock cycle. Lastly, nests should be the darkest area of the system.

“It is ideal if all four areas have their own controls and dimmers,” Rubinoff says. “Using lights going on and off at different times is a good way to help pull the birds onto the floor during the day and move them back into the system in the evening.”

Tanya Streifel, marketing manager at Minnesota-based lighting provider Once, agrees. “By dimming or increasing the intensity,” she says, “we are able to essentially tell the birds where to go within the system.”

In aviary aisles, LEDs should be used in broad distribution to evenly light the floor.

With regards to enriched colony systems, Pelissero notes that when this housing was new to the egg industry, LEDs were installed in the aisles in dropped fixtures from the ceiling. However, today, most colony housing has ‘in-system’ central LED tubes (a string of bulbs) in each tier. There are positives or negatives to both, she notes, but whether it’s aisle lighting or central tubes, the light must be even, with the nest area darkest and the scratch/perching areas brightest.

With in-system LED lighting, producers also need to make sure they are getting even lighting on each side of the cage area, she notes, and aisle lighting can be added to address this (or turned on when a worker is present if needed). “With aisle lights,” Pelissero adds, “you have the added factor of uniformity from top tier to bottom tier as well as along the row. Bulb placement and spacing is very important.”

In free-run houses, Rubinoff says that, depending on the width of the building, there will usually be two rows of lights on each side.

Pelissero notes that with LEDs in free-run barns it’s challenging getting the right intensity at bird height, at feeders and waterers, with no shadows or dark corners. Streifel echoes that sentiment. “Making sure that the corners have adequate light is especially important. Birds will quickly learn to like those dark corners, pile or lay floor eggs.”

No matter the housing system, Streifel emphasizes that using the correct light spectrum is very important. “Layers require a red-light spectrum, which can decrease time to peak production by stimulating ovulation via the release of reproduction-stimulating hormones and targeting sexual maturity,” she explains.

“The sunrise and sunset simulation [offered in our systems] eliminates the stress inputs of switching lights on and off abruptly, calming the birds and lowering stress and mortality while supporting immune response.

“It is recommended to incorporate scientifically tested photoperiods and light colour spectrums,” she concludes, “to achieve optimal results.”

However, Pelissero believes that LEDs generally don’t dim as well as conventional lighting systems do, so she says if you’re a producer who uses dimming of your lights as a management tool to calm birds, you’ll have to do some rethinking. “In our barn, we do use dimmers, just not as much as most do, only if necessary, and we also keep our barn brighter than many other egg producers,” she notes.

“I think my best advice overall is to realize every barn situation is unique. LED use is not cookie cutter. It’s about learning as we go and reading our birds.”