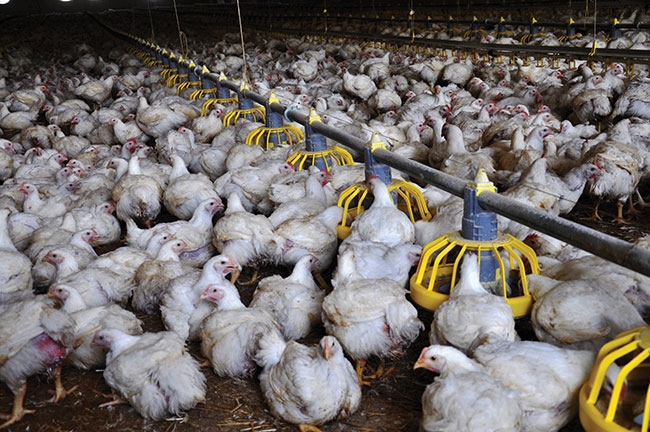 Chicken Farmers of Canada (CFC) has been developing an antimicrobial use reduction strategy policy, where the main goal is to eliminate the preventive use of medically important antibiotics in commercial broiler production.

So, how can producers optimize in-feed medication programs to get better flock performance and reduce gut health issues in the context of these upcoming changes? As per the CFC policy, the preventive use of Category II antibiotics will be eliminated by the end of 2018 (e.g., Virginiamycin, Tylosin).

CFC will assess the impact in 2019 with the goal of eliminating the preventive use of Category III antibiotics by the end of 2020. The only antibiotic in category III that is often used in broiler feed in the last few decades is Bacitracin for the prevention of Necrotic Enteritis (NE) caused by Clostridium perfringens (Cl.p).

Anticoccidial products that are mainly used to control coccidiosis in chickens. There are two main groups of such products.

i. The Ionophores are considered leaky anticoccidials, meaning they don’t eliminate all pathogenic Eimeria species (cause of coccidiosis) in birds and will allow some leakage so that immunity against coccidiosis can also be established. Because these products allow some leakage, they are not considered as strong as Non-Ionophore anticoccidials. However, development of immunity against coccidiosis and their modest antibiotic effect on Clostridium perfringens are their positive aspects. The Ionophores are considered non-medically important antibiotics (Category IV) and will not be subject to CFC policy. They will continue to be viable options for the poultry industry.

The Ionophores are subdivided into three distinct groups.

Non-Ionophore Coccidiostats (or so called “chemicals”) are stronger anticoccidials comparing to Ionophore products in controlling coccidiosis. The most common active ingredients that are available in Canada are:

Non-Ionophores don’t have any antibiotic effect and if they are not rested for proper duration between each cycle, they can develop resistance. Hence, their strategic use in feed medication program and proper rotation after each use will maximize their return on investment (ROI) and prevent development of resistance.

The time that it takes for a given chemical to develop resistance depends on multiple factors but their specific chemical structure (each product is structurally different), duration of use (number of consecutive broiler crops) without resting, the quantity of use in each crop (starter, grower or finisher) and proper rotation are the important areas to consider. Their main advantage over ionophores is their strong anticoccidial effect.

Combination Anticoccidial – Currently, there is one product in Canada that contains Narasin (monovalent Iono phore) plus Nicarbazin and is widely used in broiler medication programs

Anticoccidial products (ionophores or non-ionophores) can be used either as straight program in each broiler flock (from starter to finisher diets), or most commonly in shuttle form. In Canada, the most common approach has been in shuttle form, where a chemical is used in pre/starter diet followed by an ionophore in grower/finisher diets. This approach is more conservative, because ionophores are used in grower/finisher diets at critical time where coccidiosis cycling in each broiler flock peaks and because these products allow some leakage, it will not provide the most efficacious coccidia control. However, due to their antibiotic effect it will assist in prevention of NE in combination with in-feed antibiotics (such as bacitracin and Avilamycin).

Dynamics of coccidiosis in broiler flocks
There are three known Eimeria species that cause lesions in different parts of intestines of broiler chickens and negatively impact health and/or performance. These are Eimeria acervuline that mainly affects duodenum (first portion of intestine), Eimeria maxima (affects mid-gut) and Eimeria tenella (that affects solely the ceca of the bird). There are few other species that have been reported in broilers but their impact is not well described.

During the cycling of the Eimeria in the gut, it will replicate in the intestinal mucosal cells and eventually ruptures the cell, hence affecting the normal function of the gut. If the extent of lesions is significantly high, the result is clinical form of coccidiosis with elevated mortalities. This is more common with Eimeria tenella where producers experience elevated mortality and notice blood in litter. However, clinical cases of coccidiosis are only the tip of the iceberg.

In majority of cases with presence of anticoccidial products in feed, if these products are not properly rotated and less effective, or if barn environment is not ideal, we may face with subclinical coccidiosis with no apparent increased mortality. The result is poor performance, poor daily weight gain, higher FCR and less economic gain.

The most important consequence of subclinical Eimeria maxima in mid gut is predisposition of clinical or subclinical Necrotic Enteritis. Therefore, special attention should be to lower the cycling of E.maxima mainly from 24 to 30 days of age where it usually peaks.

In-feed antibiotics have essentially been used to prevent NE in broiler flocks. In Canada, the most common antibiotics that are typically used for prevention of NE in broiler ration are Bacitracin (category III), Tylosin and Virginiamycin (both are in Category II), Avilamycin (not currently categorized in Canada) and, to a much lesser extent, Penicillin (category II). Based on available data, Bacitracin is one of the most commonly used in-feed antibiotics and is the one subject to several research studies.

Mode of action of in-feed antibiotics
There are many strains of Clostridium perfringens (Cl.p) in broiler gut, but not all of them can cause disease. Studies have shown that healthier birds tend to have a more diverse population of Cl.p, while the intestines of birds affected by NE are populated by a single dominant strain of Cl.p. It is suggested that competition between non-pathogenic Cl.p subpopulations within the intestine may help to suppress virulent strains of Cl.P and thereby reduce the incidence of NE.

There are various proposed mechanisms of action by which in-feed antibiotics may improve performance. Mechanisms suggested include: sparing energy from tissue maintenance and metabolic requirements of gut microflora and diverting towards host growth, selectively inhibiting the growth of detrimental bacteria thereby reducing microbial metabolites which may depress growth, stimulating the growth of beneficial bacteria, and improving absorption of nutrients via reduction in mucosal thickness and other morphological changes that increase surface area for absorption.

What can be expected post full implementation of the policy and what can be done at the flock level?
If we expect that by 2021, use of medically important antibiotics in broiler ration is not allowed (Categories II and III), that will leave only one antibiotic that is currently not considered medically important (Avilamycin) and can continue to be used as prevention of NE.

Under this scenario, the main concern is, if this product is used in every crop and for long period, it may potentially lose its efficacy. This means that there is more possibility of gut health implications in broiler flocks.

There are three main possible gut implications:
Necrotic Enteritis (NE)- This condition can occur in the form of subclinical with no apparent elevated mortalities which can negatively affect performance of flocks with higher FCR and poor weight gain or it can progress to clinical form of necrotic enteritis with higher mortalities.

What strategies can mitigate the NE incidence and support gut health?
By far the most important strategy is to be able to optimize in-feed medication program to prevent coccidiosis and mainly E. maxima during the peak of its cycling in birds between 24 to 30 days of flock age. To accomplish this:

Feed companies need to assess the effectiveness of available Coccidiostats in Canada via various methods such as gut health monitoring by farm veterinarian between 24 to 30 days of age, conducting an Anti-coccidial Sensitivity Test (AST) every two years and proper rotation of products based on their mode of action and their effectiveness on each of three mentioned Eimeria species.

Some anticoccidial products are stronger on Eimeria acervuline and weaker on E.maxima and/or E.tenella and more suitable for starter feed, while there are others that are more effective on E.maxima and/or E.tenella and you can get the best result if being used in grower and/or finisher diets. This is because E.acervuline peaks earlier than E.maxima , and E.tenella peaks the last in a given broiler cycle. This strategic approach demands a shift in our traditional use of products, where a non-Ionophore product was usually used in starter feed followed by an Ionophore in the grower and finisher feed.

The key aspect of reducing the negative impact on gut health is to be able to diagnose presence of NE in a flock in its early stage. Treatment is defined as “The use of antibiotics to treat a clinical or subclinical disease (metaphylaxis use) in animals, including the mass medication of flocks of birds in which a subset of birds are identified with a clinical or sub-clinical disease”.

Those broiler producers that experience recurring cases of Necrotic Enteritis on their consecutive flocks, in co-ordination with their veterinarian and/or feed company team, should assess the gut health during the critical period of 24 to 30 days of age. If their veterinarian checks the gut health on randomly selected birds and determines that there is a subclinical NE or dysbacteriosis, they can immediately initiate treatment in water or in feed. This will assist in minimizing the risk of clinical NE and mitigate the lingering negative effect of subclinical NE on performance.

Currently there is no alternative product that can exactly replace in-feed antibiotics with the same level of efficacy. Having said that, in my opinion, some of the alternative products can have a synergistic effect with anticoccidial products or may indirectly show antibacterial benefits. There is a need to run on-going field trials by nutritionists to identify products that are promising in providing support to control coccidiosis and better gut microbial balance and less prone to subclinical NE.

In conclusion, in my opinion, a robust relationship between producers, their veterinarian and feed company sales/technical team within the context explained above, is the most important strategy to minimize negative impact on reduction/elimination of preventive use of in-feed antibiotics. This is followed by a shift in our traditional application of anticoccidial products to control coccidiosis in broilers based on science and efficacy of each product and strategic application of alternative products.

Related
Utilizing vaccines to reduce antimicrobial use
Ask a Vet: Understanding coccidiosis
A new era of antibiotics use
Do you have questions about poultry health?
Editors’ Picks
Digital Edition