Researchers look to give broilers a head start on gut health 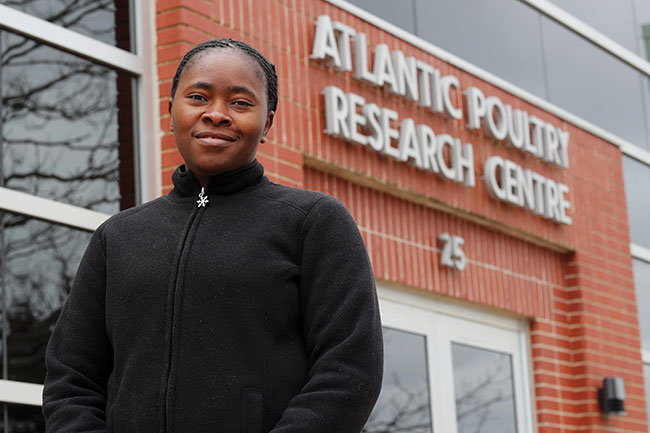 Researchers around the world continue investigating antibiotic alternatives. It’s part of a search for new options producers can use to promote efficient growth in broilers. Deborah Adewole is looking at probiotics as one alternative, and the route of administration that maximizes efficacy.

Probiotics are live microorganisms designed to create a more favourable microflora in the gut. They are commercially available in Canada and usually added to the bird’s diet in the feed. “One of the challenges we find with adding probiotics to feed is that the high temperatures used in feed processing can reduce the activity and efficacy of probiotics,” says Adewole, assistant professor and Industry Research Chair, Poultry in the Department of Animal Science and Aquaculture at Dalhousie University in Truro, N.S.

In 2019, Adewole and her research team began investigating the administration of probiotics before hatch to determine what the benefits might be to bird performance and intestinal health. They worked with a probiotic available in Canada that contains Bacillus subtilis fermentation extract. Her team includes PhD student Samson Oladokun, who led the project, fourth year student Alyssa Koehler and research associate Janice MacIsaac.

“We set out to compare different routes of administration of the probiotic in broiler production – adding it to feed, drinking water and injecting directly into the developing embryo, or in ovo,” Adewole says. “We looked for the effect on hatch, growth performance and intestinal function.”

Some research existed for the team to draw on about the use of probiotics in ovo, but nothing in Canada. Research on the in ovo administration of some poultry vaccines gave Adewole a head start on what stage of embryonic development to target when injecting probiotics directly into the developing embryo. Researchers in the U.S. had already determined the best time for an in ovo injection in the 21-day incubation period was between 17 and 19 days of development.

Comparing performance
Their research started with 500 fertile eggs, sourced from broiler breeders and randomly divided into three treatment groups for the incubation period – in ovo probiotic, in ovo saline solution and no injection. The scientists made in ovo injections on day 18.5 and tracked hatchability on day 21.

At hatch, chicks were re-alloted to one of six treatment groups – in ovo probiotic, in ovo saline, in-feed antibiotic, in-feed probiotic, in-water probiotic and a control group. The team raised the birds for 28 days, measuring feed intake and body weight, and postmortem sampling to examine the intestinal morphology.

Positive results
“One of the most important findings was that in ovo administration of probiotics did not affect hatchability,” Adewole says. “That’s very important because we needed to be sure the injection was not harming the embryo…and it didn’t.” The in ovo application – along with all treatments – also did not affect chick quality. Those were two important hurdles for in ovo probiotic delivery to be able to ultimately move closer to commercial application.

When comparing growth performance – based on body weight, feed intake and feed conversion – none of the probiotic treatments had a significant effect. “The in ovo probiotic birds did have slightly better feed conversion,” Adewole says. “While it’s not significant, it could still represent a slight cost savings in feed for producers.”

Adewole speculates that the slight improvement in feed conversion for in ovo birds may be because the probiotics were able to start functioning earlier to stabilize the gut with beneficial microbes, allowing the birds to absorb more nutrients, be better equipped to fight disease and cope with stress.

Examining the digestive tract of the birds revealed significant improvements in the in ovo probiotic birds. “Probiotics are able to change the structure of the gut, creating more surface area for the gut to absorb more nutrients,” she says.

Regardless of how probiotics were administered, each treatment delivered the same intended effect of adding beneficial microbes to the bird’s gut.

They also examined a sample of birds from each treatment group at day 28 for incidence of necrotic enteritis in the gut. There was no difference between the treatments. But chickens in the probiotic and antibiotic treatments had the highest number of birds that were completely free of necrotic enteritis. “All the treatments gave the broilers some level of protection, but the results were only significant if the probiotic and antibiotic groups were combined,” Adewole says. 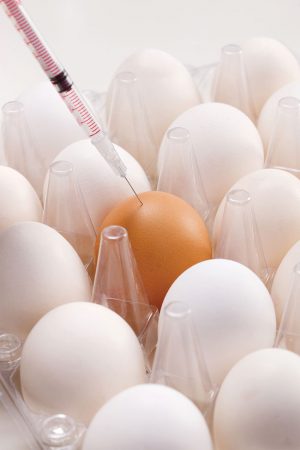 Earlier is better
Adewole’s research clearly established that when probiotics are administered in ovo – compared to in feed or water – they help the bird establish beneficial bacteria in the gut sooner and help the bird fight pathogenic disease. “When probiotics are administered before hatch, the beneficial bacteria can start growing in the embryo because it is already able to consume the probiotic as feed and have it get to work on the gut.”

Feeding probiotics in the diet has the potential for the bacteria to be damaged during feed processing. The benefit of water over feed delivery is that if a bird is sick, they tend to still drink water even if they are off feed, which could ensure they still receive the beneficial probiotic. However, water delivery can result in water quality issues.

“In terms of efficacy, the suggested route of administration is in ovo, followed by in the water and then in the feed,” Adewole says.

For Adewole, her work on the opportunities for in ovo is just getting going. She’ll be looking at in ovo administration of other substances that could improve growth performance in chickens.

In her role, she’s primarily responsible for research and technology development in nutrition and nutrigenomics related to the production of chickens without antibiotics.

She also conducts research and development activities that support responsible use of antimicrobials for chicken production.

Before starting this role, she had extensive experience in poultry nutrition and application of nutrition in poultry health.