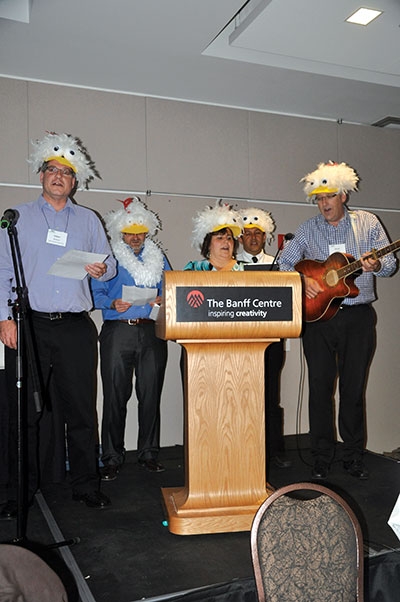 If there were an Olympic award for poultry research and education, Frank Robinson would have won it. An Emmy? Sure. An Oscar? That too, and maybe even a Country Music award after the recent 2013 Poultry Service Industry Workshop (PSIW) banquet in Banff, Alta.

With fellow University of Alberta researcher Martin Zuidhof on the guitar and the rest of the meeting delegates donning chicken hats, Robinson was serenaded by his colleagues and friends with a version of Kenny Rogers’ “The Gambler,” Cluck Style, as they saluted his long career of service to the poultry industry.

On a warm summer’s evenin’ in my barn north of Red Deer
I met up with my service rep, these birds just wouldn’t lay.
So we took turns a staring at the growth charts and the feed guide
‘Til inspiration struck him, and he began to speak.
He said, son I’ve made my life out of reading bird weight records
Of knowing how their birds fared, by the way their fleshing lies
So if you don’t mind me sayin’, I can see you’re out of aces
To save your production, I’ll give you some advice.
We picked up my dusty scale, and walked into the lay barn
Then we grabbed a chicken and held it by its thighs
And the night got deathly quiet and his face lost all expression
Said if you’re gonna play the game boy, ya gotta learn to play it right.

Robinson was being honoured as the 25th recipient of the annual PSIW Worker of the Year award. When his name was put forth for nomination, the immediate reaction around the table was, “What? He hasn’t won already?” said Valerie Carney, for whom Robinson has been a master’s supervisor, mentor and fellow researcher.

Carney co-wrote the Kenny Rogers knock-off along with Dustin Banks and Brenda Schneider. They modelled their presentation after a highly successful “edutainment” initiative created by Robinson called “Heifer in Your Tank,” which challenges students to answer questions about agriculture through a series of skits and songs, bringing agriculture to everyone from children to seniors. The program was awarded the 2005 Canadian Agri-Food Award of Excellence for Agriculture Awareness and Education. Carney has been inspired to take this approach to producer meetings through a similar program she calls “Cluck,” acting out answers to biosecurity questions, for example, in a memorable way.

Frank Robinson joined the University of Alberta in 1986 as assistant professor in poultry production and physiology, with two dozen graduate students under his supervision over the years. His research placed an emphasis on reproductive efficiency of broiler breeders, something that captured his curiosity early in his career. “As you select for growth, reproduction becomes more of a challenge,” he says. He feels fortunate to have forged links with industry so that his team was able to work closely with primary poultry breeders to keep their research close to reality.

Robinson has since received numerous awards, including the prestigious Rutherford Award for Excellence in Teaching at the university and the 3M National Teaching Fellowship – what Frank calls “the big one” – recognizing exceptional contributions to teaching and learning at Canadian universities. Additionally, in 2006, Robinson was inducted into the Alberta Agriculture Hall of Fame.

Along with his poultry team, he received the World Poultry Science Association Education Award for the University of Alberta’s Poultry Research Facility in 2004 in recognition of an outstanding contribution to the development of the poultry industry.

His dedicated fellow poultry faculty members, known collectively at one point around the university as the “Coop of Seven,” have been awarded numerous group awards for teaching as well. Together they have helped to turn out practically trained students that have problem-solving skills and are able to think on their feet. Robinson has been instrumental in bringing together academia and industry with the development of the Alberta Chicken Producers Poultry Technology Centre at the University of Alberta, which features a Lilydale classroom, a student computer laboratory, a poultry processing and packaging laboratory, and an incubation and hatching facility. The Center has now expanded to include exploration of value-added areas of meat and egg science, and it also provides the home base for the ‘Adopt a Heritage Chicken’ Program, where people pay to sponsor an antique hen in exchange for receiving weekly fresh eggs. The program now has 600 subscribers and a waiting list while the funds help pay to preserve unique genetic lines.

While he still enjoys the opportunity of teaching in the introductory animal science class, in 2008 he moved into full-time administration as vice-provost and dean of students at the University of Alberta, with a student population of 38,000.

“The opportunity to have been able to work with younger generations of poultry people and to help shape them to lead the industry has been a highlight of my career,” Robinson concluded. “In every respect the Canadian poultry industry has been supportive in having the arena for this to take place. This next generation is an outstanding cohort who are already advancing the science of poultry production in new ways.” ■