An overview of recent incidence and tips for producers. 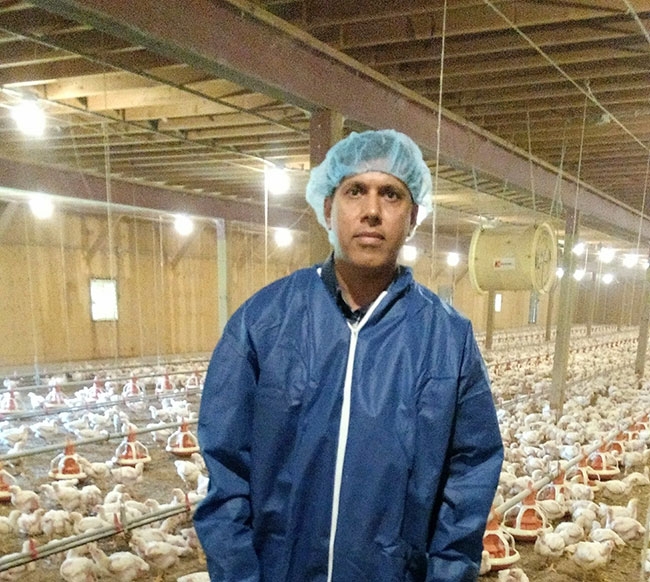 The severity of infectious bronchitis has increased significantly, with the current strain of the virus now making its way around Ontario, notes Dr. Mike Petrik, poultry veterinary lead at McKinley Hatchery in St. Mary’s, Ont. Petrik was one of several veterinarians who took part in a roundtable discussion on the topic at the Poultry Industry Council’s Health Day.

“I think the incidence rate is pretty steady, and it’s always something that we’ve had to deal with,” Petrik notes. “I remember we had an outbreak 15 to 20 years ago. It’s been about a year since we’ve first seen a new strain, Delmarva (DMV). It’s not abnormal to get new strains, and different ones become predominant over time and then fade away.”

Infectious bronchitis is a common disease in commercial chicken production, adds Dr. Shahbaz Haq, also a roundtable presenter at the PIC Health Day and owner of Lakeside Poultry Veterinary Services in Stratford, Ont. “Over the time since I moved to Ontario from B.C. four years ago,” he notes, “I have seen it increase in severity from around November 2016.”

While different new vaccines are being investigated for the current DMV strain, Petrik reports that the existing set of strains and vaccines are not well matched. “They aren’t worthless, but the vaccines we have don’t cross-protect as much as we’d like against the strains we are seeing,” the veterinarian explains. “That’s why biosecurity and early detection are also needed.”

Petrik believes we must first be clear that every single farm is a risk factor for spread of the disease. “Are some farmers doing better than others? Absolutely,” he states. “Farmers have to make sure they are doing as much as they can to be as biosecure as they want to be, and they may need to invest time and energy and money in more resources. Every farmer has to decide how much he or she wants to be protected, but everyone needs to remember it’s the one thing you can control in preventing this disease from being on your farm.”

Haq agrees, and stresses that compliance with basic biosecurity protocol is more important than adding any new measures. “Farmers already have the knowledge about biosecurity, and the question is, do farmers make sure the proper protocols are being followed every day, day after day,” he asks. Technically, infectious bronchitis could be airborne, he says, but could easily be spread by breaches in biosecurity.

Beyond biosecurity
In terms of other actions producers should take, Haq cannot stress enough that good basic management matters a great deal for infectious bronchitis, but also in terms of incidence and severity of many other diseases as well. This includes maintaining optimal temperature in the barn according to the age of the birds, proper feed accessibility, adequate lighting, proper litter management, optimum ventilation and supply of good quality water. Even if the focus is only on infectious bronchitis, Haq says that if chicks are in improper temperature in the barn, for example, they will be much more prone to getting this disease. Compromised air quality is a big factor as well in control and prevention. Carbon dioxide and carbon monoxide levels can be high at the brooding stage and later in the cycle, Haq notes, and there can be high levels of ammonia at the floor/bird level from wet litter. Infectious bronchitis becomes quite challenging to control, he adds, in high stocking density flocks and multiage complexes.

Petrik also strongly advises washing poultry barns before disinfection in between flocks. He notes that if you don’t clean before you disinfect, the disinfection process won’t be nearly as effective. Haq echoes the sentiment. “The manure is where the microbes hide on the floor, but they also hide in dust buildup on other flat surfaces in the barn such as,around the fans and so on,” he says. “Dry cleaning is very important and you should absolutely scrub if you need to.” In addition, proper downtime helps to minimize the infection pressure in the barn.

In terms of early detection, Haq emphasizes to carefully watch for even a slight feed and/or water consumption drop and any other abnormal behaviour because these signs indicate there is a problem, even though no symptoms (including gasping, coughing, sneezing, tracheal rales, nasal discharge and wet eyes) are observable.

Knowing what’s out there
Ongoing genetic typing of strains is also critical to management of this disease in Petrik’s view. “In order to get a handle on where this virus is, we need to do lab tests, which costs money,” he notes. “This means some farmers are not following through with testing and that’s a problem. Knowing how many strains there are and which flocks are infected is really important, and what strains are out there is really important. While typing doesn’t help you treat your flock, it is important information that industry groups and vets can use to manage the disease better.” Petrik and other poultry health personnel meet regularly as part of the Ontario Animal Health Network to go over which strains have appeared where, and more.

“Without typing,” Petrik explains, “we don’t know if we’ve got a new strain or an existing strain, and we will then also not know how it’s moving around the province – how much transfer is occurring between flocks. We know how existing strains play out in a flock and react to treatment and we need to know if we’re dealing with them or something new. We can then optimize vaccine programs as well. Without typing, we are blind and can’t break the cycle.”

Petrik says vets and the industry as a whole “are not just wringing our hands – we are working hard at control and prevention of this disease.”

Haq concludes, “It’s everyone’s responsibility to do their part to keep the levels down.”

Environmental factors that can make it worse