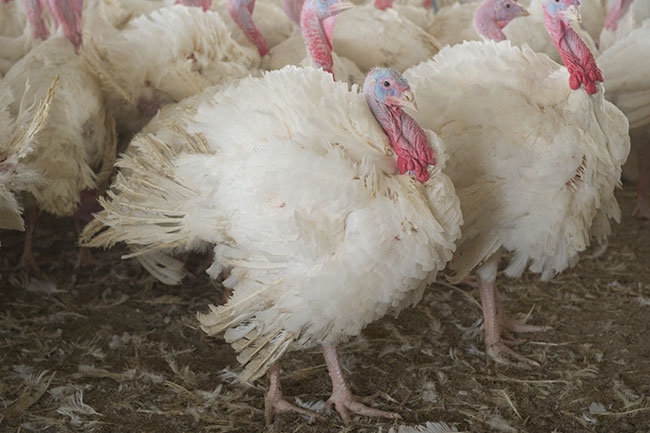 As the industry moves towards a higher percentage of heavy toms in production, the risk of aggressive pecking will continue to increase.

Pecking often occurs in commercially raised turkeys that are bred for their large size. It can result in significant losses if the behaviour is not controlled, as affected birds often have to be culled or their carcasses are downgraded at processing.

But in order to control it, more needs to be known about the behaviour, which led to research involving Ph.D. candidate Hillary Dalton and her advisor Dr. Stephanie Torrey, both from the University of Guelph, and Dr. Ben Wood of Hybrid Turkeys. “As male turkeys reach sexual maturity, they become more aggressive and fight for dominance in the flock’s hierarchy,” Torrey says. “There haven’t been a lot of studies on prevalence, but we know prevalence increases as the birds age, especially in tom flocks.”

Injurious pecking is a combination of behaviours that includes head pecking, severe feather pecking and cannibalism. Pecking is often directed downward onto the head with force, causing injury.

“We were looking at relationships between injurious pecking and other behavioural and physical traits in domestic turkeys to see if there are any correlations and to understand the causation of injurious pecking,” Torrey says, adding that a large study also looked at the differences in beak shape.

According to Torrey, the first couple of studies did not find any clear cut relationships between activity levels, bird body weight, snood length or sexual maturation and injurious pecking behaviour.

The research team did find differences in the types of pecks that were performed by turkeys and some differences in turkey behaviour immediately before and after head pecking. Head pecking is particularly problematic because the head doesn’t offer much protection and beaks can inflict considerable damage, Torrey says.

“We did find there were significant differences in male and female beak shapes, including the hook and angle of the beak,” she says. “We are still continuing work on genetic analysis to look at heritability of beak shape and if you could you select for it if it does play a role.”

As the North American turkey industry continues to move towards a higher percentage of heavy toms in production, the risk of aggressive pecking will continue to increase. This means the industry will need to look for ways to improve turkey welfare, whether by reducing injurious pecking, increasing environmental enrichment or changing management practices.

“As birds get older, there will be more and more injurious pecking so perhaps there needs to be more attention paid to older birds to ensure that any damage that is done is caught quickly before it becomes a welfare concern,” Torrey says, adding that more work needs to be done to determine the causative factors of the behaviour.