The BIOvator, which removes unwanted biomaterial from the farm, was created to help with biosecurity 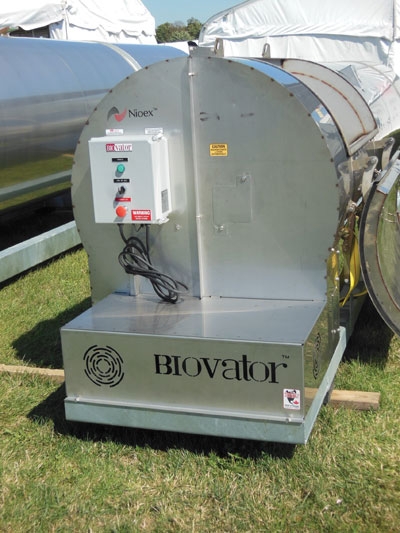 Jamie Brock, Eastern Canada dealer for BIOvator, says the BIOvator can compost anywhere from 30 to 500 pounds of stock per day, depending on the model.

If you were at this year’s Outdoor Farm Show, then you may have met Jamie Brock, the BIOvator dealer for Eastern Canada. Designed by the Puritone Corporation in Manitoba to handle in-house mortality of hogs, the BIOvator has been specifically created with biosecurity in mind.

Now owned by Shawn Compton, president of Nioex Systems Inc., the BIOvator has been on the market for eight years. In recent months, its on-farm value has really sparked the interest of all manner of producers, including poultry.

The BIOvator is an in-vessel composter that uses an aerobic process to break down biological material. It has a galvanized steel frame, a stainless steel shell and an epoxy-coated steel drum. The drum is insulated with one and a half inches of polyurethane insulation, which works out to an R-value of 8. It is also protected by a stainless steel skin that allows it to be kept outside. It has a one-horsepower motor and two gearboxes, enabling the entire drum to rotate multiple times, 24 hours per day. On average, most machines rotate anywhere from 0 to 24 times per day, depending on the needs of the farmer, how heavy the mortality is on their farm and the model being used.

Although the BIOvator is manufactured in Manitoba, interest in the product is global. There are a few units in North America, but also in Argentina, Russia and parts of Europe.

In order to operate, says Brock, the composter needs to be filled with a substrate. Any type of existing compost will do, but preferably something that can warm up very quickly, like manure with a mixture of wood shavings or some other carbon-based substance. Once the initial mixture reaches 100 F, you can start adding dead stock and using it on a daily basis.

“It heats up under its own microbial breakdown, so it’s micro-organisms building all the heat,” says Brock. “There’s no supplementary heat; it’s just an insulated vessel that has all these microbes feeding on bacteria and that’s what creates heat.”

Brock says the BIOvator can compost anywhere from 30 to 500 pounds of stock per day, depending on the model.

“To make it from the loading zone to the discharge is about 10 days, but as the machine rotates, it allows room for something every day because it’s augering itself down to the discharge end on a slow rotation,” says Brock. “So it’s kind of like a slow-running cement mixer.”

As the BIOvator rotates, a little bit of material is augered out with each rotation, so there’s always new room created for more stock. Each model is loaded with both dead stock and biological material, such as wood shavings or carbon product, at a one-to-one volume ratio.

“If you have a wheelbarrow full of dead stock you would have to put a wheel barrow full of carbon product in as well,” says Brock. And the process is ongoing, he notes.

Each model comes with at least one temperature gage; the goal is to reach and maintain 130 F. “If we can reach 130 F on a consistent basis,” says Brock, “it kills all known pathogens in the dead stock. So that’s where the real biosecurity kicks in.”

Without the BIOvator, poultry producers have a number of other disposal options available to them, but none quite as easy. Farm pickup costs about $150 per ton, plus a $30 pickup fee. Farm pickup also means that the farmer has to handle the dead stock twice. It first has to be moved from the barn to a freezer, and then from the freezer to the road. With the BIOvator, there is no need for a freezer. You simply load it up as needed.

Other methods of disposal can be tricky as well, especially when it comes to biosecurity, says Brock. The stock can be taken to a rendering plant, but farmers will have to bring their vehicles onto the property. At a fee of $150 per ton, it’s not much cheaper than the on-farm pickup, and it’s far less secure because you have the risk of walking through a plant where other trucks have been.

Poultry producers do have the option of burial, which is still legal, but burial poses its own set of problems. Buried stock tends to draw unwanted animals, such as coyotes, plus it is not as safe in terms of biosecurity.

Some producers choose bunker composting where dead stock is stirred into manure and wood shavings using a tractor.

“The pros to that are that it’s reasonably economical,” says Brock. “The cons again are [compromised] biosecurity, because your tractor is handling partially decomposed livestock. So you can contaminate your on-farm tractor and it’s running around doing jobs for you on the farm, so that’s a risk.”

“Most of the pros with the BIOvator come down to biosecurity and the daily cost to run it,” Brock continues. “When you look at strictly the energy use of a BIOvator, it’s basically a hundred bucks a year – and that’s all in hydro.”

In the very near future the BIOvator could save producers even more money. Nioex is trying to team up with a local company to fix the vessel using solar panels. This would further improve biosecurity, as it would allow the composter to be put in a remote, off-site location.

“There’s a lot of interest in it,” says Brock. “I’ve probably had 10 to 15 per cent of my clients ask about it before they even knew we were doing it and that’s what spurred this on.”

Nioex is currently trying to come up with a cost-effective way to make it a suitable option. “I would say in the next 12 months we are working on it to become an option where they can order it with solar,” says Brock.

Mark McColl, a turkey breeder whose family has been in the industry for 64 years, has had a BIOvator on site since June. Located outside of Forest in Plympton-Wyoming, the farm commercially raises 6,000 breeder turkeys, 7,000 replacement birds and 1,500 toms.

“After having this unit for six months it is hard to see how someone can go without,” says McColl. “Having this system when they are in strict biosecurity like we are, being able to get rid of the dead stock and the eggs without having to worry about digging in a manure pile or going to the incinerator or having the rendering truck show up to your farm makes it worth every penny.”

“Also knowing that there are no emissions coming from it, no fuel going into it, and the final product being pathogen-free, as well as a useful product for our fields, makes it that much better,” he continues.

John Petropoulos, a poultry farmer in the Niagara Peninsula region, agrees. He runs an operation with approximately 20,000 to 24,000 chickens and approximately 12,000 to 15,000 turkeys at a time.

“Before we used an incinerator,” says Petropoulos, “and we had to manage the incinerator more often. You couldn’t put them all in; you had to put them in in different batches. And then once the incinerator was done, ash was a totally non-usable product, so you had to dispose of it any way you could.”

On the other hand, he says, the BIOvator produces a usable product. “You can use it on flowerbed and compost piles, or put it in the fields.” Even his manure removal guys will take BIOvator discharge, whereas they couldn’t put the incineration on manure piles to be taken away.

Petropoulos says that the BIOvator has also helped to lower his farm’s operating costs, since he’s not burning natural gas for the incinerator anymore. “I’m thinking in three to four years it’ll have paid for itself, maybe sooner,” says Petropoulos.

It is possible, as the BIOvator has a recorded lifespan of 25 to 30 years.