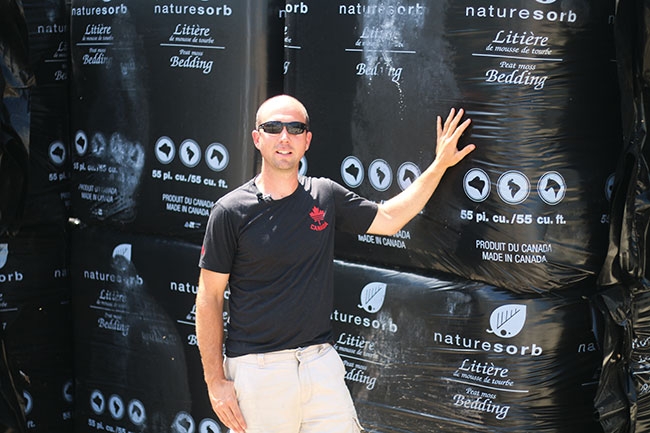 Production: Ryan Kuntze and his family own two broiler barns in Stratford, Ont. A smaller barn they opened last year, their first foray into chicken after 15 years as pullet farmers, houses 10,000 birds. A larger barn they opened a few months later houses 22,000.

Equipment specs: The producers used straw bedding for their first flock but were disappointed with how it absorbed moisture. A dairy-farming neighbour recommended they look into using peat moss instead of straw. They heeded his advice and heard that not only was it effective at capturing moisture but it also brought health and welfare benefits as well. The Kuntzes decided to give peat moss a try, sourcing it from a Quebec-based company called Naturesorb.

Innovation factor: Before making the switch, Kuntze visited a supplier and chicken producer in the Netherlands who was using the bedding alternative in his own barn. He made the long journey because so few Canadian producers use it. “I was kind of a guinea pig,” Kuntze says. He notes that barn conditions, footpad health and manure quality have all improved since he started using peat moss. The bedding also allows birds to dust bathe. “It was really about the health and welfare of the birds,” says Kuntze, who now distributes the product in Ontario.