A system that automates 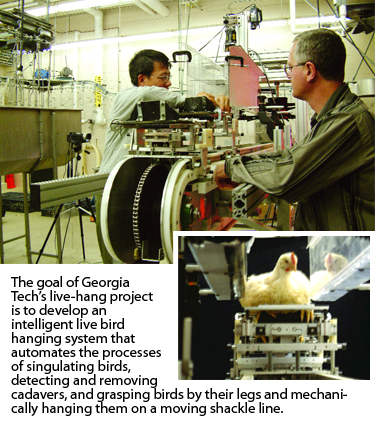 Research focus
The goal of Georgia Tech’s live-hang project is to develop an intelligent live-bird hanging system that automates the processes of singulating birds, detecting and removing cadavers, and grasping birds by their legs and mechanically hanging them on a moving shackle line. The research team is in the development stage of the project and is using predictive models, sensors, and neural networks to provide intelligence and learning capability to the prototype system. This system will ideally function as a tireless worker capable of performing at or beyond the rate of humans while avoiding many of the shortcomings currently seen in the process.

Background and challenges
For more than a decade, the poultry industry has sought to find an economical and technically feasible automation process for transferring live birds from the conveyor to the shackle line during processing. Today’s manual-hanging process can introduce quality problems in the form of bruising and damage to the drumsticks and wings of the birds.

Inconsistent hanging performance can lead to lower processing line efficiency. A multidisciplinary team, consisting of researchers from the Georgia Tech Research Institute, Georgia Institute of Technology, and the University of Georgia, is currently engaged in addressing these problems. Their efforts are being directed toward the development of a prototype live-hang system for the poultry industry.

Project overview
Researchers are envisioning a system that will unload caged birds onto a moving conveyor. The conveyor will transfer the birds between a pair of contra-rotating drums with rubber fingers that serve two functions. The first function causes the birds to stand, while the second singulates the birds so that they leave the rotating fingers one-by-one. These singulated birds would then be led through a cadaver-detection system. Because each live bird exiting the rollers will be in an upright position, it is distinctly different from the posture of a cadaver. Machine-vision techniques would then identify cadavers that can subsequently be removed.

Birds still on the conveyor would then be directed to a mechanical grasping system. The system’s intended design consists of a pair of soft rubber fingers and a gripper. All of these would be synchronized using a digital controller. The bird would first be fed by conveyor through a pair of soft rubber fingers, which would gently constrain it. Then, to allow for accurate grasping, a vision system would be used to determine the orientation of each incoming bird. This would provide a basis for estimating if the bird needs to be reoriented and the subsequent location and orientation of the bird’s legs. Next, the digital controller would determine a location and the position of the grasping mechanism in order to pick up the bird’s legs. Finally, the grasped bird would be loaded onto a moving shackle. Once in the shackle, the bird would move into a buffer line. From this buffer, the bird would be transferred to the kill line.

In addition to addressing quality and related problems, researchers anticipate the device will bring a net cost savings to the industry. Today’s shackle lines typically run at speeds of 120 to 180 shackles per minute and require about eight workers to fill the lines with birds. Researchers believe that the prototype can match that rate if three units are utilized. While the final system cost is still unknown, it is believed the completed system will be able to meet industry cost-payback criteria.

Future directions
Although far from complete, the research team is enthusiastic about the project’s progress to date. Work will continue on developing a prototype system that can be integrated into a commercial kill line. Attention will also focus on evaluating the birds’ responses to prototype devices that restrain them and pick up their legs. If all goes well, this project should yield a device that should be ready for commercial trials within two years.