Poultry science is, as is all agriculture, a global enterprise. So
Agriculture Research Service (ARS) scientists in Athens, Georgia, have
launched a host of collaborations with scientists from the former
Soviet Union to further advance research in food safety and health of
poultry. 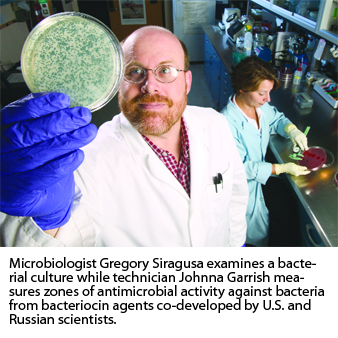 Poultry science is, as is all agriculture, a global enterprise. So Agriculture Research Service (ARS) scientists in Athens, Georgia, have launched a host of collaborations with scientists from the former Soviet Union to further advance research in food safety and health of poultry.

Scientific organizations from the former Soviet Union involved in this and other collaborative endeavours with the United States previously conducted biological weapons research. Through funding and coordination by the Department of State, the Moscow-based International Science and Technology Center (ISTC), and ARS’s Office of International Research Programs (OIRP), several teams are collaborating with their Russian Federation and Kazakhstan counterparts on various projects, including one to develop and assess bacteriocins to combat Campylobacter and Salmonella, one to address the global issue of avian influenza, and another to characterize new avian influenza and Newcastle disease virus isolates and develop vaccines by using new techniques.

Bacteriocins Halt Campylobacter and Salmonella
Bruce Seal, research leader for the ARS Poultry Microbiological Safety Research Unit in Athens, is directing his group in the area of reducing foodborne bacterial pathogens like Campylobacter and Salmonella. These organisms can potentially cause illness in people who eat undercooked or cross-contaminated food. The scientists are continuing work spearheaded by ARS microbiologist Norman Stern, who was awarded two patent applications relating to bacteriocins, which are low-molecular-weight polypeptides that kill competing organisms. Stern was the first ARS researcher to travel to Russia for scientific collaboration under the OIRP-led program.

Bacteriocins were purified and tested on broiler chickens challenged and colonized with either Salmonella or Campylobacter, but Stern focused his endeavours on Campylobacter. The work was completed in collaboration with Edward Svetoch, a Russian Federation scientist at the State Research Center for Applied Microbiology in Obolensk.
Svetoch and Stern evaluated tens of thousands of bacterial isolates from poultry-production environments. They have found anti-Campylobacter activity in several organisms and have published their findings on Bacilluscirculans and Paenibacilluspolymyxa.

To find the promising bacteriocins, Stern, Svetoch, and colleagues started by examining more than 25,000 bacterial isolates, narrowed the focus to 365 isolates, and found a few that combat Campylobacter. Dozens of bacteriocins are still being analyzed for efficacy against Campylobacter.

“This work has confirmed that bacteriocins can reduce Campylobacter to nearly undetectable levels in the intestines of chickens, and that means less human exposure to this pathogen,” said Stern.

“Recently, we have successfully enhanced production of bacteriocins, which will make it much more attractive for industrial testing. There has been substantial interest by industry to license the technology. The work we’ve done with bacteriocins suggests they might someday be used as an alternative to antibiotics.

“A lot of work has been done in five years, and we hope that bacteriocins can be widely used in the poultry industry and then expanded to domestic animals.”
Stern emphasizes that the research was a collaborative effort. “Our Russian counterparts provided a great deal of support by employing 24 scientists to generate and compile data for this work.”

Migration of Avian Influenza
At the ARS Southeast Poultry Research Laboratory in Athens, lab director David Swayne and veterinary medical officer David Suarez are collaborating with scientists in Moscow, Novosibirsk, and Vladimir on avian influenza identification and characterization. One collaborative study was begun in 2004 to conduct surveillance of wild bird populations, as well as domestic bird and swine populations, for avian flu activity. The Russian researchers collected samples from different parts of Russia and collaborated with ARS scientists for virus isolation and DNA sequencing. “Some of the analysis was conducted during site visits to Moscow by ARS scientists,” says Suarez. “Russian scientists were also provided training in some of the analytic procedures.”

Another aspect of the collaboration is getting a handle on the basic ecology of avian influenza. To do that, researchers took the birds’ migratory routes into consideration.
In this case, birds stopover in Western Siberia and Kyrgyzstan during their migration to South China. Scientists collected samples from 48 avian species in these stopover areas and analyzed almost a thousand samples for viruses.

“We found 40 type A influenza viruses and 44 strains of paramoxyviruses. Type A influenzas are those we often hear about in the news, like H5N1, which has caused outbreaks that have infected chickens and people in Southeast Asia. Paramoxyviruses are other viruses found in birds that can result in Newcastle disease outbreaks in poultry,” says Suarez.

The main reservoirs, or hosts, for type A viruses are mostly aquatic birds, with a fecal-oral route of infection to the intestinal tract. The genes of these viruses undergo reassortment, producing new virus variants, including those with potential to cause epidemics in other animals, like minks, seals, swine, and humans.

The other flyway starts in the Baikal region and Transbaikalia and crosses the Gobi Desert and Bolshoi Khingan to reach China and farther south, an area considered to be the epicenter of new potentially pandemic influenza virus variants.

“Detecting and monitoring influenza viruses that have that potential are of the utmost importance from an economic and global health perspective,” says Swayne. “In Vietnam, more than 18 people have died from avian influenza transmitted from poultry to humans. So far, human-to-human transmission has not been seen or proven.”

The collaborative group has found that some avian influenza variants not previously found in Russia were isolated during this project. Data also suggests that one variant, H4N6, has expanded its host range and that aquatic mammals, mainly muskrats, are involved in maintenance of the virus in nature.

“These developments warrant further testing and monitoring to help inform health officials and poultry raisers about possible migration of the virus with the wild birds to other locations along the migratory flyway,” says Swayne. “ARS animal research is essential to stemming the tide of avian influenza.”

Advances in Vaccines
Immunization is recognized as an important component of disease control. Development of vaccines for avian influenza and Newcastle disease within this project has focused on construction of immunostimulating complexes (ISCOMs), a vaccine type commercially available for prevention of some diseases of horses and cattle. ISCOMs are composed of antigens extracted from whole virus and combined with lipids and plant saponins. The saponins are known to enhance the animal’s immune response to the antigens. Assembly of the ISCOMs produces a virus-like structure that is noninfectious because it doesn’t contain any viral genetic material.

Project scientists have purified saponins from two different native Kazakhstan plants and incorporated them into ISCOMs for Newcastle disease. They’ve shown that this produces an immune response in chickens comparable to that of a Newcastle disease vaccine prepared with a commercially available saponin known as “Quil A.” These preliminary results demonstrate potential for developing effective avian influenza and Newcastle disease vaccines with locally developed rather than imported saponins.