Introducing the Egg Farmers of Ontario

Reflecting on Canada’s unique marketing system and how it has benefited
farmers and consumers for the past 30 years, Ontario Egg Producers
officially changed their corporate name to the Egg Farmers of Ontario. 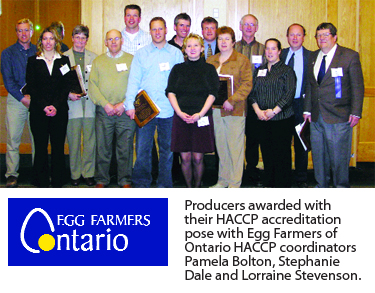 Reflecting on Canada’s unique marketing system and how it has benefited farmers and consumers for the past 30 years, Ontario Egg Producers officially changed their corporate name to the Egg Farmers of Ontario.  The board feels this new name shows the pride felt by their members with respect to being farmers, and that it will help the organization continue to tell the benefits of supply management story.  The announcement was made during the organizations’ 41st annual meeting, held at the Toronto Airport Marriott hotel in late March.

A Year of Positive Change
In their joint report, Egg Farmers of Ontario Chair Carolynne Griffith and General Manager Harry Pellisario noted that 2005 was a year of positive change for Ontario producers.

Not long after their 40th annual meeting ended, staff and Directors began a strategic planning exercise that resulted in a comprehensive 20-point plan that will be implemented over the next five years.   Producers were involved and several meetings took place across the province.  Some of the points included in the plan:

Protecting the pillars of supply management by effectively collaborating with national and other provincial boards.

Growing their leadership role in policy, communications, programs and practices.

Continue to be seen by government as a self-sustaining industry that requires little or no financial intervention.

On the advice of both Directors and producers, the Egg Farmers of Ontario introduced a per bird levy, reinforcing the belief that each unit of quota should support the system equally.

The Egg Farmers of Ontario established an Early Fowl Removal Program and a new Eggs for Processing (EFP) payment schedule in cooperation with CEMA.

Along with the other feather boards in Ontario, the Egg Farmers of Ontario cooperated in a joint initiative to create the Feather Board Command Centre.  This centre can be mobilized any time a possible emergency situation occurs.

2005 marked the first complete year of Egg Farmers of Ontario layer farms operating under the Start Clean – Stay Clean ™ program from CEMA.  The board thanked producers for making the transition from Ontario’s original HACCP program to CEMA’s program virtually seamless.

In 2005, 79 per cent of all egg production came from HACCP enrolled farms.

Egg Farmers of Ontario was pleased to award the following with HACCP accreditation at the annual meeting:

To keep up with the new long lasting positioning, the Egg Farmers of Ontario became a sponsor of the Ontario Hockey League for the 2005-2006 season.  Part of the sponsorship agreement included featuring the Eggmark and Get Cracking logos on the four rinkboard blue lines in each of the 17 Ontario Junior A hockey arenas.  The organization sponsored home games for seven Ontario teams, and plans to sponsor ten different teams in 2006.

Egg promotion was increased by 20 per cent in 2005.  The Egg Farmers of Ontario promoted eggs at 315 fairs, exhibits and events across the province.

Defining the Canadian Consumer
Guest speaker David Baxter of the Urban Futures Institute told those attending the annual meeting that consumers rule – but posed some interesting questions on what rule do we follow and which consumers will affect the future of egg consumption.

Baxter said that marketing with energy is appropriate since future consumers will be older, and that life expectancies, particularly for males, are on the increase.  He said that ethnic groups will also play a significant role in future consumption and marketing efforts.  “It’s not just the dozen in the box story anymore,” he said.

Baxter noted that the greatest diversity in Canada in not in the appearance of the consumer, but in their values.  “Values are fundamental,” he said.  “People feel strongly about things, and base their buying decisions on values.”

He said that the future lies in how groups market to Canadians, and that the definition of Canadian is not necessarily clear.  He added that ethnicity doesn’t matter, except to those to whom it matters, such as egg producers.  Some ethnic cuisines do not use eggs to a significant degree, and that the urban consumer is choosing ethnic foods more often.

Baxter said that opportunities exist for value-added marketing – food as a ‘designer’ or ‘functional’ experience and niche markets (such as organic).