It’s All About Trust

Farmers need to operate in a way that is consistent with consumers’ values, says expert 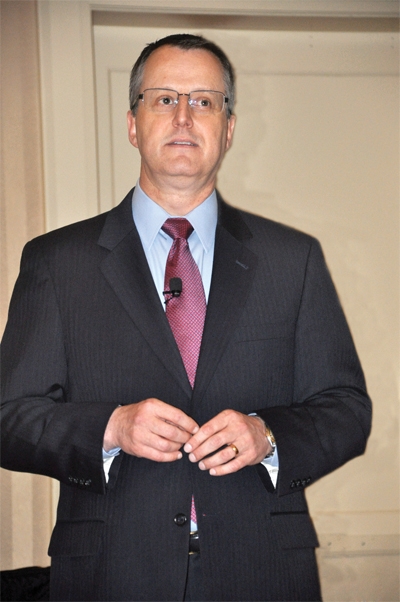 Charlie Arnot, CEO of the Center for Food Integrity, says that if the public trusts you to do what is right, they will grant you a “social licence” and they won’t feel the need to restrict your freedom to operate.

For today’s consumer and today’s public it’s all about values. They not only want food to be affordable and safe, but they also want to know the people producing that food aren’t in it just for the money and are doing more than meeting the minimum regulatory requirements. They want to know the animals are well treated and the environment is being protected.

Speaking at the Egg Farmers of Ontario (EFO) annual meeting Charlie Arnot, CEO of the Kansas City-based Center for Food Integrity, said: “Being good at producing eggs is not adequate; it is not enough to be successful in today’s environment and it certainly won’t be enough going forward.”

It’s also not enough to trot out surveys that show the public likes farmers. The problem is that they may like farmers, but today’s agriculture is so different from farms of the past the public isn’t sure that you’re the farmers they have in mind.

The public is leaning towards seeing agriculture purely as a business and, if this perception is reinforced by farmers focusing solely on profitability, that creates a trust problem. People are more likely to place their trust in those that operate under a clear set of principles rather than those who act in certain ways because it’s profitable, he said.

Research has shown that argument and ones like it put agriculture on the same level as business in terms of most people’s moral hierarchy. Business ranks lower than environmental groups and many activist organizations in the minds of consumers because those groups’ values are based on a set of moral principles, and doing what they believe is the right thing.

Agriculture operates under what Arnot calls a “social licence.” Under a social licence farmers are given the privilege of producing food with limited restrictions on how they operate.

“If the public trusts you to do what is right, they will grant you that social licence. They won’t feel the need to restrict your freedom to operate.”

But the social licence is a fragile thing. One bad incident, one significant breach of trust and it can be gone. This happened in the U.S. after the Iowa contaminated egg situation a couple of years ago. It was a single, albeit very large, operator but he operated in ways that threatened public safety and breached the public trust. The result is new legislation, new regulations and litigation. And this doesn’t affect just the one bad player – it affects everyone.

A social licence “is an opportunity to demonstrate that you are operating in a way that is consistent with a consumer’s values.”

This is particularly true when it comes to brands. Big brands like Wal-Mart and the restaurant chains have recognized the need to show consumers that they share values. Wal-Mart, for example, was recently cited as the greenest company on the planet.

The brands also know that their suppliers must also live up to consumers’ values and expectations. Activist groups have learned that one of the most effective ways to initiate change is to go after the weakest link in the supply chain.

If they find farms that are supplying a brand aren’t living up to the brand’s stated principles, they will go after it. If the supplier doesn’t change its ways and meet the brand’s requirements and activists’ demands they will no longer be a supplier.

In effect, the brands say: “We believe what you are doing on your farm puts our brand at risk so we are going to mandate how you actually produce,” he said.

It’s all about trust, Arnot said. Trust is fundamental to the social licence and essential for today’s agriculture.
Building trust wasn’t even on agriculture’s radar until 2007 when the Center for Food Integrity (CFI) was formed.

Traditionally, agriculture fought off attacks by citing science or by attacking the activists. Science is still essential, but it isn’t enough, and fighting fire with fire might make farmers feel good, but it has proven ineffective.

The CFI is a not-for-profit organization whose goal is to promote dialogue, model best practices, address issues that are important to consumers and serve as a resource for accurate, balanced information about the food system.

Public trust means what you are doing is consistent with public expectations. But it is a moving target, he said.

Once you transition from social licence to social control it’s all about “regulation, legislation, litigation and compliance,” he said.

You have to show that as an industry, as well as an individual, you share the values of those in the community. People aren’t sure you still care. The scale and technology has changed things, he said.

And you must recognize that the public sees the difference between can and should. The science may say you can use that feed, but should you? Should you have cages? “You need a good ‘should’ answer,” he said.

“You have to stress that you are interested in the same thing they are – the well-being of the animals.”

Egg Farmers of Ontario are on the right track with their “Who made your eggs today?” campaign, he said. It brings to the forefront farmers and shows that they care and share the public’s values.

It is genuine people telling genuine stories and that is what the public wants and needs, he said. It gives the public the sense that they know these farmers and that is essential.

But there is always more to be done. The public wants to know you and it is in your self-interest to get to know as many of them as possible. Join community groups, answer questions and be open. “We need a dialogue telling people who we are and what we do.”

“The world will no longer leave you alone. You need to be engaged in the conversation or someone else will be making the decisions for you,” he said.

“People will continue to give him (a farmer) the benefit of the doubt even if they may not like his production system because they like him.”

Farmers must also recognize that the world is now fundamentally different than it was. “Are you prepared to engage at the speed of Twitter?” he asked. Anyone, anywhere can go on Twitter and the message is around the world immediately. Anyone with a cellphone can make a video and post it on You Tube. You have to be ready for that and prepared to respond to it.

“You need to be prepared to engage instantaneously. It is incredibly hard but you must be ready,” he said.

You must also be prepared to take politically difficult actions. “If there are farmers who are putting the industry’s social licence at risk you need a strategy to deal with that. If you don’t they can bring the whole industry down.”

You have to be willing to hold one another accountable and deal with those who cut corners and who are jeopardizing the collective social licence, he said.

Egg farmers got into egg farming because they have a passion for egg farming. They didn’t go into egg production because they wanted to be engaged in issue management or public relations, but they must because simply being good at producing eggs is no longer enough, he said.

More information on CFI can be found on the organization’s website: www.foodintegrity.org.