James Gunther’s layer operation has won the BCEMB’s Producer of the Year award each year since its inception. 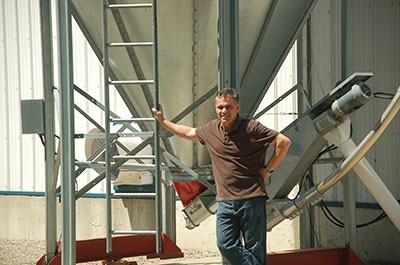 Nine years ago, the B.C. Egg Marketing Board (BCEMB) introduced its Producer of the Year Award recognizing B.C. egg producers who excel in food safety and animal care practices.

To earn the award, producers must score a minimum of 95 per cent on both the Egg Farmers of Canada “Start Clean-Stay Clean” (layers) program and the Egg Farmer’s of Canada (EFC) Animal Care Program and successfully complete a SC-SC (Part 3) audit. It is a testament to the increasing attention B.C. producers pay to food safety and animal welfare that 95 of B.C.’s 133 registered egg producers (71 per cent) qualified to be Producers of the Year in 2013.

But that was not always the case. When it was introduced in 2006, only one producer earned the award: James Gunther of Jake’s Poultry Farm in Abbotsford. Now 47, the second-generation egg producer has been farming for 27 years.

“I bought a 6,000 bird quota when I was 20 and leased a barn from my Dad,” Gunther recalls. To help make ends meet during the early stages of the operation, he also drove a grain truck for 13 years.

About 15 years ago, he was looking for a new home for his birds, and/or a new opportunity, when the property he is now based on became available.

“I had looked at it earlier, but at that time it was out of my price range.”

He was mulling it over when his Dad gave him an ultimatum. “Dad told me I had the weekend to decide and if I passed on the farm, he would buy it on Monday.”

Gunther took the plunge, transferring his original quota to his parents and taking over the 16,000-bird quota that came with the new farm.

“A year later my Dad passed away from cancer, and I amalgamated the two quotas (which with industry growth was now total about 50,000 birds) under my Dad’s existing farm name and started building here.”

What he built was a pullet-rearing barn, a large layer barn divided down the centre and two smaller layer barns. Gunther always has two flocks in production, spaced seven months apart. Half of each flock is in the large barn and the other half in one of the smaller barns.

It appears that by becoming B.C.’s first Producer of the Year, Gunther foresaw the direction the industry was heading in, but that is not the case. “I’ve never farmed thinking ‘this is the future.’ I just do what I think is the right thing.”

He credits then EFC auditor Liam Keanne for encouraging him to pursue the award.

“He constantly asked me to do the audit. He suggested I might get more for the eggs but I didn’t believe it and it didn’t happen,” he says. “I didn’t look at it as leading the way. I thought it was a challenge. It’s more about the self-satisfaction.”

So how does Gunther achieve the award year after year? Through very systematic, organized record-keeping and thorough barn cleaning between each batch.

“We’ve always kept records but we’re always upgrading to better charts and better spreadsheets,” he says, admitting “I’m a bit of a tech kind of guy.”

His daily production records allow him to spot and address problems very quickly. Housing each flock in two barns also allows him to determine whether those problems are barn- or equipment-related or due to feed.

Gunther firmly believes every producer should be on the SC-SC and animal care program, saying “I’m surprised it isn’t already a mandatory program. When retailers come ask about animal welfare, I want to confidently say to them this is what I do and why I do it.”

Despite that, and although he has been a Producer of the Year for each of the past nine years, Gunther is not sure how long or even if that will continue.

“The bar is now being raised so high it’s almost become unattainable.”

When he built his barns 11 years ago, his cages met the standard of 64 square inches/bird. Almost the day after they were built, the standard was increased to 67 square inches. Now the BCEMB has raised the standard to 80 square/inches with no grandfathering of existing barns.

Although Gunther has the room to go to 80 square inches for his existing quota holding, B.C. producers are about to get a quota increase and he does not have space for both. “I will need a whole new 10,000-bird barn.”

He questions the merits of the new standard, claiming there is no scientific basis for it. He cites research that showed birds performed more poorly with 80 square inches than with 64.

“The barns were colder because it is harder to maintain temperature.”

He believes the new standard has put the industry “in chaos” as producers, including him, wrestle with what to do.

“That’s a real tough issue. I question the enriched cage — it’s still a cage,” he says, asking “how can you get a loan to put in equipment when you don’t know how long you can have it?

If we just let special interest groups control us, we’re in big trouble.”

He recalls how impressed the public was when hens were first housed in cages.

“What happened to the people who thought it was awesome?”