A giant in the poultry world

Jimmy Johnstone will be well remembered by Canadian egg producers in
business prior to about the year 2000.  He represented the producers of
Bruce, Grey, Dufferin, Simcoe and Muskoka counties of Ontario for 27
years. Jim passed away on July16, 2007. 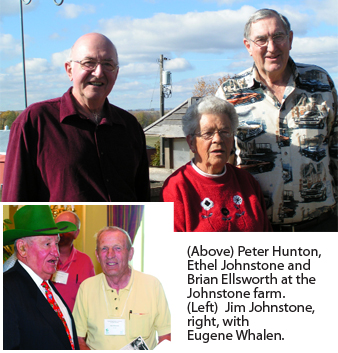 Jimmy Johnstone will be well remembered by Canadian egg producers in business prior to about the year 2000.  He represented the producers of Bruce, Grey, Dufferin, Simcoe and Muskoka counties of Ontario for 27 years. Jim passed away on July16, 2007.

While always attentive to local needs, Jim’s influence went far beyond them, because he was instrumental in the evolution of the local marketing board, which we will here refer to just as “the Egg Board.”  He was also involved in integrating the Board into the national structure and was one of the original signatories of the federal-provincial agreement that led to the creation of CEMA.

But Jim was much more than a Board member.  He didn't even start life with the intention of becoming an egg farmer. Jim was born in Alberta in 1931, but grew up in Ontario.   He left home at 16 and held various jobs before he began working for Ontario Hydro.  Much of his work involved catering in various forms; he worked at Hydro camps in Northern Ontario, in a fancy restaurant in Niagara Falls, and many other places. His prowess with the barbecue will long be remembered by the many people hosted at the Johnstones' various residences. Jim married Ethel (who would be his wife for almost 56 years), in 1951.  They had two children; who both still live in the area. Ethel's family was involved with chicken and egg processing in Alliston, Ont.  Eventually Jim and Ethel settled  in Alliston as egg producers in the late1950s.

Jim was first elected as the director for Zone 9 in 1970, and became chairman in 1972. At this time, the industry was in a state of turmoil and such programs as surplus removal, cost-of-production pricing, and quota allocation and transfer were still being worked out. Ontario and Quebec still had to work through their infamous “chicken and egg wars.”  Ontario traditionally sold eggs into Quebec, while meat chickens moved in the opposite direction; these trading patterns were not reflected in the  original quota and marketing arrangements when the respective marketing boards were established. During the period that Jim Johnstone chaired the Ontario board, policies moved from confrontation to co-operation with Quebec and, indeed, with most other provinces. These changes resulted from Jim’s capacity for  conciliation and respect for his counterparts across the country.

During his tenure, the Ontario board developed its own unique structure, with professionally managed advertising, public affairs, research and technical support, in addition to its primary activity in quota control, product pricing and marketing. Jim was responsible for hiring both of us, but his recruitment of Brian Ellsworth must be one of his greatest achievements, because as a partnership, they had no equal in Canada's “poultry politics.” Jim Johnstone naturally worked on an “Ontario first” strategy, but he was always aware, especially when at work with the many CEMA committees he belonged to, that compromises might be necessary. He acquired a reputation for thoughtfulness and fairness that served him and Ontario producers well.

In the 1980s, when animal welfare concerns began to intensify, Jimmy became involved with the formation of the Ontario Farm Animal Council. He was its first chairman, serving from 1988 to 1992. The Council, which now has counterparts is several other provinces, was designed to provide information of value to consumers in their quest for welfare-friendly food from the animal industry.  Entirely funded by  industry, OFAC has a significant budget, but one completely eclipsed by the high-profile organizations like PETA, the Humane Societies and SPCAs that are ranged against it. Nevertheless, OFAC began its life with Jim Johnstone as its chair, and Leslie Ballantyne as its sole employee. Over time, the Council became recognized for its reliable information, and was able to expand its activities.  Jim's vision paid off, and the Council was able to offset, to a remarkable extent, some of the misinformation disseminated by the animal welfare and animal rights lobbies.  OFAC is now firmly established with a presence in many farm shows and consumer gatherings;  it is also able to undertake speaking engagements in a variety of settings.

Following his retirement as chair of the Egg Board, Jim was appointed to the Ontario Farm Products Marketing Com-mission. For six years, he was able to contribute his knowledge and expertise to this group, further consolidating his already-high reputation as a farm politician.

With such a commitment away from home one could easily conclude that Jim would have little time for anything else.  Not so; when he wasn’t at the Egg Board or another external affair, you could usually find him gathering eggs or doing other chores around the farm. On one such day, the CEMA advertising crew came calling, and made one of the much-loved TV spots showing real producers doing the job they loved best: working with hens and gathering eggs. Thus Jim Johnstone became exposed to a much larger audience, but his obvious credibility and respect for his product must have struck a chord with consumers.

His two extramural passions were golf and theatre.  He was a good golfer (to which Brian can attest) and a real trouper on stage.

Jim and Ethel were both loyal members of the Bear Creek Golf Club, and while he was no Tiger Woods, Jim had endless ambition and always went for the “big shots.”  His seven-wood is to be preserved as a memorial at the golf club, where Jim was posthumously honoured in late 2007.

Jimmy was a founding member of the South Simcoe Theatre Group. He acted, sang and danced. When he wasn’t
doing this, he built sets, and Ethel ran the box office. Anybody who saw him play Alfred Doolittle in the South Simcoe production of My Fair Lady will never forget it.

For egg producers, Jim was the right man at the right time, and the institutions he worked with remain strong today, at least partly due to his influence in their early years.

Above all, Jimmy Johnstone was a great friend.  Regardless of the situation, he always had a kind word, and if there was a smile or a laugh to be found, you could rely on him to find it. n