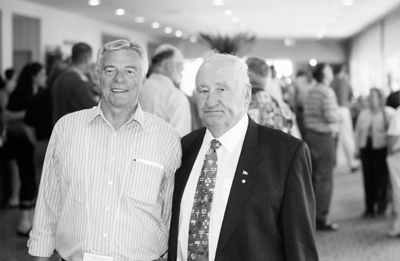 John Wise was born in 1924 in St. Thomas, Ontario and held a federal constituency in Elgin. He is a fifth-generation dairy farmer. Wise has held a number of positions including president of the Oxford and District Cattle Breeders Association (now Western Ontario Breeders), and has been a dairy cattle judge, chairman of the Elgin and St. Thomas Planning Boards, and director of the Elgin Co-operative Services. He is also the honorary founding president of Soil Conservation Canada.

Wise was active in farm organizations and in municipal politics and planning for more than 15 years before his election to parliament. He served as councillor, deputy reeve and reeve of Yarmouth Township through the 1960s and became warden of Elgin County in 1969. Three years later, he was elected MP for Elgin, a seat he held through five consecutive elections until 1988, when he did not run.

Based on his experience, Wise was a natural fit for the roles of opposition dairy and agriculture critic through the 1970s. He also served as critic for supply and services (1983-84). He developed Conservative agriculture platforms and policies and chaired his caucus’ agriculture committee in 1976. When Joe Clark’s Conservatives won the 1979 election and formed a minority government for nine months, he was appointed minister of agriculture. Four years later, he became one of the few Clark-era cabinet ministers to retain the same portfolio in Brian Mulroney’s majority government.

Wise had the challenge of protecting the principles of supply management while introducing his government’s free trade policies to the agriculture industry.