Jim Judge and his son Rob have an eye on the future and were awarded a 2013 Premier’s Award for their self-made solution to combating poor corn yields. 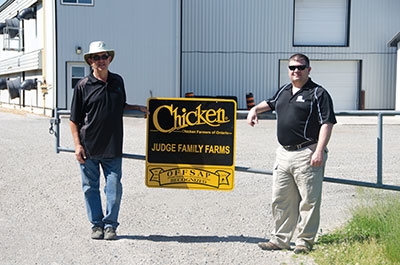 Jim Judge (L) and his son Rob have an eye on the future and were awarded a 2013 Premier’s Award for their self-made solution to combatting poor corn yields.

Progressive, proactive, technology-focussed — these are three words that well describe J&S Judge Farms in Norfolk County, Ont., one of a number of businesses that the Judge family owns and operates.

“Our first broiler chicken farm with 30,000 quota units was purchased with 50 acres of land, and this farm is still the home base of our operations,” says owner Jim Judge. Over the years, the family expanded the broiler operation to two more sites and just over 103,000 quota units. The family also has a 2,300 farrow-to-finish hog operation that supplies breeding stock to eastern Canada, the U.S. and occasionally to other countries as well.

Over the years, along with adding better ventilation systems and automated controls three years ago, the Judges started installing cameras at their poultry (and pork) facilities. They had had some thefts and vandalism incidents, and their insurance company recommended exterior cameras as the best option for security. At the time, they also decided to install interior cameras, which accomplished a number of important goals. “We can monitor the birds and check that the barns have power from any internet connection in the world,” says Judge. “We can move the camera around, zoom in. So the cameras are about security, but also barn operation and biosecurity as well.”

Just recently, in April 2014, LED lights were installed in all their broiler barns to achieve greater efficiency and higher light output. Judge says the cost return should be achieved within five years, but with increasing electricity rates to come in Ontario, it may come sooner.

The Judge family also grows corn and soybeans on 3,000 acres of owned and rented land and sells a large portion of their corn to their feed suppliers, from which they buy both poultry and hog feed. With the land located on the Sand Plain of Norfolk County, dry years presented yield challenges, and it was in 2012 — a year in which extreme heat and drought led to field corn crop failure — that the family decided to act on research they had been conducting for two years into ensuring a good crop every season.

“Our normal yield per acre for corn is around 150 to 175 bushels, but on some of our sandy drought-prone land, it’s a struggle to get much more than 100 bushels per acre,” explains farm manager Todd Boughner. “We need to increase that.” The quest to do better started in 2010 with testing drought-resistant corn varieties, and working on some related projects by themselves and in partnership with various companies and academics. Over time, the focus came to rest on creating a system that would completely take concern over future weather patterns out of the picture: subsurface irrigation.

The idea had sprung from the installation of a simple lawn-watering system at the home farm a few years before. Discussions followed with local irrigation suppliers about subsurface systems for crops, but there was no data or experience with these types of systems anywhere near Canada – just in the southern U.S. where the heat is so strong. So, if the Judges wanted to proceed, they would have to blaze the trail. With Boughner and others, they planned a field irrigation pattern, sourced components, and began designing and building the equipment. “It took time to determine an optimum irrigation schedule, and to create a wireless monitoring system to regulate water flow,” Boughner says.

The year 2013 saw them turning on their state-of-the-art, wireless, farm-created subsurface drip irrigation system on 75 acres of one of their farms, a system that is now in the early stages of commercialization. It also gained Judge Farms a 2013 Premier’s Award in agricultural innovation.

The setup also required the enlargement of a farm pond, which they were only able to draw from with a permit. “The small water usage requirements  — about half — with sub-surface irrigation made it easier to obtain the water-taking permit in comparison to conventional technologies,” Boughner explains. “A pond that supplies at least 100 acres of overhead watering can supply 200 to 250 acres of sub-surface drip.”

The capital cost of the entire system was about $1,500 per acre, with cost return reached in only a few years. “We believe the irrigation increased the yield on that farm in 2013 by 45 to 50 bushels, but it was a good year from a rainfall standpoint,” says Judge. “In a drought year, we believe it will increase yields by 100 to 150 bushels, which boosts farm income considerably.” The ongoing workload (only one person required) and operational cost for the system is minimal, and it will be 15 to 20 years before major replacement work will be needed.

This farmer-developed technology is attracting a great deal of farmer interest among field crop, tobacco, orchard and vegetable growers. “Farmers have a challenging time these days, and if they can maximize underutilized land, that is very beneficial to the bottom line,” Judge notes. “We will likely do another farm with drip irrigation in the near future.”

Judge Farms is also one of the founding members of Farm Fresh Poultry Cooperative (FFPC) in Harriston, Ont., and Jim Judge has been president since 1997. The venture involved a group of about 30 farmers buying an existing plant and expanding it. “We process the birds from one of our barns there,” Judge notes. “We are very pleased with having gone into the venture as it provides us with another ongoing option for processing.” He believes supporting new markets and value-added products is important for farmers.