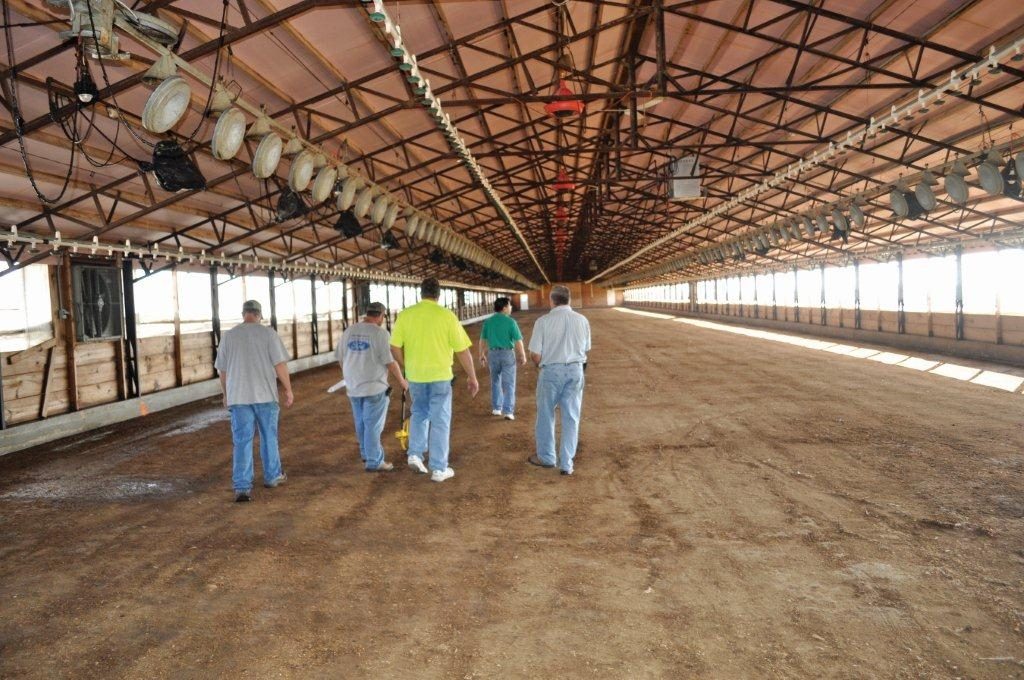 Xu, the turkey farmer and the construction team walk through the turkey brooder house which is 55 by 355 feet. Holliday spends an average of $50,000 per year to heat the turkey barns. University of Missouri.

Nov. 16, 2012 – While Americans prepare to heat up millions of turkeys in their ovens on Thanksgiving, a geothermal energy system developed by a University of Missouri engineer will be keeping live turkeys toasty during the chilly autumn weather. In a prototype facility, environmentally and economically friendly geothermal energy is now keeping turkeys comfortable during both cold and hot weather. The geothermal system reduces utilities costs for the farmer, which could bring down the price of turkey meat and keep America as the world’s top turkey exporter. Using geothermal also improves the bird’s air quality.

“This is the first application of geothermal energy in a commercial livestock operation,” said Yun-Sheng Xu. “Our first set of performance data suggests that farmers could halve their heating and cooling costs. We have five units installed at the test farm. Other farmers could begin installing units on their turkey farms as soon as next year, for use next winter.”

Heating and cooling is important in turkey operations because the temperature in their enclosure must be kept at 90 degrees Fahrenheit while the birds are young, but lowered to 70 degrees F for older birds. Propane fuel for temperature control units can cost farmers tens of thousands of dollars per year. Propane burners in livestock barns produce humidity and carbon dioxide, which can smother the birds. Humidity in the bird barns moistens the foul waste from the fowl and leads to ammonia contamination of the air the birds breathe.

“Similar systems could be installed in other livestock operations,” said Xu. “It may work even better in a chicken coop, since they use solid walls as opposed to the curtains used to enclose turkey barns. Pig and cattle rearing facilities could benefit from the inexpensive hot water produced using a geothermal system. The system could even be scaled down to keep a doghouse comfortable in the backyard.”

Once a geothermal unit is installed, the operation and maintenance are much lower than operating a fossil fuel powered system. Geothermal systems use the constant 55 to 65 degrees F of the soil a few feet beneath the surface to regulate the temperature of a liquid flowing through buried tubing. Xu’s design is cheaper to install than other geothermal units. In his system, the tubing is buried horizontally, as opposed to other systems that rely on vertically placed tubes, which require expensive deep digging.

Using Xu’s system, a turkey farm can be both more economical and better for the environment than a farm run on fossil fuels. Geothermal energy produces no greenhouse gases and isn’t dependent on wind or sunlight. In addition to this, the system uses an artificial wetland above the buried tubes to further insulate them. The wetland provides critical habitat to amphibians, migratory birds and other wildlife.

For more information, please see this article in the MU Engineering magazine: http://engineering.missouri.edu/2012/06/laying-the-groundwork-for-agricultural-use-of-groundsource-energy/