Features Producers Profiles By his own admission he says there is a lesson to be learned and he gains new skills that help him meet the next challenge and improve how he manages his egg farm. Kurt Siemens is a man who loves to learn. From every challenge Poultry Production

He sees everything he does as a learning experience 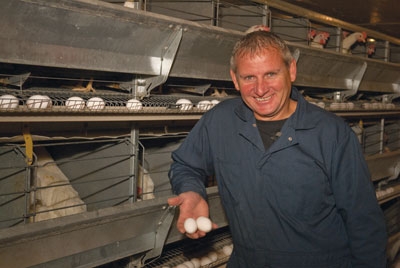 By his own admission, Kurt Siemens is a man who loves to learn. From every challenge, he says there is a lesson to be learned and he gains new skills that help him meet the next challenge and improve how he manages his egg farm.

But in 1983, Siemens said he felt he didn’t yet have the knowledge to manage his family’s cattle, grain and layer operation in Sanford, Man., after the death of his father. His elder brother had already left home and was working out of province, and his mother sold to a nearby Hutterite colony, keeping only 16,000 layers of the original 25,000 and relocating the family to a smaller farm in Rosenort.

By 1993, Siemens and his wife Tami had purchased the farm from his mother and expanded the flock by another 4,000 birds. In 2002, they decided to re-cage the barn, installing three tiers of Hellman cages. The set-up in his barn provides Siemens with the opportunity to be part of research trials for his local feed company (Nutreco-owned Landmark Feeds), something he has a great interest in and a tradition that began with his mother.

Since he is able to collect eggs from individual tiers, this allows Nutreco to measure results from different trials without environmental factors skewing results, as the birds are housed in the same barn under the same conditions. Siemens says he knows when there is research being done only part of the time, and he likes it that way. “It’s good because I have no preconceived notions this way. Sometimes when you think something should happen, does it really happen? You really don’t know until you look at the data,” he says.

He is also currently working with Manitoba Agriculture, Food and Rural Initiatives (MAFRI) to determine if there is an available technology that will allow him to have drier manure in his barn, a need driven by the upcoming ban on winter spreading of manure, which takes effect in 2013. Depending on the length and severity of the winters, Siemens says he needs to be able to stack his manure higher in his existing manure holding facility without having to add on to it. “It’s a theory of mine at this point, so I am looking at different options,” he says. With MAFRI, he has been testing a tube dryer system that will fit under his cages, but nothing has worked 100 per cent. Part of his theory is to add a fourth row, to reduce the number of birds per square inch, allowing for better drying of manure. He’s currently looking at different options (conventional cages vs. enriched) and plans to install a full row of furnished housing this fall.

“I always want to know what’s happening with technology,” he says. “I like to be on the leading edge of what’s best for the hens in my care.”

A director with the Manitoba Egg Farmers (MEF) since 1998, serving as chair from 2001-2009, Siemens has been a “guinea pig” for MEF trials in addition to his participation in feed and MAFRI research. He was one of the first producers in Manitoba to get a conservation permit for composting spent hens, and his farm’s proximity to Winnipeg allowed him to be a test farm for two avian influenza simulations conducted by MEF, the Canadian Food Inspection Agency (CFIA) and MAFRI. The second trial involved in-barn gassing, with the operational part of the trial conducted in Winnipeg. Having 100 government and industry representatives in full biosecurity gear descend on his farm gave him a new appreciation for what his fellow producers went through during the avian influenza outbreak in the Fraser Valley in British Columbia in 2003, but he was also “proud to do this for my industry, and to fully realize all of the steps involved,” he says.

He says it also allowed him to get to know those who would be involved from MAFRI and the CFIA should a real-life situation present itself. “It’s good to build this type of relationship, so if a situation should arise, I can sit down with these people and have a real conversation and be involved,” he says.

Siemens has learned the value of building relationships and how to find common ground when faced with differing opinions during his tenure with MEF, and particularly as his former role as the organizations’ alternate to the Egg Farmers of Canada (EFC), and his current role as its EFC representative.

Siemens says that being an EFC representative is “a challenging role as well as rewarding.” One of the greatest challenges is having to represent not only the interests of Manitoba producers, but the MEF and the provincial government as well. “But at the table, you are representing Canada. You need to learn when to wear the provincial hat, when do you change the hat, and should you be changing the hat at all?” he says. “It’s a juggling act, and it needs to be done in a positive way.” He says that sometimes it might be best to vote for something that’s good for all of Canada, but it might not necessarily be in the best interest for Manitoba. “Ultimately, the aim is to do what’s best for supply management in Canada,” he says.

Siemens’ biggest challenge with the EFC occurred in the spring of 2010, when he had to face the EFC after the MEF’s decision to instill an animal care policy for laying hens whereby all regulated egg farmers in the province who build new facilities or undertake a major retrofit after 2018 must install a housing system that supports the Five Freedoms, as laid out in United Kingdom’s Brambell Report. Although the MEF board had been working on the policy for some time, they were forced to release it a little earlier than anticipated. MEF had planned to launch the news after discussing it with EFC and other provinces, but a leaked rumour fast tracked the announcement.

“The EFC was caught by surprise, but we did what we thought we had to do for our producers in Manitoba,” he says.

“Sometimes, being a director requires making difficult decisions”, says Kurt. However, this is an example of where having relationships in place is key, as “you can blow off steam, then go for dinner and talk about how to move forward, rather than let an issue become a stumbling block.”

The experience Siemens has gained from his time with the MEF and EFC has also served him well on a personal level. He lives in an area that is prone to severe flooding, and this experience has helped him deal with the stress of flooding in his area, as well as dealing with neighbours and municipal councils on flood-related issues. He says his experience with the poultry industry has taught him how to accept the ideas of others yet be able to discuss an idea he feels strongly about, and how to bring his viewpoint forward in a positive way. “You need to be able to adjust your opinion. If you can have the best possible outcome from four different opinions, it’s the best option,” he says.

Siemens has also devoted his time and experience in his community. One of his favourite things as an MEF director is interacting and sharing his experience as an egg farmer with the public at the Royal Manitoba Winter Fair in Brandon and the Red River Exhibition in Winnipeg, and showing them the “technology that goes into producing an egg.” He has also served as chairman of his local recreation association, coached hockey, served on the board of directors for the Rosenort Chamber of Commerce, and is on the board of his church.

He acknowledges that he would not be able to do what he does without the support of family: wife Tami, daughter Madisson (18), son Harley (15), and son Eyob (9), the newest addition to the family, having been recently adopted from Ethiopia in November.

Siemens says he is sure there will come a time when he will step aside and let someone else take over, “but I am sure I will find something else to do,” he says. “Everything is a learning experience.”