Updates on whole-farm gassing systems and portable units for humane and efficient euthanasia. 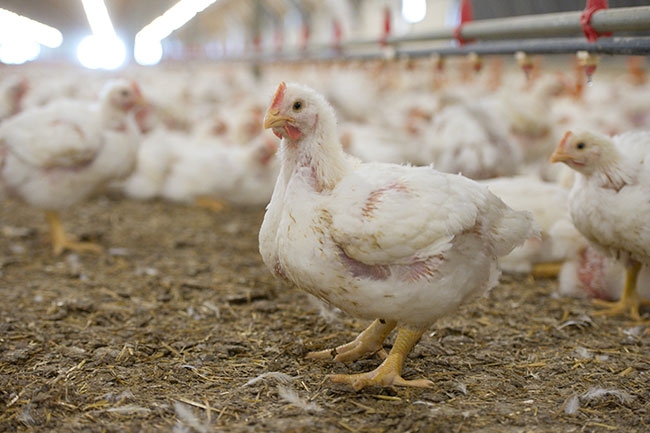 In late 2017, the Poultry Industry Council reported that, “increased numbers of reovirus-associated lameness cases were reported in Ontario broiler flocks by poultry veterinarians between August and October.” It was necessary for some infected birds to be euthanized.

Due to this situation and the possibility of other future disease outbreaks, there has been some renewed interest from the Ontario poultry commodity groups in how to best euthanize large numbers of cull or diseased birds. Processors have also been involved in these discussions, notes Canadian Poultry and Egg Processors Council (CPEPC) president Robin Horel.

Gassing is preferable to other methods of euthanasia when a large number of birds must be destroyed, as it’s humane, cost-effective and fast.

Solutions for whole-barn gassing and also mobile cart options for depopulating a part of a flock (for example, one floor in a two-storey barn) seem to both be needed.

Current discussions are focussing on mobile solutions that have been validated to be humane and follow established euthanasia guidelines, as well as overall euthanasia costs, who will bear what costs and why, and whether third-party providers should be involved.

Regarding whole-barn gassing, Egg Farmers of Ontario (EFO) general manager, Harry Pelissero, stated to Canadian Poultry magazine in early 2018 that his organization tried a carbon dioxide (CO2) system a few years ago and still use it when necessary in emergencies because it’s most effective and least stressful – but that to be effective, the barn must be airtight.

The Canadian Food Inspection Agency (CFIA) also states that in emergencies, it has used whole-barn gassing for large farms, “the method of choice for destroying a large number of birds in a timely manner during a disease outbreak. It is an internationally accepted method for humane poultry farm depopulation.”

Regarding the type of gas that should be used, Dr. Patricia Turner, who retired from the University of Guelph’s department of pathobiology in January, published a study with colleagues a few years ago on the use of CO2 gassing. She and her team noted that whole-barn depopulation with this gas “has been investigated as a humane and efficient means of killing large numbers of birds in the event of a reportable disease outbreak” and “has also been considered as a method for depopulating barns containing end-of-lay hens, particularly when there is limited local slaughter and rendering capacity.” In their research, they found laying hens lost consciousness within two minutes of high CO2 levels and were brain dead within five minutes.

Mobile gassing units update
In terms of mobile systems, Turner stated in early 2018 that at this point, “there is no approved portable gassing chamber for poultry in Canada, and in fact, we have shown in the past that dumpster-style containers are inhumane.”

However, some feel that mobile units are necessary to prevent suffering of ill birds when no other options exist. In 2003, for example, researchers in the Netherlands reported that during an outbreak of avian influenza there, “30 million birds were killed on 1,242 farms and in more than 8,000 hobby flocks, by using mobile containers filled with CO2, mobile electrocution lines and by gassing whole poultry houses with carbon monoxide or  CO2…Gassing with  CO2 was considered preferable. However, this method is not suited to all types of housing and in these circumstances mobile killing devices were a useful alternative.”

Furthermore, the CFIA states that mobile units “may be useful for the destruction of small flocks. Although the CFIA does not currently use mobile gas chambers, they are considered an internationally-acceptable method for depopulation of poultry.”

In 2008, mobile gassing units were employed (along with whole-barn gassing and some cervical dislocation) in a strange situation in Ontario relating to pigeons. These birds were being reared by various farmers as part of what was uncovered as a large scandal engineered by the leaders of a company called Pigeon King.

“Producers were left with a very limited market for meat birds and holding barn operators were left with thousands of birds that no one wanted,” the Ontario Farm Animal Council (OFAC) stated in a discussion paper written in 2009.

A series of disease outbreaks prompted Ontario’s poultry industry to come together in search of humane solutions for large-scale depopulation.

“These challenges left many producers with little choice but to euthanize.”

Bianca Jamieson, media relations strategist at the Ontario Ministry of Agriculture, Food and Rural Affairs (OMAFRA), notes that whole-barn gassing systems are not only fast but also do not require the birds to be handled before they are euthanized. However, mobile gassing units have issues relating to both timing and handling.

“From an animal welfare and biosecurity perspective, it is advantageous to avoid handling the birds,” she states, adding that, “When using a mobile gas chamber, throughput speed can be an issue based on size and number of chambers and also how birds are loaded and unloaded.”

Egg Farmers of Alberta (EFA) has access to portable manifolds and standard operating procedures associated with these manifolds, which are based on policies and procedures provided by both the CFIA and Egg Farmers of Ontario (EFO), as supported by University of Guelph and OMAFRA research. Jenna Griffin, EFA industry development officer, has been working to develop a depopulation and disposal emergency program that outlines available and applicable depopulation and disposal methods, equipment, resources and processes for the poultry industry in the province.

One relatively new option for gassing smaller numbers of birds is the EuPoul, invented in Australia in 2014. It’s a square, airtight, portable enclosure gassing unit that can be inflated around groups of birds in minutes. The unit can be used individually or multiple modules can be attached together.

In Ontario, the Pigeon King situation in 2008 was certainly a learning experience about large-scale euthanasia for those in the poultry industry. Among many lessons that came out of the situation was the importance of working together.

OFAC states in the discussion paper that, “the successes achieved in assisting breeders and holding-barn operators and preventing animal cruelty could not have been realized had it not been for the co-operative efforts of a number of organizations, companies and individuals.” Key partners in the effort were OFAC, OMAFRA, EFO, a firm called Brian’s Poultry and the Ontario Society for the Prevention of Cruelty to Animals (OSPCA).